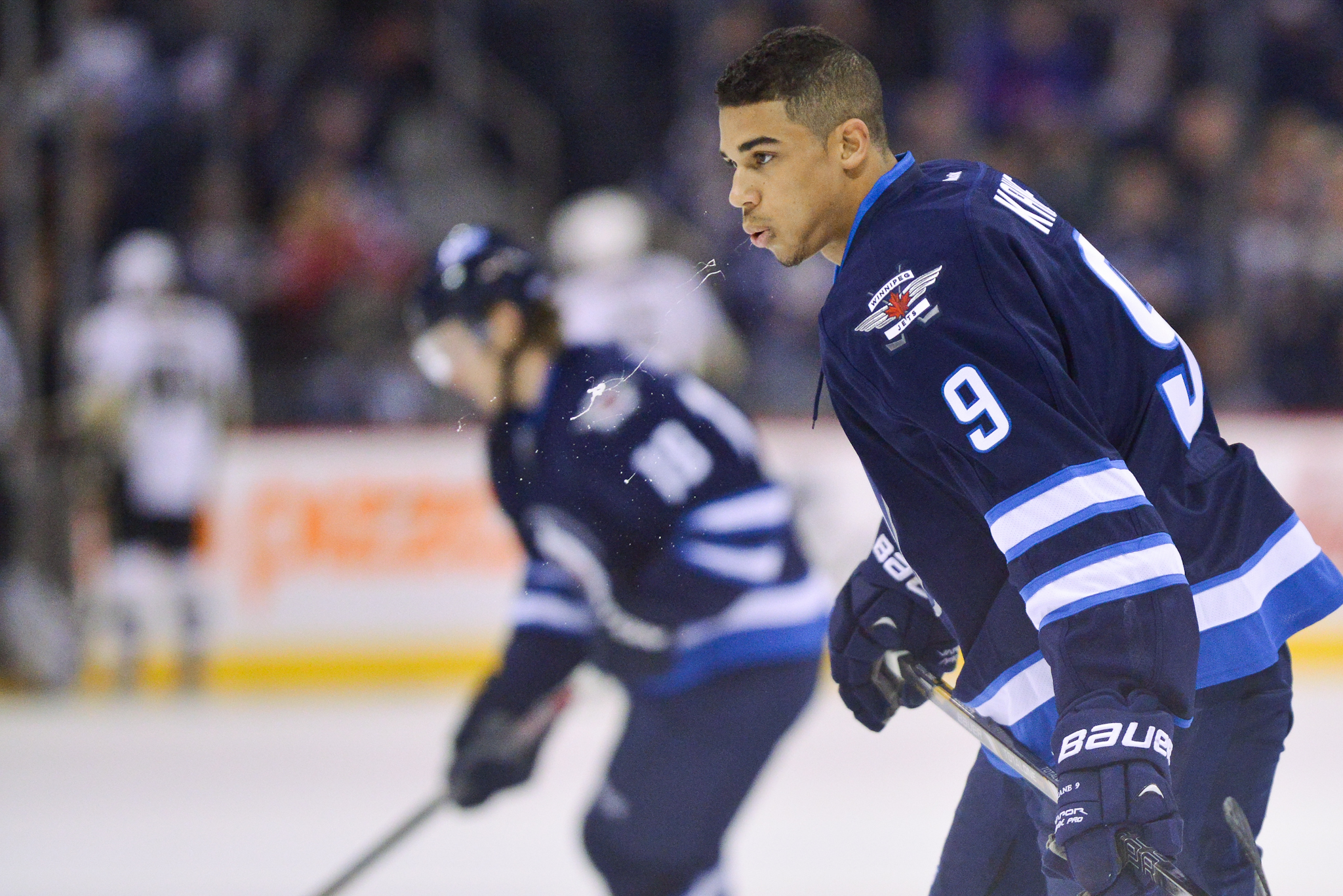 It’s hard to determine exactly when the Chicago Blackhawks will suffer their first regulation loss; through 22 games, they’ve only lost three games in extra time, so far amassing 41 points. As of press time, they will host the Minnesota Wild and Colorado Avalanche to play in back-to-back games, and their incredible streak could very well come to an end this week. Nevertheless, I predict that, with 26 games remaining, the Chicago Blackhawks will lose no more than 10 games in regulation this season.

That is to say, the Chicago Blackhawks will pick up points in at least 39 games this season, if not more. They would also have to be any sane person’s Stanley Cup pick at this point, as they’ve yet to show any crack in the armour and should run away with the #1 seed in the west.

The return of Redmond

Zach Redmond was enjoying a solid rookie year for the Winnipeg Jets, earning four points in eight games as a defender and slowly cementing a spot on the Jets roster when the unthinkable happened. In a gruesome example of how quickly things can go wrong, Redmond had his femoral artery and popliteal vein cut by the skate blade of a teammate while working out near the end of a Jets practice. Quick thinking and action saved his life, but his season is over as he works on his recovery.

My prediction here is that Redmond makes his recovery and plays for the Jets next year. The extent of the injury is what makes this bold in my mind, as it very well could mean his career is over. However, my faith in modern medicine and his hockey abilities make me believe that he will return to the ice, play, and win the Bill Masterton Memorial Trophy for the 2013-2014 NHL season. The Masterton Memorial Trophy is given annually to the player who best exemplifies the qualities of perseverance, sportsmanship, and dedication to hockey.

I figure someone has to do it, so I’ll go ahead and make a whopper of a prediction. THE word, the big one, the queen mother of predictions. I am saying that a Canadian team will win the Stanley Cup. Why? Because 20 years is quite long enough. Four Canadian teams currently sit in a playoff position (Montréal, Ottawa, Toronto, and Vancouver), while Winnipeg, Edmonton, and Calgary are not far out of the hunt. The odds have not been this high since the few years in the early nineties when the Quebec Nordiques were around and there were eight Canadian teams.

The two teams most likely to accomplish the feat are the Canadiens and the Canucks, as they are at or near the top of their respective positions, and have the depth on their rosters required to make a lengthy playoff run. Vancouver has the Sedin twins and a two-headed monster in net, as Roberto Luongo and Cory Schneider vie for playing time. Montreal has a healthy Andrei Markov, P.K. Subban, and backstopper Carey Price trying to end Montreal’s longest streak without a Cup.

Specifically, I think Chicago and Boston are going to steamroll their way into the Cup Final, but in order to better my odds I’ll say this will be the year of the original six team.

As of print time, all six of the original six NHL teams are well situated for a playoff spot (only New York sits one point out but has games in hand). The reason I make this pick, though, isn’t because I’m hot for NHL history, it’s because in a shortened season players who know their roles, and teams who have an established identity will hold a distinct advantage when all the chips are down.

Boston, Chicago, Detroit, and New York all have the same coaching staffs they’ve had for consecutive years and with a season as compact as this you can expect the message to be simple and consistent. Teams like Minnesota or Toronto might struggle with stability down the stretch, but familiarity with the system and the personnel will keep teams like the Bruins and the Blackhawks one step ahead of most right until June.

L.A. will make the playoffs, get bounced in round one

First, let me address a pet peeve of mine: the Stanley Cup hangover. The idea follows that teams who recently took part in a Cup Final will inevitably struggle the next year simply because the NHL schedule is too long and grinding for players to adequately rest and reset their batteries for another full season.

Those in sports media invoke the notion of the hangover with irritating regularity and the fact of the matter is: it doesn’t exist. Yes, the NHL schedule (regular season and playoffs) is brutal for the players but what we are actually seeing when Carolina fails to make the playoffs the year after they win the cup is evidence that the number of teams realistically battling for the Stanley Cup is much larger now than it ever was in the 80s or in the pre-expansion dynasty-heavy era of hockey.

Having said all that, I think the L.A. Kings will struggle to make the playoffs and get bounced as an eight-seed in the first round.

A lot of people forget that before the Kings turned into the world-beaters of the 2011-12 playoffs, they finished the regular season eighth in the Western Conference, almost dead last in team goals-per-game. The competition will be tough to get into the West playoff picture this year and L.A. may waste most of their energy getting their franchise onto the ledger in the first place. Look for the Kings to let their foot off the gas and exhale once the post-season begins, only to have the first seed in the west punch them in the stomach and carry the momentum.

Schultz runs away with rookie title

Granted, this year has been great in terms of rookie players but come season’s end the Rookie of the Year award will, without doubt, go to Justin Schultz of the Edmonton Oilers.

Players like Vladimir Tarasenko, Cory Connacher, and Dougie Hamilton all deserve recognition for their stellar play but the fact of the matter is no first-year NHLer plays a larger role on his team than Schultz. The former Anaheim draft-pick consistently plays more minutes than any other player on his team (not to mention all rookies), taking the brunt of the defensive assignments while quarterbacking the power play on a nightly basis.

Schultz may not be the leading scorer for all rookies when the season ends, but his importance to his team will be unmatched by the rest of the 2012/13 freshman crop.

Okay, I’ll say it; I’m biased when it comes to the Winnipeg Jets. I’m not quite drinking the passion fuel like some other Jets fans you might see on twitter or on game day, but I boldly predict that the Winnipeg Jets will make the playoffs this year, either as the division leader or as the eighth seed.

The Jets are in quite possibly the softest division in the NHL, so it’s really anyone’s guess who’s going to end up in what will likely be the third seed in the East. I believe the Jets — who got off to a bit of a slow start but have built momentum with a strong road trip along the east coast — have the right mix of grit and scoring to earn a playoff spot. Playing without Zach Redmond and Anthony Peluso for the time being (the rest of the season in Redmond’s case) will be difficult to overcome, but if the team’s scorers can continue to put up points (Looking at you Andrew Ladd, Blake Wheeler and Evander Kane), I see the Jets rising to the top of a very weak division and making a playoff run. And, at the very least, we’ll be free from paying Nik Antropov’s bloated contract.