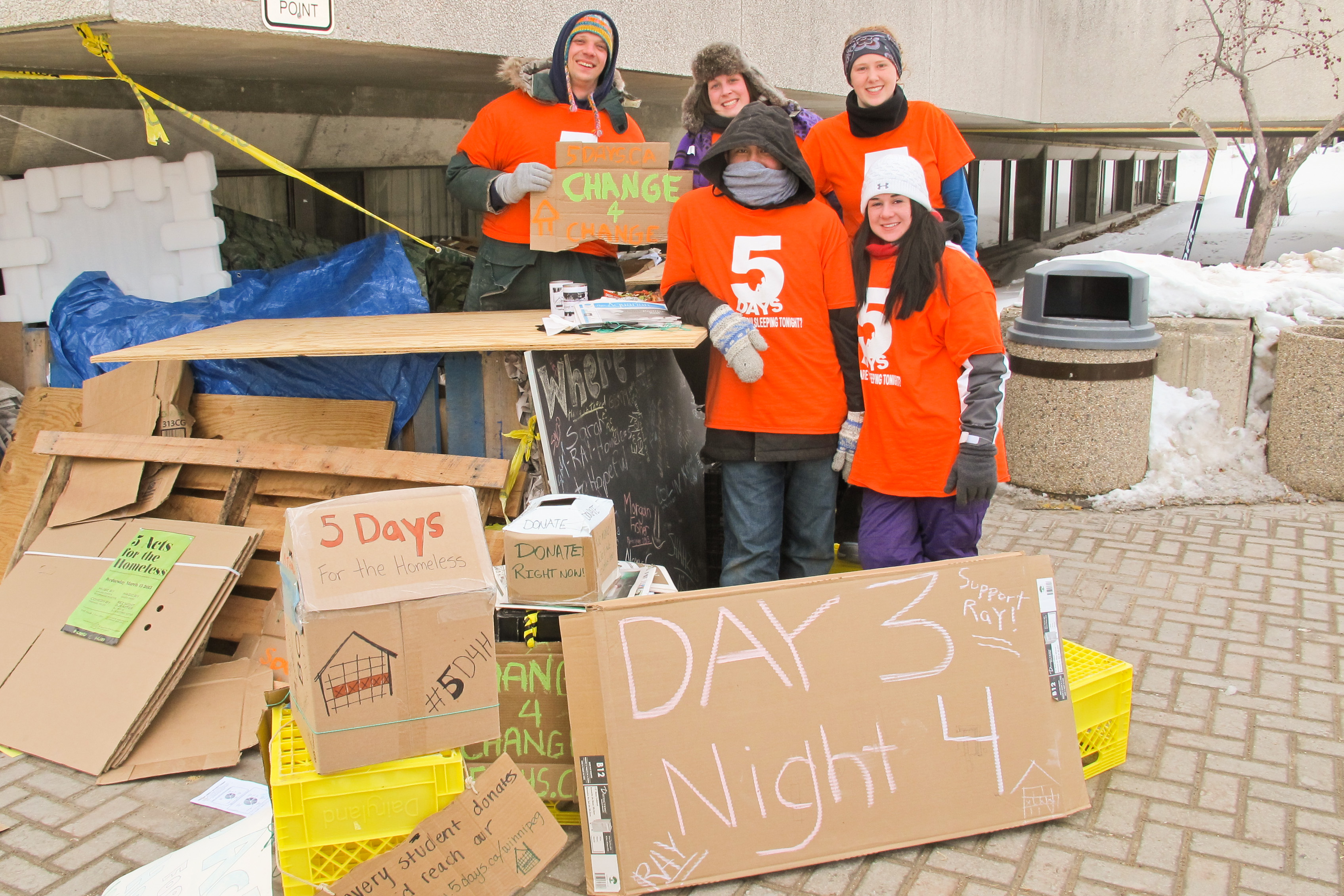 Five Days for the Homeless (5DH) seeks to raise awareness around the issue of homeless and at-risk youth, while also collecting funds and resources for local charitable organizations.

While the Winnipeg group acknowledged that their five-day stay was at times uncomfortable, they were also careful to note that they were not intending to perfectly recreate the adverse situations faced by youth without homes during the winter.

“It has been cold and uncomfortable and we’re not used to sleeping outside [ . . . ] It is important to realize, though, that we are not trying to simulate homelessness. That’s why we call ourselves ‘temporarily displaced.’ The idea is to start a conversation, not to recreate homelessness,” said Emily Ashley, one of this year’s participants, on the last day of the campaign.

“We could never truly understand what it is like to be on the streets. We’re so appreciative of the support we’ve been given but, at the same time, we realize that if we were actually homeless, we wouldn’t have the food and the support that we have been receiving,” she continued.

In addition to the six participants sleeping outside of University Centre, volunteers have been scattered throughout campus, helping to collect monetary and used clothing donations – all of which will be donated to the Winnipeg-based organization Resource Assistance for Youth (RaY).

“RaY has a number of projects that they organize throughout the year for homeless youth. The way that they fund all these things is through government grants and funding, and sometimes those grants don’t go through. So what this money is going to do is fill in any gaps in their funding to help them continue to help youth living on the streets,” explained participant Khrystyna Prokopovych.

“A part of their goal with any funds we provide them is to create more outreach,” added Janelle Remillard, another of the six Asper students.

Participant Morgan Fisher told the Manitoban that RaY also provides a space where youth living on the streets can build camaraderie with staff and with each other, which would otherwise be unlikely.

“RaY is similar to a family. Youth go there and make connections and friends. They can hang out for the day and have a good time.”

During their week enduring the cold, the 5DH participants were visited on more than one occasion by Winnipeg youths who regularly utilize the services provided by RaY.

Justin Monton, another of the six students participating this year, told the Manitoban that talking with a youth from RaY helped him answer a question that had previously troubled him – the question of how to get people living on the streets motivated to take advantage of RaY’s support services.

“I asked one of our visitors from Thursday that question and she told me, ‘you just have to go out there and level with people.’ She said that it is important to get out there with pamphlets and information, to make people aware that there are support systems throughout Winnipeg that are available to them,” said Monton.

The 5DH campaign also held an event at the Hub on Mar. 13, called “5 Acts for the Homeless.”

“It was a huge success,” said participant Colin McDougall. “It was a great turnout, the acts were awesome, and they raised so much money [ . . . ] A lot was from ticket sales, but what was really amazing was that they raised about $1,700 just by passing a box around mid-show.”

“That proves how involved people want to be. They might not always be volunteering, but they came to the show, bought a ticket, and with 100 or 200 people raised a lot of money just with one passing of the box.”

The 5DH participants said they were looking forward to continuing to advocate on behalf of homeless youth in Winnipeg after the campaign.

McDougall, for one, says he will continue to volunteer with an organization that he has been involved with prior to the 5DH week.

And at the end of the day, Remillard says she has changed the way she views the problem of homelessness.

“My attitude has changed tremendously. I was always sympathetic, but not completely. Now that I’ve had this experience, I’ve made the promise to myself that I’m never going to walk past a homeless person without at least making an effort to talk to him or her and donate some change or whatever I can.”