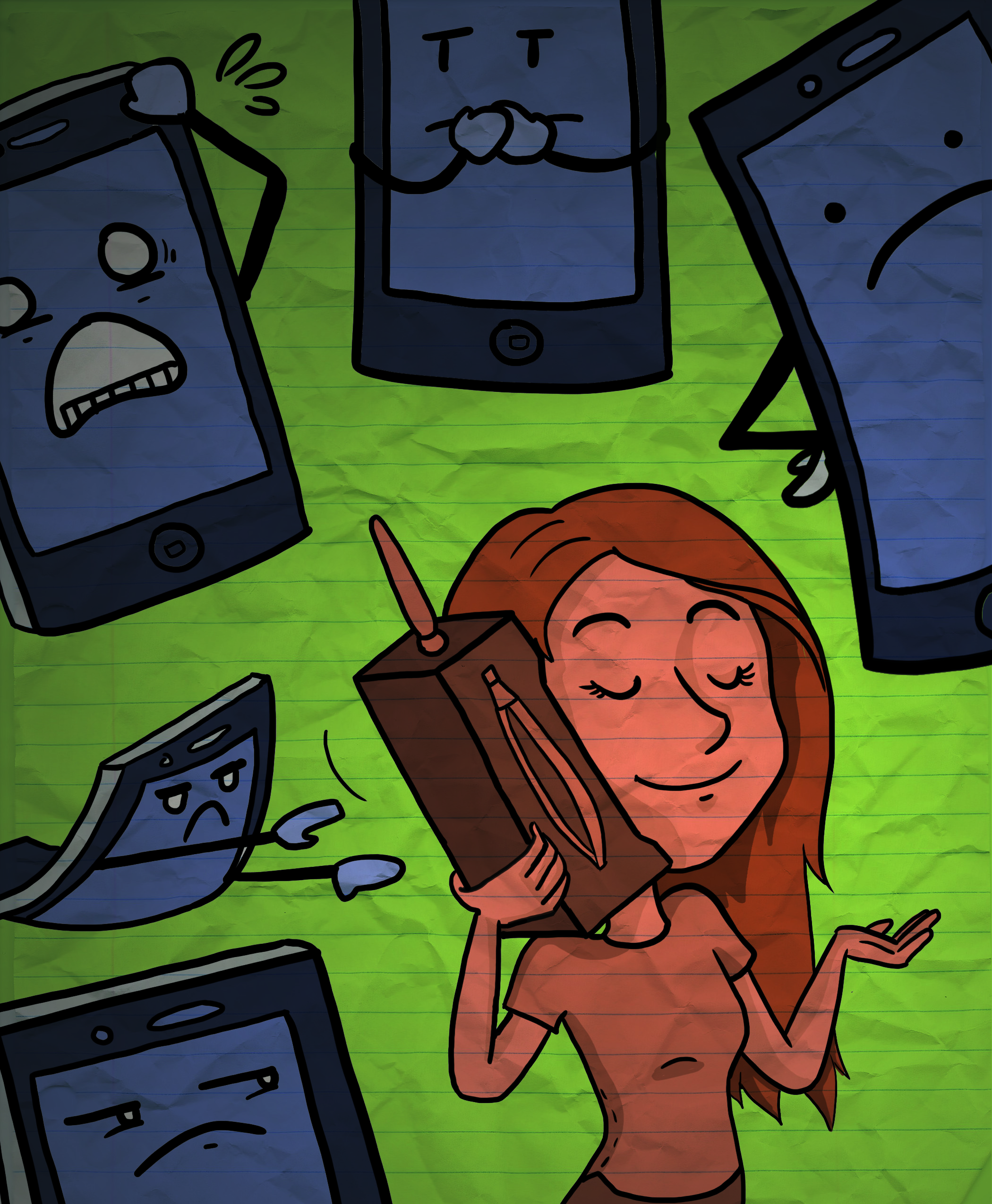 The iPhone: god’s gift to man. Or so that’s what marketing schemes have almost led me to believe. The iPhone is only one example from an army of technology: phones, musical listening devices, and computers. Once the newest advancement or updated version of that device appears beneath its shiny plastic package, that new product covers and replaces the older versions like a white sheet. Once that new product is out in stores, we are expected to stand in line, like so many do, to obtain it. Anyone using a previous version will be outcast until they acquire the newest creation.

As consumers, we are always told to buy the next new thing, and we don’t question this idea; we just buy. Through marketing, companies guide us in the “right” direction with this pressure: the latest phone product may have an application that the previous version didn’t have, or the newest laptop has a faster processor, or the newest iPod has a larger screen. All of a sudden, the vibrant thing we got for our birthday two months ago isn’t good enough – it is now labelled old and rusty.

Why resist the adoption process? Here are some thoughts from someone who isn’t so willing to readily adopt the next technology that becomes available.

I am surrounded by the iPhone to the point where I almost believe that happiness is dependent on that iPhone, that I will be more content with my life if I own it. This is drilled into my head more and more with every passing day. The more I notice it used by students at school or a likeable celebrity on Twitter, the more I think I should have one. But I resist.

When I came across Geoffrey Moore’s book Crossing the Chasm, I was informed that there are different types of people with different types of approaches to adopting new technologies. I soon discovered that I was in the furthest and least appealing category: I was a laggard.

Any technology diffuses into the marketplace with five kinds of customers. First come the innovators, the ones who start the trend. Then come the early adopters, the risk takers. They are followed by the largest presence of technology adopters: the early majority and the late majority, three and four, respectively. The last group is the one I fall into: the laggards. Just as the title suggests, we lag. We hold up the line of progress; we withstand the newer technologies and typically don’t adopt them until we have no other option.

The product you had in your hands the second you heard about the newer version still functions the same as it did before you heard about the latest advancement. When there was no other option, you were content with what you had. And if we go back a little further, we were perfectly satisfied with the cell phone when it first arrived on the market. It performed its function, which was to talk on the phone while on the go. Until we had heard of texting, we didn’t “need” it, and we got along without it.

Each new development carries with it a state of discontent. That is why I partly detest “improvements” to trivial technological devices, especially when there was nothing wrong with them in the first place.

When using a computer I want to be able to type out my documents and go on the Internet. I don’t care about the fancy new sidebar or the complicated new way to navigate the desktop. In fact, I want things to remain as simple and as close to the past computers I have used as possible. In cases like this, innovation creates more confusion than gratification.

When I want to listen to music while walking from point A to point B, I only need something that will allow me to do just that: listen. I don’t need to watch music videos while I attempt to cross the street, and I don’t need the newest colour of the iPod in order for it to perform its function.

As long as a product is still operating properly, there is nothing wrong with it. We functioned before these products existed, but, again, inventions generate new and complicated “needs” that are not actually needs.

Laggards: talk on your flip phone (if older versions of the cell phone still existed I’m sure we’d make use of them) and use your “outdated” MP3 player or iPod with pride.

Don’t be afraid to question these marketing schemes, and certainly don’t be pressured to conform and buy things that you don’t need.

Android vs. iPhone: What’s the difference?