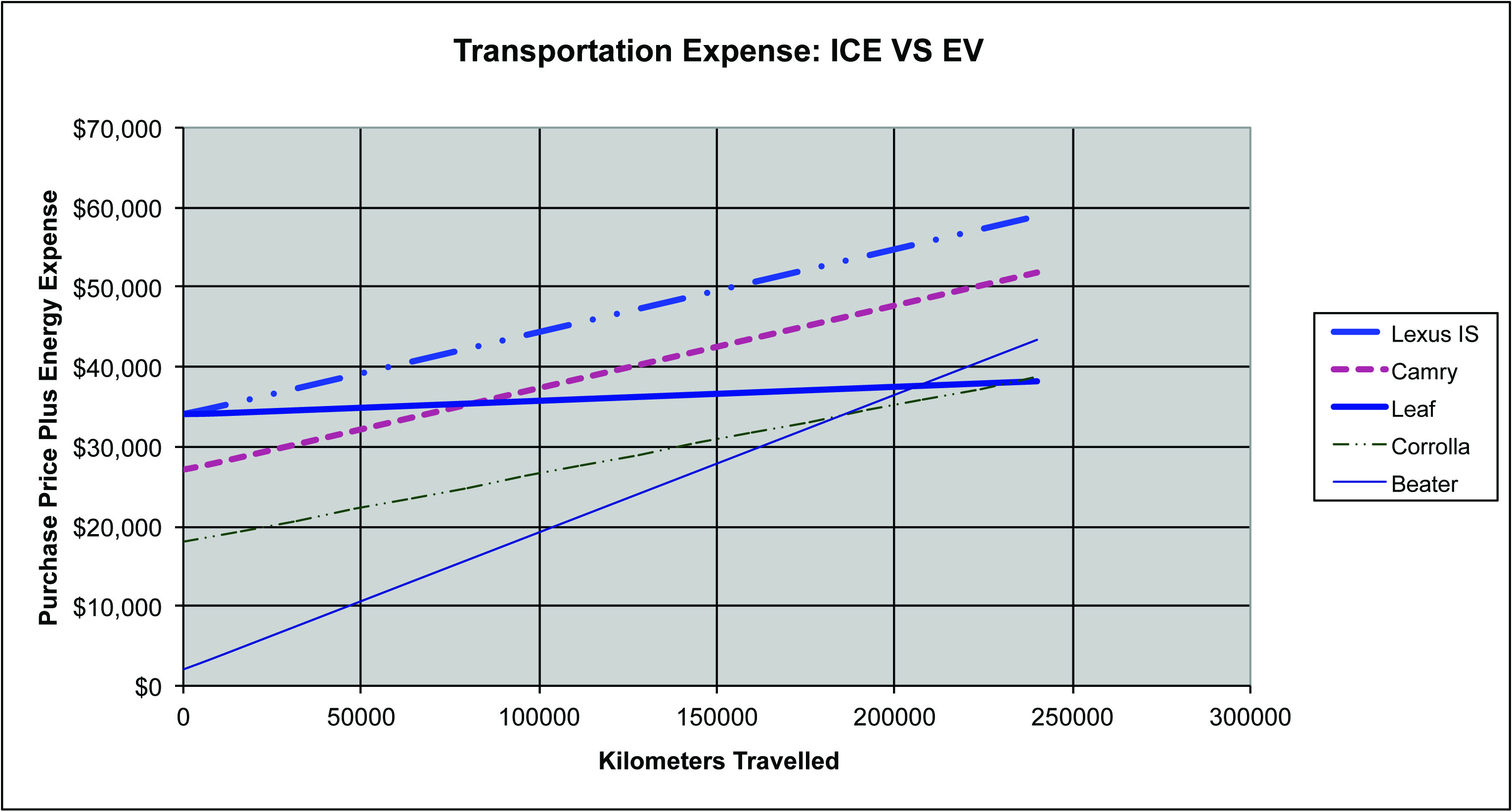 To an individual consumer, one of the biggest benefits of owning an electric vehicle (EV) is the very low operating cost. The gasoline expense adds up over the life of an internal combustion engine (ICE) vehicle, whereas electricity is relatively cheap, especially in Manitoba.

According to the province’s Electric Vehicle Roadmap, the average Manitoba ICE vehicle requires about 15 litres of fuel per 100 kilometres (km). Driving on average 16,000 km over the course of a year, as Manitobans do, requires 2,400 litres of fuel. At only $1 per litre, the annual fuel cost would amount to $2,400, which works out to 15 cents per kilometre.

An electric vehicle, by contrast, will cost much less for energy. The Manitoba Electric Vehicle Association (MEVA) states that driving electric vehicles is like driving for 15 cents a litre. At this rate, to cover the same 16,000 km in an EV it would only cost about $360, which works out to 2.2 cents per kilometre.

There have been reports of even lower operating costs. In 2010, UBC students converted a Volkswagen Beetle and drove approximately 6,400 km from Vancouver to Halifax, charging at RV parks along the way. Their estimate of the electricity expense was only $64, which is about 1 cent per kilometre.

The savings in energy expenses can then be used for the down payment on a house, investments, or season tickets to the Jets.

The Mitsubishi Miev and Nissan Leaf currently sell in the range of $32,000 to $40,000. While this may cost more than some vehicles, eventually the total cost of ownership over the life of the vehicle may be cheaper than other ICE vehicles. The graph featured lists the initial purchase price, plus the cumulative energy expense of driving different vehicles over distances. Sidebar: this graph is deliberately simplified and does not include any other variables, such as interest rates, inflation, maintenance costs, insurance, depreciation, rebates, etc.

A big concern that many consumers have is that electric vehicles won’t drive 500 or 600 kms on a single charge, as ICE vehicles do. However, how many times a year do you drive this distance in a single day? Studies have shown that on a daily basis, 80 per cent of commuters drive 80 km or less, and 50 per cent drive 40 km or less.

Winnipeg is a relatively small city, unlike a metropolis such as Los Angeles, or other big American cities. Using the Perimeter Highway as a boundary, Winnipeg is only about 30 km from east to west and north to south at its longest distances. Using data loggers, Dr. Eric Bibeau from the U of M’s engineering faculty conducted a detailed study on Winnipeg commuters, and concluded that the size of the batteries could actually be reduced in size by around 40 per cent. As a daily commuting vehicle in Winnipeg, an electric vehicle makes a lot of sense!

For those concerned with driving long distances, a new company, Sun Country Highway, has begun installing charging stations all across Canada, with the idea of making cross-country trips by electric vehicles possible and practical.

Public policy
The Manitoba Electric Vehicle Roadmap has estimated that Manitoba spends between two and three billion dollars importing fossil fuels each year. At the same time, Manitoba Hydro generates an abundance of “clean” electricity, so much that Hydro exports surplus energy to the U.S.A. About 98 per cent of the electricity comes from renewable energy sources such as wind and hydro. The Roadmap states, “We could easily convert one of our greatest energy weaknesses (imported fossil fuels) to one of our greatest strengths (hydroelectricity).”

By switching to electric vehicles, less money would leave the province, and there could be an economic multiplier effect. The local economy would get a boost, as if the government engaged in public spending. However, there would be one important difference: the “spending” would not need to be recouped by higher taxes at a later date. The benefits would come via greater efficiencies arising from the technological shift.

In conclusion, the case for electric vehicles can be summarized as follows. From an environmental standpoint, EVs are many times cleaner than traditional ICE vehicles. From a consumer standpoint, EVs cost much less to operate, require a notably lesser degree of maintenance than ICE vehicles, and pay for themselves in the long run. From a public policy standpoint, EVs would reduce fossil fuel imports and, by using locally generated electricity, create a local economic multiplier effect. Go electric!

Rodger Lepinsky is a U of M alumnus and a member of the Manitoba Electric Vehicle Association: manitobaev.ca

If you don’t vote, don’t complain