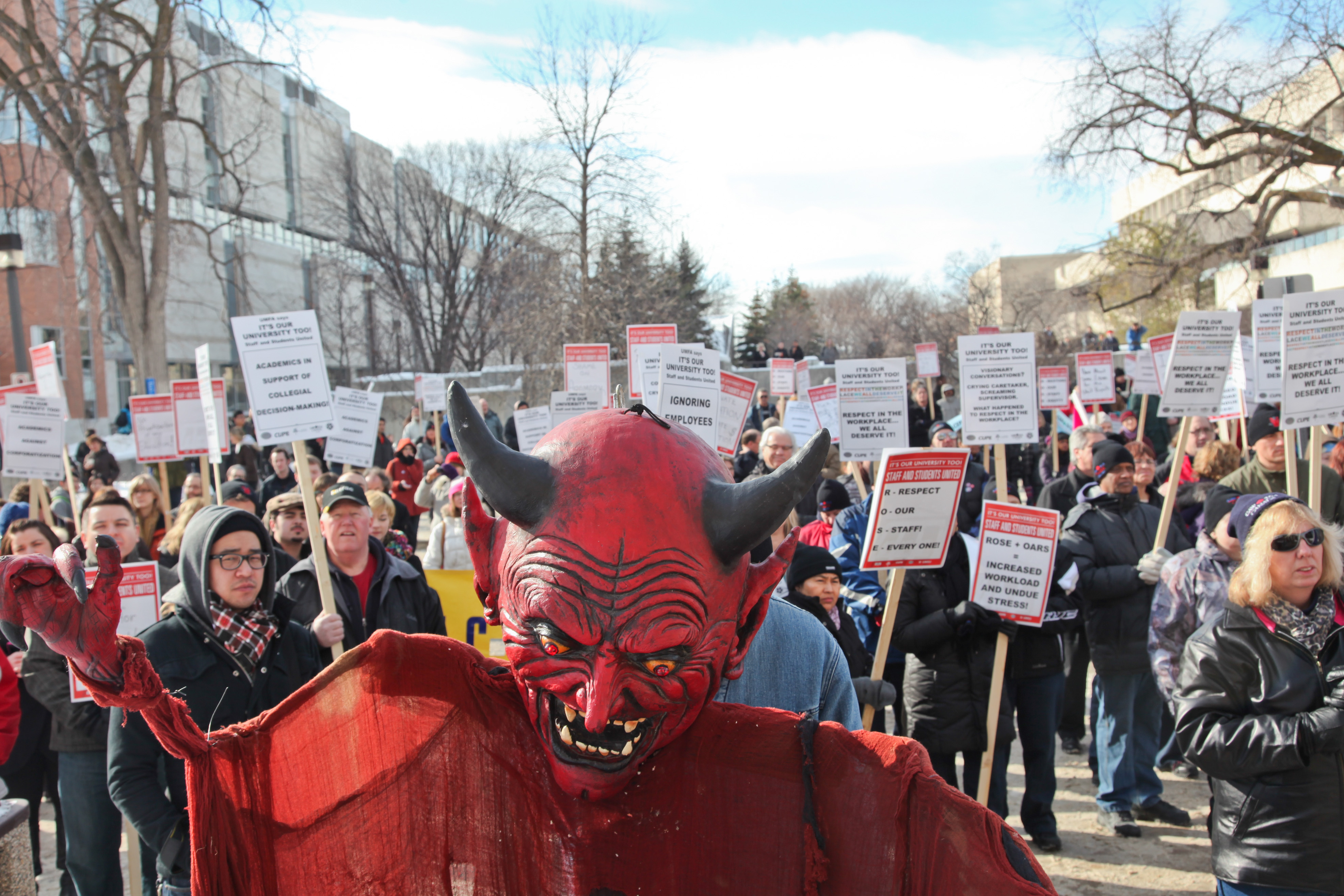 Along with five campus labour unions, the University of Manitoba Students’ Union (UMSU) held a rally at Chancellor’s Circle, outside the administration building, on Wednesday, Feb. 13 to protest various forms of privatization at the U of M.

Additional unions present to protest included the University of Manitoba Faculty Association (UMFA), CAW Local 3007, AESES, and CUPE locals 3909 and 1482.
A flyer distributed by UMFA lists many grievances that the union, which represents U of M academics, has with the administration.

Among these are confidential corporate contracts, which “place unnecessary restrictions on academics.” One such contract with Xerox includes “penalties for faculties and departments who make less than a minimum or more than a maximum number of copies.”

UMFA also takes issue with the presence of the International College of Manitoba (ICM) on campus. ICM is run by Navitas, an Australian company, and is involved in recruiting international students for pre-university courses held on the U of M campus.

Previous reports by CBC and the Manitoban discussed how ICM has been accused of misleading students into thinking they are registered as University of Manitoba students, when in fact they are not.

Kevin Scott, a senior instructor in the department of biology, spoke with the Manitoban about why UMFA takes issue with ICM.

“They’re using equipment that science students paid for in their teaching labs, in rooms that all taxpayers pay for to make money for an Australian company,” said Scott.

“One of the issues we have with ICM is they don’t offer the academic freedom offered to professors and instructors in regular classes. Also, ICM has different policies about intellectual property than the university has and that is a big deal for us,” said Morrill.

“My central issue with ICM, however, is that we could have [provided a channel for international students to be brought up to speed] without them. We didn’t need a private corporation to come on campus to do that.”

Scott also mentioned that the department of biology has openly expressed its disapproval of Navitas.

“We called a meeting with our departmental council and we voted nearly unanimously—there was one abstainer—and our department head wrote a letter to the dean saying we will not willingly support or work with Navitas in any way. We, as a department, are adamantly against it and I think most departments are,” Scott said.

The Canadian Union of Public Employees (CUPE) distributed flyers at the rally stating that ICM “doesn’t always inform TAs that they are working for ICM and not the university,” and that “academic staff who work for ICM are not protected by a union.”

UMSU president Bilan Arte also weighed in on ICM during a speech from the steps of the Administration Building.

“Our concern was not only because of the way our university’s reputation was being hurt by these [CBC] reports or because students from this campus felt that they were misled by recruiters. Our primary concern was that these students have no representation and no one to advocate for them or defend them against unfair treatment by their institution,” Arte said to the crowd of hundreds.

Arte also spoke about the selling of essential campus services, such as food and janitorial facilities, to Aramark.

“When essential campus services [ . . . ] are sold off to huge multinational corporations like Aramark, when we treat our campus services like businesses, students become the university’s customers. Not major stakeholders. Not the livelihood of the institution.”

Arte went on to criticize the university administration’s unwillingness to consider students’ interests when it comes to developing the recently purchased Southwood Golf Course.

“The recent purchase of the Southwood Golf Course [ . . . ] gives the U of M a real opportunity to directly expand available housing that meets students’ needs. However, with planning and development now underway, the administration has resisted both making student housing a priority for the project and giving students a voice on what those housing developments will look like,” she said.

Members of the Canadian Auto Workers (CAW) union, which represents caretakers on campus, took to the podium following Arte to voice their concerns.

Many stories of conflicts between caretakers and Aramark were recounted, including multiple cases of managers yelling at workers, and an incident in which an employee undergoing chemotherapy was asked to provide a doctor’s note in order to be allowed to wear a headscarf during work.

Six days after the rally, an email invitation was sent to members of the university community announcing a town hall style meeting to be hosted by U of M president David Barnard on Friday, Mar. 1 at 10 a.m. in the Manitoba Room, University Centre. The event is open to the public.

“The entire university community has an opportunity to express their views and concerns, and work out ways to move forward, and make sure that the university remains the attractive institution that it is,” said an administration representative to CBC.