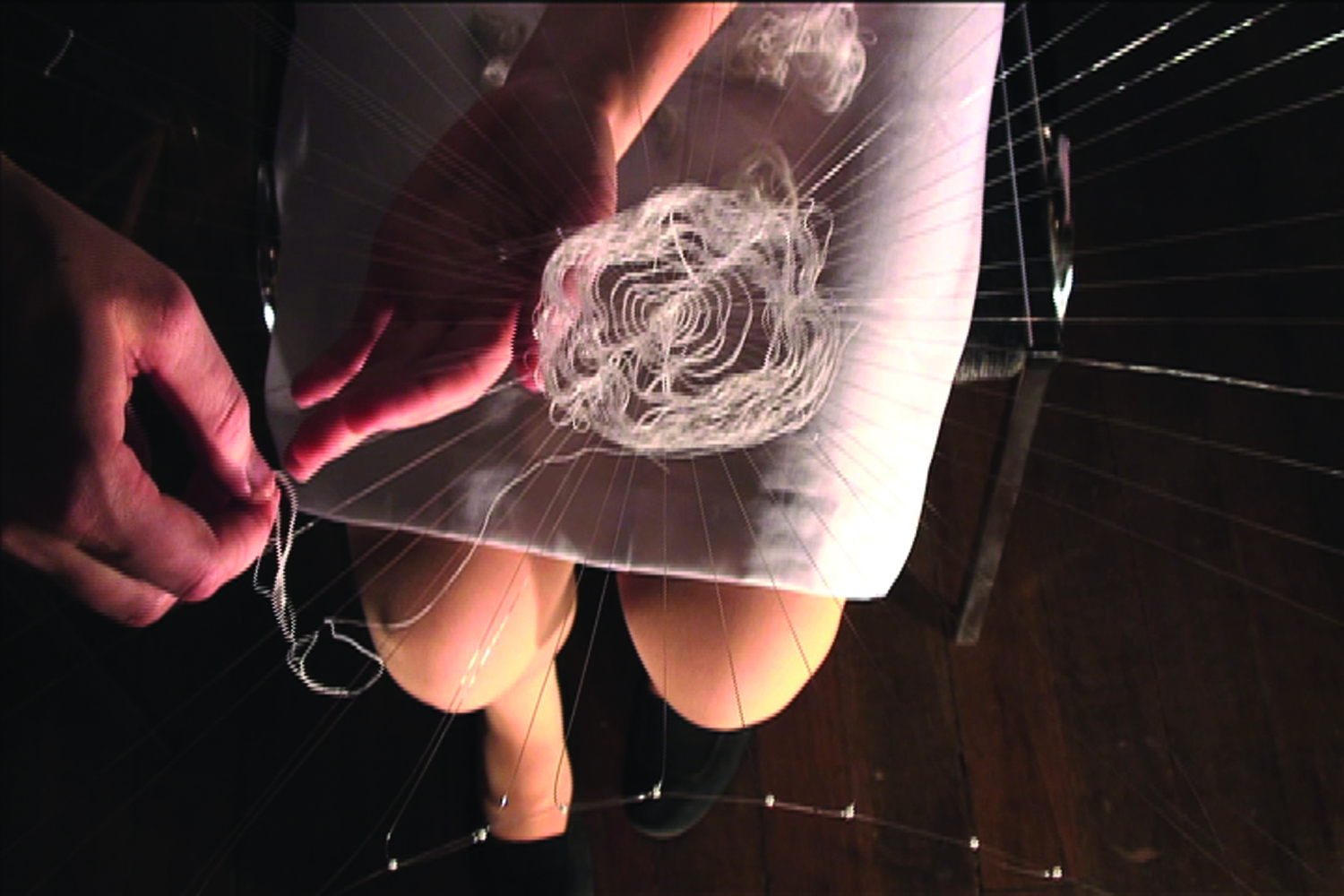 Homemaking by Chantel Mierau, opening at aceartinc. on Friday, Mar. 1, uses traditional textile methods with a contemporary twist. Six videos, one installation, and a performance all involving handmade textile works make a commentary on comforts, discomforts, traditions, chores, and the artist’s personal history and reflections on being Mennonite.

Mierau, a graduate from the University of Manitoba’s school of fine art, is known for her work done with knitting and sewing. She has thoroughly exhibited her work across Winnipeg, and has received awards from the Manitoba Arts Council and Video Pool. Mierau pushes the boundaries of traditional processes by bringing in contemporary elements such as video, performance, and installation.

In her thesis year, Mierau took knitting to a new level. Her piece, “Humility, Fear and Trembling,” used sewing thread for yarn and sewing pins for needles. She completed close to 20 tiny red scarves and the piece included a video of her working.

“Because of their scale, and their DNA-like structure, this work brings to my mind thoughts about heritage and lineage, as well as traditions, practices and even belief systems that inescapably get passed down from generation to generation,” Mierau told the Manitoba Crafts Museum and Library.

“I learned to knit when I was 18, and then started using it for non-functional pieces two years later upon entering art school. I find that knitting embodies much of the subject matter I want to address in my art such as care, tradition, work and home.”

Mierau’s new films include footage of people in the process of making textile work, but others also show her completed—and otherwise non-functional—pieces being put to use.

In the film Larva, the artist is shown outside, wrapped up in what can be best described as a giant slipper sewn shut across her back. Mierau crouches inside of her knitting, with her hands close to her face, resembling a slug. As the larva, she picks up a ball of yarn and strings it across the doorway of an abandoned barn, making a clothesline, and then pins a tea towel to it. The film is about five minutes long, and the whole time she struggles with the basic task while inside her knitted skin.

“A lot of my work is about comfort and discomfort. The larva costume is this really nice and knitted thing [ . . . ] that you think of as comfortable, but it prevents the wearer from completing a basic, domestic task,” says Mierau.

The film was shot outside of Winnipeg in rural Manitoba, which Mierau says references her personal history.

“I wanted to reference [my upbringing]; it’s about home and tradition. There is something comforting about a traditional lifestyle, but there is also a restricting quality.”

In Mierau’s film, Wednesdaying, several women who are dressed in white, resembling nurses, sit around a quilting frame and work together to weave a large spider web with white thread. The video, about 12 minutes long, plays on a loop, and it’s difficult to distinguish the beginning from the end. Watching the women’s hands pass threads and weave the web gives the viewer a calm, lulling feeling. The repetitive quality represents chores and traditions shared by women in a community setting.

“The women are representations, not characters. I am drawn to anonymity; there is something about being in a group or a community that makes you become a bit anonymous. It is more about the group than the individual.”

“[The film is also a commentary] on the qualities of tradition and the feeling of entrapment in repetition,” says Mierau. “[I called the film Wednesdaying] as a reference to the days of the week, and the idea of having a chore for every day of the week.”

Homemaking is the debut of six new films by Mierau and an installation of the spider webs made during the filming of Wednesdaying. During the opening night reception on Mar. 1, Mierau is planning a new performance, which she has mostly kept under wraps so far.

“I don’t know how much I want to tell you,” Mierau says with a laugh. “When does it go from a teaser to a spoiler?”

Mierau has built a table with mops for legs, which she plans to push around and use to mop the gallery. She will be wearing a masked headdress and what can best be described as “homemaker’s clothes,” as a character that Mierau describes as an archetype of a “good woman.” Upon the table she will write on recipe cards and pass them to people she wants to communicate with.

But what will they say?

“Some advice, some recipes.”

Homemaking will be at aceartinc. from Mar. 1 until Apr. 5. There will be an artist talk with Mierau on Saturday, Mar. 9.

Calling for justice by walking with art

The people behind the paint