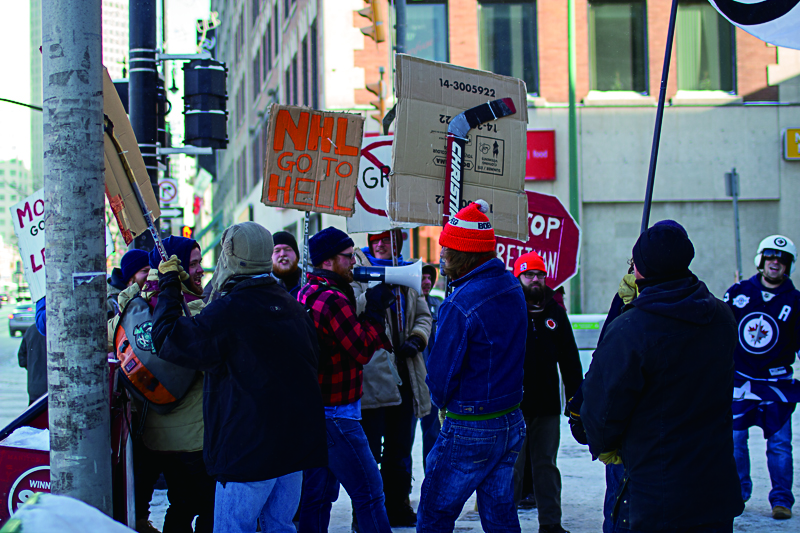 For the second time in as many years, the NHL returned to Winnipeg after a depressingly long absence.

This year’s return was affected by a work stoppage that delayed the start of the season by exactly 100 days. As fans patiently waited for the end of the third lockout in two decades, there were many calling for different types of fan protests or boycotts.

There were calls for fans to remain silent throughout the entire first period, or to “boo and hiss” at both teams when they came onto the ice. A contingent of fans created a Facebook campaign called “Just Drop It,” with the goal being for hockey fans to boycott the equivalent number of NHL game days as were lost between Dec. 21 and the end of the lockout. The results: over 22,000 hockey fans that liked the page have, in theory, agreed to boycott the NHL for the first 10 games of their team’s 2013 schedule.

Before Saturday’s game, a small group of protesters braved the cold outside the main atrium of the MTS Centre with signs that read “STOP BETTMAN” and “NHL GO TO HELL” attached to hockey sticks.

If they were trying to persuade fans to turn around and join the boycott, their protest failed; the downtown arena was, predictably, full to capacity as the Jets fell to the Ottawa Senators 4-1 to open the season.

Around the MTS Centre before the puck drop, there were very few—if any—signs of protest or boycott, and that makes sense for the Winnipeg market. It’s hard for local fans to hate this Jets team, with the city still in the waning hours of the honeymoon since the franchise acquired its new home last season.

It’s equally hard to hate the team’s ownership, a group that includes David Thomson, the most humble billionaire you’ll ever meet, and Mark Chipman, a local businessman who was a part of the effort to save the original Jets team and who put the pieces in place for the NHL’s triumphant return in 2011.

Still, the protest outside the MTS Centre does go to show that the relationship between the league and its fans has been damaged – even in places where hockey thrives like Winnipeg.

Michael Elves, program director for 101.5 UMFM, is one of those hockey fans fed up with Gary Bettman and the NHL. Elves is a knowledgeable hockey fan who would participate in multiple fantasy hockey pools in previous years. This year, however, he’s taking a stand

“[The lockout] has crystallized my perspective on how much I dislike Gary Bettman,” said Elves, who intends to ignore the NHL entirely this year.

Part of the reason why he’s through with the NHL is the way that the end of the lockout has been touted as the “return of hockey.”

“The NHL is returning; hockey never left, and that’s the thing,” said Elves. “There was the World Juniors, there’s the WHL, there’s the AHL, there’s the MMJHL. There’s lots of hockey, and hockey’s not gone or ever at risk of going in this country.”

“Hockey never went away, just the NHL. I’m not out on hockey, I’m out on the NHL.”