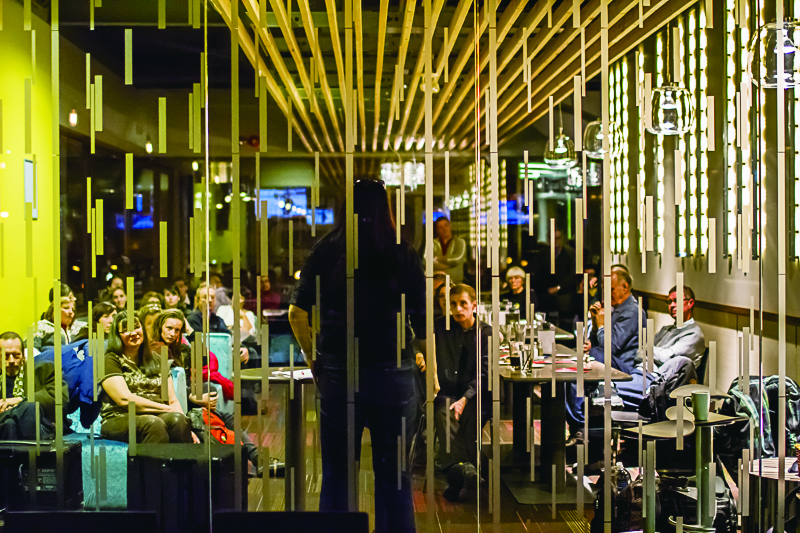 Idle No More speakers and supporters gathered Thursday, Jan. 17 at The Hub on campus to discuss the movement and what it really means. The event was sponsored by the Liberal Party.

Activist and speaker for the rights of First Nations peoples Tina Keeper was the host of the evening. A former member of the Canadian House of Commons, Keeper opened the evening by highlighting the importance of this movement for Canadians.

Keeper stressed the importance of intellectual conversations for Canadians in coming together to ask, “How do we live together?” and “How do we work together?” She says criticism of the Idle No More movement is welcomed because it leads to improvements, which have already occurred and are already underway.

Chadwick Cowie, co-chair of the Aboriginal Peoples’ Commission, introduced a brief summary about the various proposed government bills, including those that have recently passed and which will affect First Nations peoples.

The movement began last November after controversy arose surrounding the passing of the omnibus Bill C-45. Critics claimed the bill makes it easier for First Nations lands to be surrendered, with no protection, through leases which are legally binding. They also claim it doesn’t just affect First Nations peoples, but Canadians as a whole since it removes environmental protection, meaning that the government is able to approve resource projects without consultation of its citizens.

“Canadians trust government to operate within a spectrum of behaviour, which our government is not doing,” said Cowie.

He stressed that every Canadian is entitled to equity, safe communities, education, and safe drinking water, but that this is not the case for First Nations peoples.

In an interview with CNN on the morning of Thursday, Jan. 17, former Prime Minister Paul Martin declared his support for the Idle No More approach. Martin said that awareness of First Nations issues is important, as most Canadians have no clue about the reality and severity of the situation.

“Idle No More, while not unique—there have been other historic examples of it—is nonetheless a very different approach. It’s not violent. This is a huge grassroots movement in which a lot of non-aboriginals are participating,” said Martin.

Cowie argued that treaties allow for friendship. The more Canadians stand together, the more that can be achieved. He also stressed the need for all Canadians to get involved since united people create greater change.

“We need Canadians to say, you’re right and we’re going to stand with you,” said Cowie.

Another important speaker at the event was Michael Champagne, a North End activist, who has been involved with Idle No More since the beginning of December.

Throughout his upbringing, Champagne witnessed a significant amount of apathy in social situations involving First Nations peoples, which, he stated, led to his involvement.

In March, 2010, Champagne began Aboriginal Youth Opportunities (AYO!), an anti-gang support group that provides resources to youth to make their ideas a reality. Champagne spoke at the TEDxManitoba conference in 2012, a prestigious convention of inspiring leaders and researchers.

Champagne stressed the importance of education, listening, and communicating with one another. He laid out six central themes of the movement: federal legislation and agreements, history of Europeans and Indigenous peoples, Indigenous governance, effective advocacy, quick organization, and roots.

“We need to support our women. We need them to know they are valuable, beautiful, and can help change things. They are not an inconvenience,” Champagne asserted.

Rachel Green, a First Nations single mother of three, gave a heartbreaking story of resilience. In October, she was in her fourth year of Indigenous studies when one of her sons was diagnosed with cancer. Green said that because she did not quit her education to take care of her three children, especially her terminally ill child, she was threatened her by Child and Family Services (CFS). She refused and it led her to push for policy change with CFS. Green stressed the importance of education and positive role models to resist negative aspects of life.

She reiterated a question from one of her deceased professors who asked, “What are you going to do for your children?”