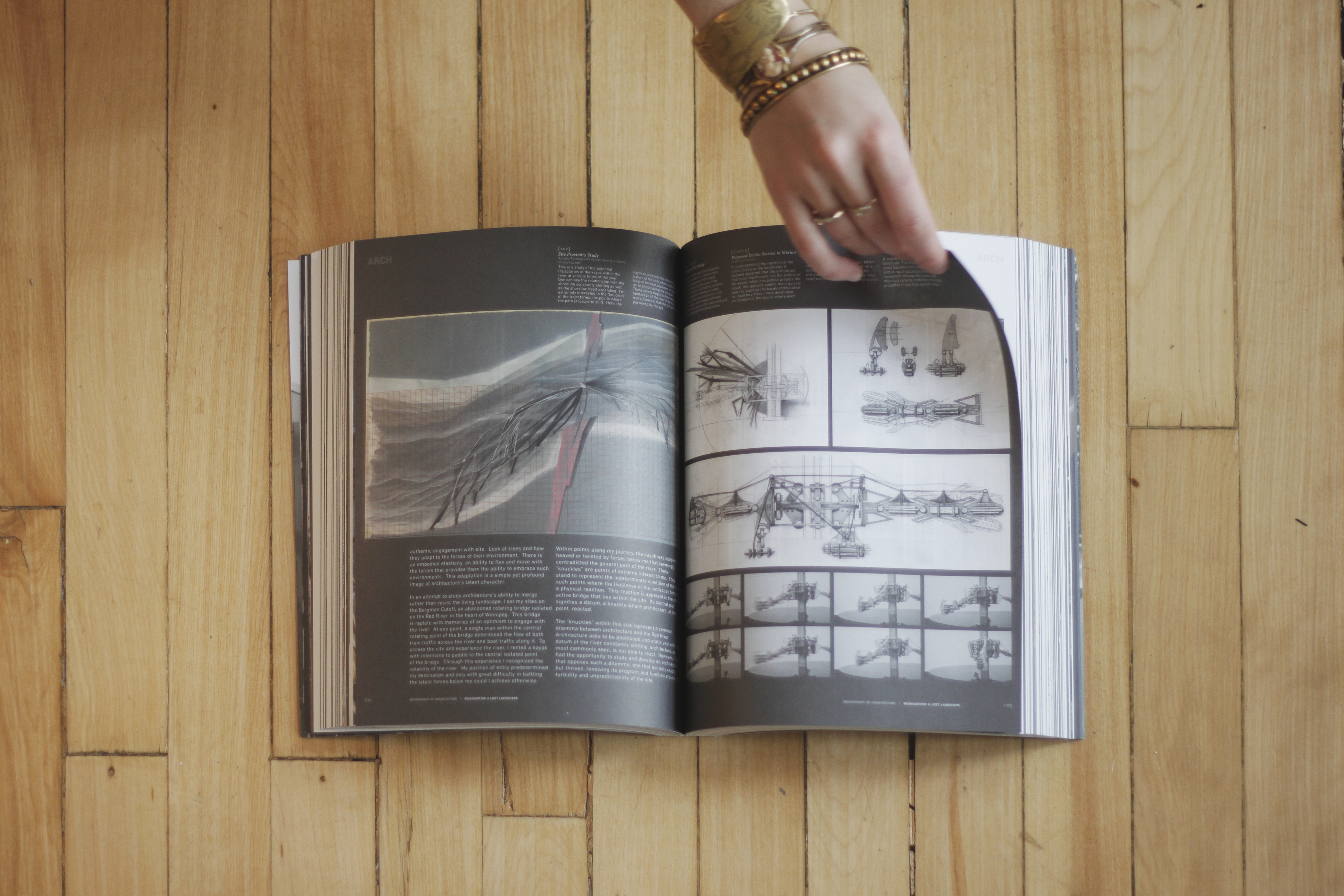 Warehouse Journal publishes the works that best represent the University of Manitoba’s faculty of architecture over the course of the previous year. This year’s journal will be the 21st edition and is on display at MAKE / Coffee + Stuff in an exhibition setting entitled 003_READ.

This edition’s editors, Brandon Bergem and Nicole Hunt, are the first graduates of the program to curate the journal – usually it is curated by current students. The two editors say they spent many late nights at MAKE / Coffee + Stuff, where recent editions are on sale and all of the issues are being displayed, often grabbing a cozy patch of concrete floor to sleep on.

“I couldn’t imagine being a student and doing this – we worked from eight in the morning to four a.m. during the last week of production,” says Bergem.

It wasn’t a chore for the two to be spending upwards of 20 hours a day together; the two former Albertans met in their first semester of university and have been inseparable ever since.

“We edited together, we work together, and we’re even friends outside of work – if you can believe it,” laughs Hunt.

The pair had over 500 submissions from students and whittling that down was a difficult task, but necessary to best put together a collection that represents the achievements of the faculty.

“The book is 480 pages – giving each of those submitted projects a single page wouldn’t give you a good idea of what that project was. Doing 500 pages of student content doesn’t make it a journal, it makes it a catalogue or yearbook,” says Bergem.

Aside from student work, the journal features additional content from guest lecturers and professors’ research and practice.

“We really wanted to represent the culture of architecture and the diversity in the faculty and in the practice.”

Although they didn’t always agree on which projects they wanted to include, they agreed that they are first and foremost appreciative and excited about the student content. Being able to feature work and winning projects from the 2012 Venice Bienalle—often referred to as the Architecture Olympics—was a highlight of putting the 21st edition of Warehouse Journal together. Team Canada was Winnipeg-based and featured the work of many students and alumni, bringing attention to Winnipeg and the faculty. The project titled Migrating Landscapes used a wooden landscape filled with model dwellings by participants to explore the themes of migration, immigration, and moving from one culture to another and the effect it has on the sense of one’s space, place, and way and mode of living.

“It felt like such a local thing, but it was national and international, which was so exciting for the students involved,” says Hunt.

The exhibit brings all of the journals together in a cohesive way for the first time and brings them out of their usual archive, making them accessible to students and the public alike. The chronologically-displayed books allow for not only nostalgia, but for an opportunity to see the evolution of Warehouse, the faculty, and students who are now practicing design. The venue choice allows for a more interactive and accessible relationship to the exhibit, which is the goal of MAKE, a coffee shop actually functioning as a front for the design firm S.T.U.F.F. or Stuff for Transformative Urban Forms and Fields.

“It’s not like a gallery where it’s like ‘Don’t touch the $10,000 painting!’ You can reach out and pick up a copy and the current editions are actually displayed as coffee table books, so you can flip through one while having a coffee,” Bergem states.

The firm was founded by Jae-Sung Chon, whose goal was to encourage discussion amongst people who would never otherwise set foot in an architecture practice.

“Everyone has an opinion about architecture and design – look at things like the Cube or the Human Rights Museum. You don’t have to be an architect to have an opinion,” states Bergem.

Hunt adds that being able to constantly interact with people about the book who often have no idea she is one of the editors is one of the best parts.

“It’s great to hear people’s honest opinions. It’s those opinions and discussions we are learning so much from and that are helping us understand our own book.”

What to do when interviews go negative