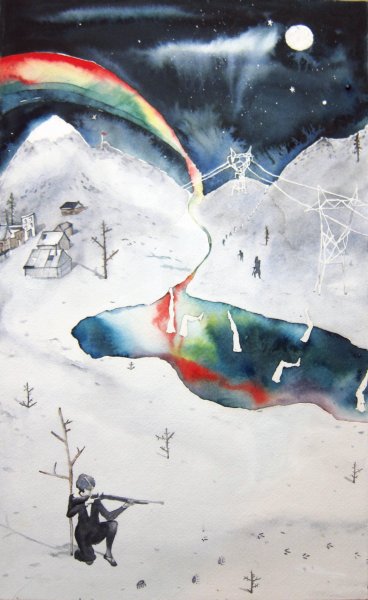 For the next month aceartinc. is home to Rosemary Scanlon’s exhibition Whorl of Sleep, a series of Darger-esque watercolour paintings that locate the tension between the fantasy and reality of northern life.

Scanlon completed her MFA at the Glasgow School of Art in 2010 and her BFA at Concordia University in Montreal (2006). Scanlon has exhibited internationally and currently lives and works in Whitehorse, Yukon. While Scanlon has created installation and photographic works in the past, Whorl of Sleep is comprised entirely of watercolour paintings that have evolved from influences of medieval tapestry and vernacular photography.

The paintings are based off of a composite of images that Scanlon collects, whether it is from online or a photograph she takes of her surroundings. Scanlon is interested in how medieval tapestries overlay images, ignore ground and perspective, fill all space, and build a narrative of daily life.

“When I first started coming up to the Yukon, life up here was so surreal. It was so magical and strange – the atmosphere, the crisp quietness of when it gets really cold and really dark, the lynx slinking across the road ahead of you, wild adventures in pickup trucks, the things that go on under the midnight sun,” Scanlon told the San Francisco Chronicle. “My experiences here had a huge influence on my artwork and me. I like to attempt to locate that feeling of tension between the fantasy and reality of northern life.”

Scanlon’s painting, “The Looking Glass” features an overlay of the Yukon’s flora and fauna on a dark background. A rainbow climbs out of some dead trees and a bear is perched on top of it. Various animals and flowers are scattered about as well as a mushroom ring and a pick-up truck covered in Christmas lights.

“All the animals are painted [from taxidermy],” said Scanlon. “I was interested in different representations of nature and how we preserve it. You slowly go through it and find the different animals and start making your own stories.”

The painting “Bang Bang” depicts a snowscape atop of an icy-looking black sky housing a full moon. The city of Dawson, Yukon is at the base of some snowy mountains and a rainbow pours down from the sky, trickles a river through the mountains and creates a lake in the middle of a snow-covered plain. White legs kick out of the rainbow water and a woman crouches with a rifle in the foreground.

“While I was [doing a residency in Dawson] they were digging up the ground for a new sewage plant and they had come across some bodies [ . . . ] and they found that they came from the turn of the century [during the gold rush],” said Scanlon. “There were all these stories flying around about who they were [ . . . ] I was thinking about how things float up over time.”

Whorl of Sleep is a free exhibition and will be on display at aceartinc. until Dec. 7.