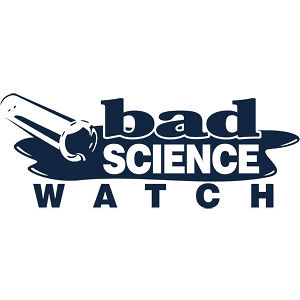 I care about science. I am fascinated by its attempt to systematically weigh evidence and weed out bias, ever striving to reach successively closer approximations of the truth. I also care about bad science, and I’m fascinated by the demarcation process distinguishing the good from the bad. This is why I jumped at the chance to volunteer for Bad Science Watch.

Bad Science Watch is a recently formed Canadian non-profit activist organization dedicated to ensuring that important societal decisions are informed by good science rather than bad. I recently had the opportunity to speak with Jamie Williams, Executive Director of Bad Science Watch, who took a few minutes out of his busy schedule to discuss the vision of the organisation and the political/social climate that led to its formation.

“[Bad Science Watch is] dedicated to improving the lives of Canadians by campaigning for the enforcement and strengthening of consumer protection regulation against products and services promoted with bad science,” says Williams. “Everyone involved in the formation of Bad Science Watch is concerned [about] the harm to Canadians that can be caused by bad science and poor consumer protection.”

Williams is distressed by what he sees as problems with Canada’s health regulations, citing recent cases of infants dying of pertussis, a vaccine-preventable illness, as a disturbing example.

“Irresponsible companies and health providers are being allowed to spread misinformation and sell ineffective ‘alternatives’ to vaccines based on bad science. I and the other founding members saw a void in Canadian consumer protection and science advocacy regarding these issues. We saw a need for an independent organization with no industry ties or other conflicts of interest to campaign for all Canadians.”

When asked how a non-scientist can distinguish good science from bad, Williams admits it can be a difficult process, and one that’s exacerbated by the way science is represented in advertising and the media.

“By bad science we are referring both to the misrepresentation and/or distortion of valid scientific information, and to claims that are made [either] using scientific jargon or presented as being scientific but in reality lack support and plausibility.”

Williams describes good science as “a consensus of experts justified by a weight of evidence accumulated over time using the best practices of the scientific method.”

Williams also provided examples of certain “red flags” that consumers should watch out for.

“Consumers should be wary of products or services that are promoted with testimonials, claims of 100 per cent effectiveness with no downsides, or claims that they work simply because they have been used for hundreds of years [ . . . ] Very rarely is information from sources with a commercial stake likely to be entirely unbiased, and if it sounds too good to be true, it probably [is].”

If you’re trying to figure out what the greater scientific community has to say on the subject, Williams recommends relying on international scientific organisations (such as the World Health Organization) and associations representing working scientists.

Turning the conversation toward the goals of the organisation, I asked Williams what he hoped Bad Science Watch could accomplish in the next few years.

“One of our major goals in the long term is the reform of the Natural Health Products Directorate of Health Canada, making it better positioned to benefit all Canadians rather than the interests of pharmaceutical companies and other manufacturers,” Williams said. “We are disappointed that the Directorate’s responsibility to Canadians to ensure safety, efficacy, and quality of products is undermined by various forms of exemptions and ‘free passes’ for certain product types. This is of no benefit to the health of Canadians, and in some cases we see it as directly undermining Health Canada’s public health efforts.”

Bad Science Watch’s concerns, however, are not limited to the Natural Health Products Directorate. When I brought up Gary Goodyear, who has served as Minister of State (Science and Technology) since 2008, Williams assured me that the fact this position exists doesn’t mean that the government policies are based in sound science. He also expressed concern that Goodyear doesn’t accept modern evolutionary theory, which Williams notes is “the underpinning of all modern biological science.”

Williams was quick to dismiss the idea that Bad Science Watch was simply another special interest group.

“I don’t think you could consider our interests ‘special.’ We don’t represent industrial or professional interests, and we’re not promoting an ideology or political agenda; we’re concerned with the health and wellbeing of all Canadians.”