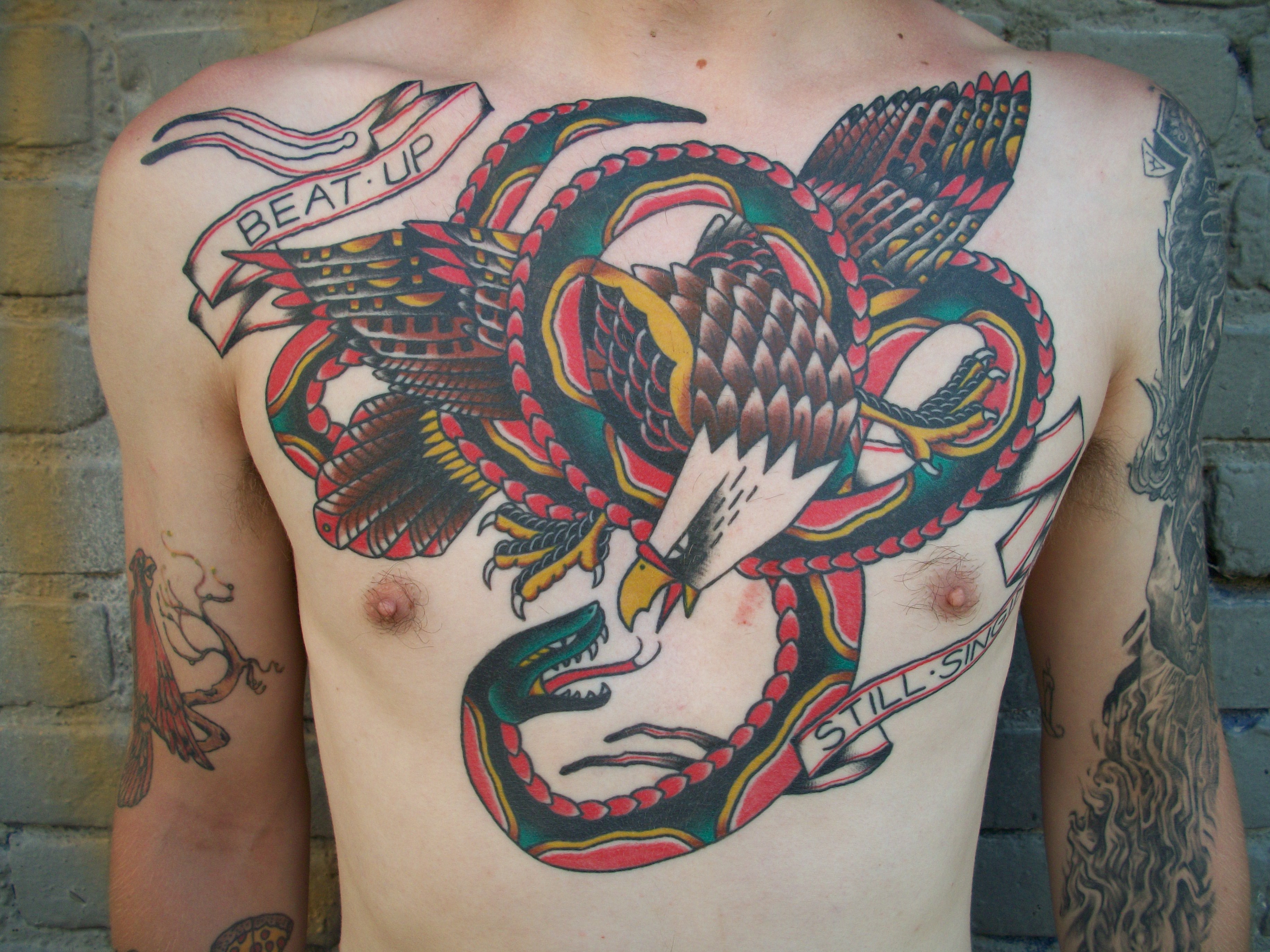 Rebel Waltz Tattoo, located in the heart of the inner city on Notre Dame Avenue, is one of Winnipeg’s most versatile tattoo shops, providing modern electric tattoos to willing patrons since 2009.

Each resident artist specializes—but is not limited to—a different style of work; whether it be Bram Adey (with his stick-and-poke style tattoos) or Chris Stans (who excels at more modern designs) one thing is for certain – if you’re looking to get a traditional tattoo in Winnipeg, Don Ritson is the guy to talk to.

Ritson, the owner/manager of Rebel Waltz, is not only one of the most talented tattooers in the city, but is also one of the nicest guys you’ll ever meet. Sporting facial hair that resembles a giant beard of bees from afar, Ritson specializes in a style of tattooing that can be best described as a modern take on American traditional. Taking the signature traits of traditional tattoos such as thick, clean lines and bold, solid colours, Ritson adds his own flare to this historical style through beautiful shading and the adding of subtle three-dimensional features.

Ritson tends to work most often with the two original colours of pigment used for tattooing: black and red. Not only is the bulk of his flash art designed in this colour scheme, but all of the tattoos in his own personal collection are black and red as well. Ritson says he’s certainly not limited to these colours in any way, though.

“They’ve always been colours I gravitate towards; long before I began tattooing even,” says Ritson. “To be honest, a lot of the flash I do is primarily black and red, and people just seem to be into it. It’s super heavy and “tuff” looking, but it’s also got that little splash of colour. All the tattoos that I have personally are black and red as well, so it’s easy to show people how it’ll look once we get it under the skin.”

“For the record though, while I love doing it, it’s not all I do. If I think I can do a good job of the piece, I’ll take it on – I’m not one of these highfalutin tattoo artistes or nothing.”

Recently, the shop moved from its former location (also on Notre Dame Ave.) to a new building across the street after Ritson decided to buy a new home for Rebel Waltz.

“We were in the old location for long enough,” states Ritson. “It was tight and cramped, poor storage, super hot in the summer and cold in the winter, and we had to deal regularly with the other tenants. I’ll remember it fondly, but it’s rad to have room for all our stuff, all our reference, and that sort of thing.”

Not only do all of the resident artists provide quality tattoos, but Rebel Waltz has frequent visits from out-of-town guest artists as well.

“Earlier in the summer we had Franz Stefanik come out, which was a lot of fun,” says Ritson. “We’ve worked on a few of the same clients, so it was cool to finally meet and work together. Hopefully he’ll be back again – there were a lot of people who wanted to get in and couldn’t just because he ran out of time. A few weeks ago we also had my good buddy ‘Handsome’ Mike Bialek from Toronto come out. I’ve been out there a few times to work, so it was great to get to show him around Winnipeg a bit, and return the hosting favour.”

If you’re in the market for a new tattoo Don Ritson has one thing to say to you – “Come check out the shop and get tattooed!”

For more information on the shop, resident artists, and future visits from guest artists follow Rebel Waltz Tattoo on Facebook, or check out their website at www.rebelwaltztattoo.com.

Don’t hit snooze on these sleepers