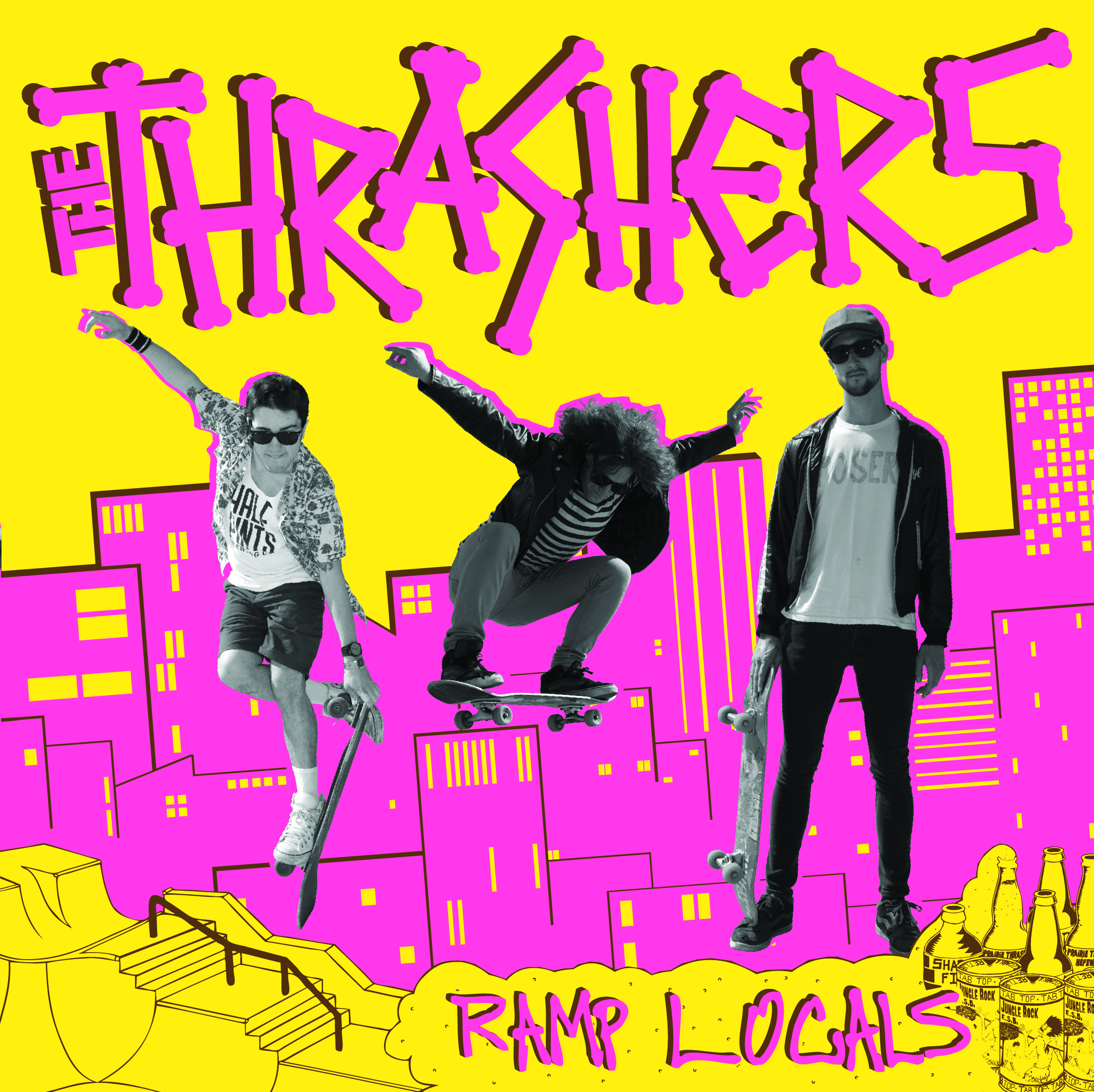 The Thrashers “dropped-in” to the Winnipeg music scene in 2007, unleashing their signature 80s influenced brand of prairie-surf-punk on the world with the release of their debut EP Man Re-Enters Sea. Their high-intensity live show boasts crisp guitar licks dripping with reverb, and frantic vocal lines that are sure to get your hips shaking.

Now, with a full length LP and a few Canadian tours under their belt, the Thrashers are poised to release their third album, a three-song, skateboarding-themed 7-inch record. With songs such as “We Hate This,” an anthem for anyone who dislikes un-skate-able objects, and the title track “Ramp Locals,” which talks about decapitating lurkers and hating cops, this tasty vinyl snack is sure to satisfy your rock and roll hunger. I had the chance to chat with the Thrashers about their upcoming record release, and here’s what was shred, er, said.

Your last album, Make A Splash, was reviewed by Beatroute AB, and deemed “rock and roll built for reckless fun – like stealing your shitty uncle’s shitty beater of a car, drinking a shitty case of shitty beer with your shitty friends, hoping to god you can find some shitty fun in this shitty town of yours because you’re only young for so long and soon life is going to turn real shitty.” Is this an accurate description of your music?

I think that [the] reaction to the songs on Make a Splash comes from the same place we were when we wrote a few of them – [being frustrated]. When you feel like that you can do a couple different things: give up and decide everything is shit and it’s gonna stay that way, or you can decide “fuck this,” and make your own action. We chose the latter.

M: Ramp Locals comes out this week – how does this 7-inch measure up compared to your last two releases?

IL: We wrote the title track way back, and when it came to planning our next release we thought it would be cool to write a couple more songs to go along with it, and do a skateboard themed EP. We’re all really happy with how it turned out – even with all three tracks focused on the same [thing], we still manage to cover a lot of ground

M: This is your second release on Transistor 66 Records – how has being signed to Winnipeg’s premier authority for all things rock and roll benefited or advanced your career as a band?

IL: I feel like [Transistor]’s taste in music is much revered in the rock and roll community. It’s like a seal of approval to put that logo on our releases. If Transistor put it out, it’s probably worthwhile. Most of the bands we enjoy going out to see were either on Transistor when we signed or have since joined the group.

M: The artwork for your last release featured photos of the band at a rock and roll concession stand, sporting short-shorts, and eating foot-long hotdogs. Are we in for any treats with this album’s packaging?

IL: There’s less nudity on this release. You can’t give it all away up front – we have, however, gone all out with the packaging. We love putting everything we have into our product so that those who buy it really get their money’s worth. Yellow vinyl in a yellow and pink jacket! We took heavy inspiration from Toy Machine Skateboard ads in how we laid it all out.

M: The band recently played a set at the University of Manitoba during orientation week festivities. How was that experience?

We had a lot of fun with that. It’s always a little out of place for us to be playing while the sun is still up, but on the plus side of that I could actually see the people who we were playing [music for]. A LOT of cute girls go to the U of M. Really makes me wish I had paid more attention in school, or at least hung out at the university before now . . .

The Thrashers are releasing their 7-inch record Ramp Locals on Sept. 21 at the Cavern.

Kith and kin: An interview with the Bros. Landreth