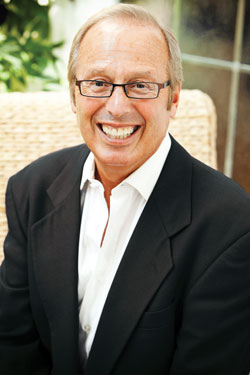 The posters were discovered on Sept. 14 in various locations around downtown, including Carlton and Broadway. Soon after the discovery the police where notified, which was at approximately 9:30 p.m..

The posters were abruptly removed and the police have not disclosed the particulars of the anti-Semitic remarks made on the posters, except that the posters made references to Hitler.

It has been released however, that the posters also made claims that Katz and other members of the business community of Winnipeg have been engaging in questionable business practices.

In a statement, Sam Katz said he was extremely saddened and disgusted at this display of anti-Semitism, but believes that the people of Winnipeg do not harbor these kinds of feelings.

“I am extremely saddened and disheartened that an individual, or group of individuals, is posting such material. I have faith that the people of Winnipeg will not support such malice,” said Katz.

Katz also asked that the people responsible for the posters come forward and own up to their actions.

“I only hope that those who are, you know, responsible for fanning the flames of racism and anti-Semitism have the courage to basically stand up and admit to it,” he said.

The posters went up just days before the Jewish New Year Rosh Hashanah. The holiday began just two days after the posters were discovered.

In a statement made Sunday, Sept. 16 Bob Freedman, the CEO of the Jewish Federation of Winnipeg said the posters are worrisome.

“It is upsetting, you bet, especially for those people who were named. Why were they named? [ . . . ] We’ve received a number of emails from prominent folks being supportive, many of whom are getting ready for the start of Rosh Hashanah,” said Freedman.

The police are currently investigating the matter and have asked that anyone who has any information regarding the perpetrators to contact the Winnipeg police. The messages on the posters are seen by many as hate speech and are thus being taken very seriously.

According to Patrol Sgt. Wally Antoniuk, the police major crime unit has a small section whose main focus is hate crimes, and are currently conducting an investigation.

The police have also reported that there were no identifying marks made on the posters, but they are looking into an author by the name of “Follow da Money” who was found posting contents from the posters on topix.com website.

The news of these posters also reached the Public Safety Minister Vic Toews who said that he was shocked to hear about the posters.

Canadians have “no tolerance for anti-Semitism of any kind and today I continue to stand with the Jewish community in Winnipeg,” said Toews in a press release shortly after the incident.

Various Jewish organizations of Winnipeg and Canada are saddened and outraged at the appearance of these posters.

According to David Matas, who is a B’nai Brith representative from Winnipeg, the posters in his view constitute a hate crime.

“It’s testimonial to the permanence of anti-Semitism. It seems never to stop. It’s the oldest and the strongest hatred, and it’s kind of discouraging to see it here,” said Matas in a CBC interview.

Are you offended yet

The false equivalency of political violence