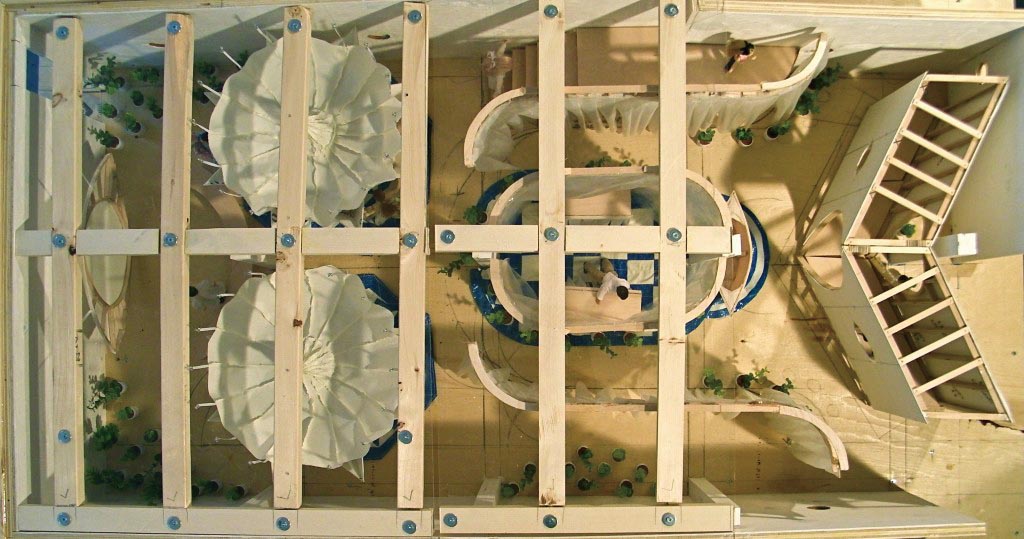 I visited Seth Woodyard the day before his opening reception at aceartinc. The gallery space was completely transformed; new walls were built, there were plastic tarps hanging from the high ceilings, a small wooden boat filled with crystal clear water, and two very peculiar looking gazebos. Scaffolding was still up and a handful of people were helping to smooth plaster and install video equipment.

“It’s going to be right down to the wire,” Woodyard said with a smile. He appeared confident, for him, the process is more important than what he ends up with at the end.

Born in Prince Edward Island and raised in Ottawa, Woodyard moved to Winnipeg in 2003 to study history at Canadian Mennonite University. After one year at CMU he made the decision to enroll in the school of fine art at the University of Manitoba. His exhibition, entitled Good Work, is his first solo show since graduating in 2009.

“I didn’t want to finish my degree after the first year,” says Woodyard. “In Ottawa they had this amazing arts high school, so I had already studied art in a concentrated way for four years. After graduating I decided I wanted to do a history degree rather than art. When I started I didn’t leave any room in my life for making art. It made me realize that I needed art in order to be happy.”

In the beginning, Woodyard was primarily a painter but his work evolved into installation and sculpture.

“For me, installation is like building forts, I approach it in the same way as I did building forts as a kid with sort of a playful intention. My first major installation was at the U of M, I dug a cave in the side of the river bank, it was very much about creating a space and inhabiting that space.”

Woodyard’s current work ties together trade and art, and is a return to sincerity and the discipline of ritualized labour. Through symbols, patterns, and repetition he creates a narrative about his personal history, his work, and his worship. He often appropriates images from art history (especially Christian iconography) and the vesica piscis is repeated strongly throughout the exhibition.

“Vesica piscis is latin for fish bladder, it is made when two circles intersect,” he explained. “The circumference of each circle intersects with the center point of the other, when they overlap the vesica piscis is formed. It is the intersection of two binaries, whether it be male and female, heaven and earth, or the sacred and profane.”

Through research, Woodyard found that the symbol had been appropriated by Christianity and was interested in the various meanings and religious connotations attached to it throughout history. Specifically he uses the symbol as a representation of a vagina, as both the object of male desire and as a symbolic way of talking about rebirth through repetition.

“Music is an art form that is easier to have an emotional response to than it is to an inanimate object,” he says. “When it is used in worship it creates an emotional response. It is performed repeatedly, the same songs and the same music over and over, and it gains significance through its repetition.”

“It’s going to be a riot!” laughed Woodyard, when I asked what to expect opening night. Local indie, prog folk band, Alanadale, was commissioned to make the music used in the exhibition and will be performing live opening night along with the Riel Gentlemen’s Choir. The music is all Manitoban themed with songs about plants, bodies of water, and socialism.

If you missed the opening reception, the exhibition of Good Work will run until July 13. Aceartinc is located at 2-290 McDermot Avenue and is open Tuesday thru Saturday from noon until 5 p.m..

Turner’s troupe to bring positivity to the ‘Peg

The threads that bind us