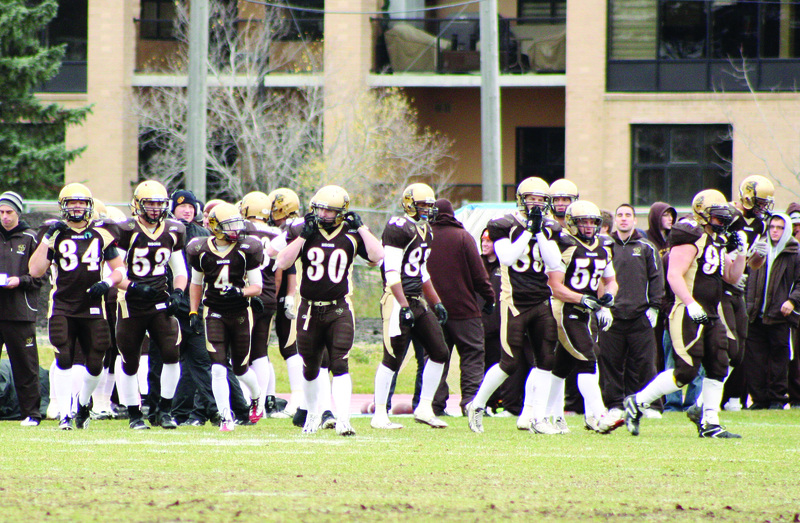 The Winnipeg Blue Bombers announced on May 2 that construction delays might push back the completion of Investors Group Field until late September. This latest development will invariably affect the U of M Bison football Canada West season and may force the team to play their first two home games at University Stadium.

The Bisons are scheduled to play their first home game of the regular season against the University of Saskatchewan Huskies on Sept. 8, just one day before the Blue Bombers take on the Saskatchewan Rough Riders in the Banjo Bowl.

But with the Bombers now saying that the stadium might not be ready until the weekend of Sept. 21, their plans to join in on the Banjo Bowl festivities and the host their own party the following week for the 2012 Homecoming game against the Calgary Dinos might be relegated back to the familiar grass turf of University Stadium.

“I’ve got every finger and toe crossed,” said coach Dobie. “(Opening the stadium Banjo Bowl weekend) would be the perfect situation for the program. I say that selfishly and very gratefully towards the Winnipeg Blue Bombers — to potentially give us that opportunity to be the first ever game in that stadium.”

A former Bison wide receiver will get the opportunity of a lifetime, as Quincy Hurst was selected 28thoverall by the Toronto Argonauts at the CFL Entry Draft on May 3.

The Coquitlam, B.C. native did not play with the Bisons in 2011, but dressed for all eight games in 2010. In his final season in brown and gold, Hurst finished second on the team in reception yards with 295 yards and also pitched in on the punt return team. Hurst cashed in a 100-yard punt return for a touchdown on October 30, 2010 in a game at home against UBC.

Hurst was a sleeper pick heading into the draft, having missed out on the CFL Evaluation camp held back in early March. But a strong performance at the Dwayne Forde National Invitational Combine managed to pique the interest of several scouts in attendance.

“I got texts and phone calls throughout that camp from CFL people, going ‘who the heck is this guy?’” said Coach Dobie.

Hurst becomes the first Bison player drafted into the CFL since Eddie Steele was drafted 22nd overall by the Hamilton Tiger-Cats in 2010.

“It is hard to comprehend that I just got drafted,” said Hurst, “I am overjoyed and have waited over ten years for this moment. I knew there was some interest from Toronto and other teams and was very happy to be selected by the Argonauts.”

“He has great speed and great ability to separate,” says Barker. “We saw him in Duane Forde’s camp and we were very impressed with his ability. We believe he will be a strong contributor to our team one day.”

Bison Football is set to open the 2012 Spring Camp this weekend.

Running May 4-6 on campus at the University of Manitoba Turf Fields adjacent to the soccer complex, the camp will feature over 125 hopeful athletes looking to make an early impression on the coaching staff.

There will be a total of four on-field practices over the three-day camp, before a two hour scrimmage Sunday afternoon.

Lecture reflects on legacy of the Ebola crisis