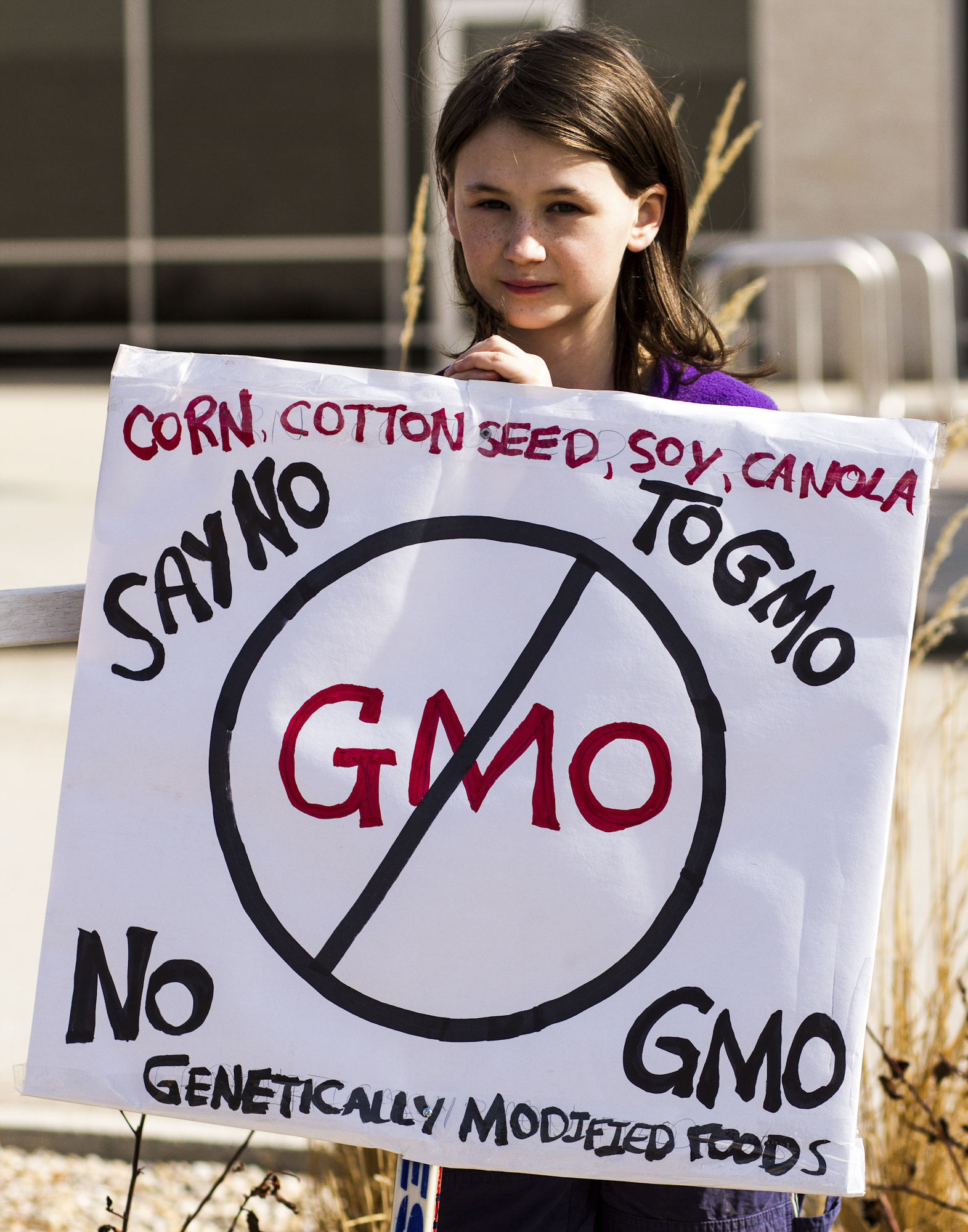 University Centre (UC) was filled with protestors on March 16. They marched through the University of Manitoba campus chanting that Monsanto has got to go.

Monsanto is an agriculture company that sells seeds, biotechnology-developed traits, and crop-protection chemicals.

The protest started outside Monsanto’s offices in the U of M Smartpark at 1 p.m. Roughly 40 people gathered to voice their concerns

They held signs that read “University of Monsanto,” “What if everybody just opened their eyes?” “Monsanto is killing me and the planet,” and 20 people held letters that said “Liberate Monsanitoba!”

Alon Weinberg, one of the leaders of the protest, gave a speech about the issues surrounding companies like Monsanto including: the need for improved safety on technological intervention in society, that six corporations control most of Canada’s food supply, the public has been eating genetically modified foods for years and the bullying and exploitation of small farmers.

“We are not here simply to ask the U of M to disclose publicly the terms on which this international corporate pariah has hoisted itself on its faculty of agriculture and food sciences and the department of agribusiness and economics,” said Weinberg in his speech.

“Though . . . it would be enough to cause students and faculty on this campus to question the very organization of this university and its relationship to private enterprise,” he added.

Weinberg explained the protesters gathered to ask Canadians to overthrow “these rogues,” to support organic farmers and to talk about alternatives to businesses like Monsanto — such as permaculture, small scale mixed agriculture and organic farming.

After Weinberg’s speech the protesters moved inside the Monsanto Canada building, between two sets of glass doors, banged on the glass and shouted, “Hell no GMO” and “Monsanto’s got to go.”

Then the protesters marched down Chancellor Matheson Road straight into UC, where they continued to chant, blow whistles and distribute flyers to U of M students.

The protesters moved from UC through the engineering complex and into the agriculture building where an academic advisor who declined to give his name asked them to leave.

He asked them to respect the fact that classes were going on and, when asked whether he supported Monsanto, replied that he supported student success.

The crowd left and concluded their protest on the steps of the animal science/entomology building to plan future events.

They proposed tabling at both the U of M and University of Winnipeg, and future protests outside Monsanto with solidarity protests downtown.

The University of Manitoba’s security services surveilled most of the protest from a distance.

John Danakas, marketing and communications director for the U of M, explained the university would try to ensure the safety of those on campus if a protest occurred.

Weinberg said he wanted to protest because the people suffering most from Monsanto have no access to the company and he feels it is his responsibility to act when he has access to their corporate headquarters.

Weinberg said this protest was “tenfold” compared to the protest he attended in 2010 when Monsanto opened their breeding centre.

Weinberg explained the main goals of this protest were to let Monsanto know people are watching, to let the university administration know that people are aware of this presence on campus and to encourage people to learn more about the issues and to create a “broad social movement against Monsanto.”

“This [protest] only represents some people who heard of this that were free on a Friday afternoon,” he added.

Louise May, an organic farmer at the protest and a candidate in the 2010 civic election, said she protested because she raises heritage breed animals and grows heritage seed and it is “incredibly” important to make sure these seeds and breeds are around in the future.

“When I see a massive multinational corporation like Monsanto that’s had so many different bad track records . . . not being held accountable and controlling our food supply it makes me crazy,” said May.

Isaac Dyck, who led the march through the university, said it was important on a personal level for him to protest because he needs to let his children and potential grandchildren know that he is opposed to genetic manipulation.

Dyck said they were going to protest again. He said the protesters believe Monsanto is here for a short time only, and that protesters will be part of the voice that says it is time for them to leave.

Elizabeth Worden, an environmental studies student who participated in the protest, said she protested because she believes Monsanto is affecting the environment in a negative way.

Worden also said she was concerned that the long term effects of genetically modified foods are not yet known, and over the hardships farmers are experiencing.

Monsanto’s corporate offices moved to the U of M campus in 2005 and they opened a breeding centre in 2010.

Monsanto Canada was contacted for comment but did not respond before press time.

‘The little race that could’

1 Comment on "Protest marches through U of M campus"