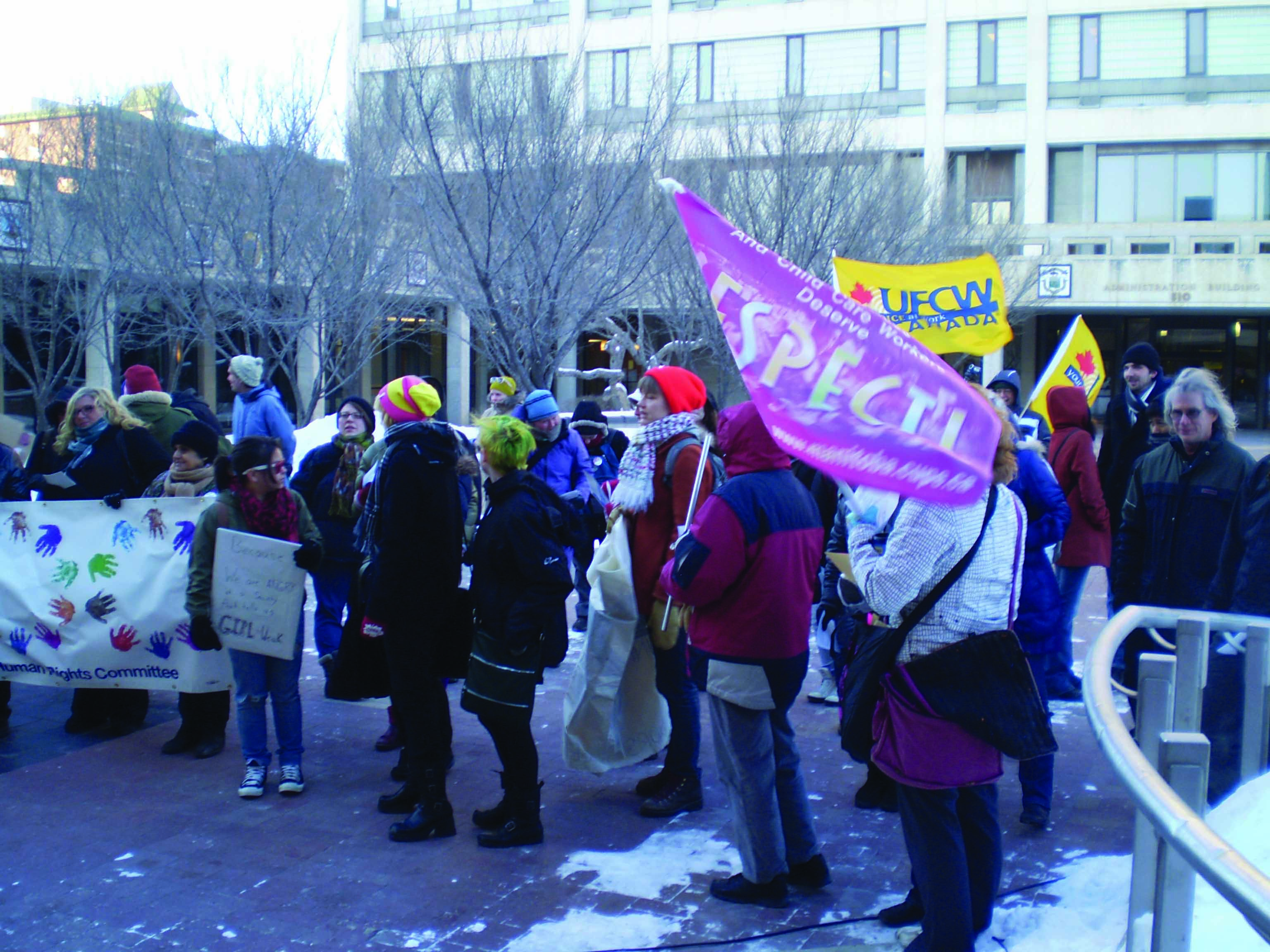 Over 200 women, men and children marched down Main Street despite cold winds in the International Women’s Day March, March 8.

A crowd gathered in the courtyard of city hall at 5:30 p.m. and listened to speeches before marching to the Union Centre on Broadway.

Police cars accompanied the march through the streets as the crowd raised colourful signs that read “Women matter and deserve respect,” “Birth control not control of women,” and “Happy International Women’s Day.”

The crowd also shouted chants as they marched such as: “Hey hey ho ho, patriarchy has got to go” and “2 4 6 8 we’re the ones who ovulate, not the church, not the state, we decide our own fate.”

More speeches took place at the Union Centre where various petitions circulated the crowd from Amnesty International for women’s rights in Zimbabwe and Syria.

Anika Brandt, an organizing committee member and MC for the march, said it was necessary because women have a voice and the right to express that voice and they need to speak for women who have had that right taken away.

This year the event is focusing on the struggles that girls face but also stories of inspiration, Brandt explained.

She said she felt it was important to be part of organizing the march to let women of previous generations, who fought for women’s rights, know her generation is not giving up on the fight they started.

Brandt said the march had a “great” turnout especially considering the weather. “It’s good to see that the feminist movement is still active.”

Brandt said two main issues that still need to be addressed are education, especially in Africa, and violence around the world, particularly in Canada’s young aboriginal population.

She added she hopes the march raises awareness, inspires the younger generation and encourages the people that came to the march to take action.

Chelsea Caldwell, an organizing committee member, said her reaction to the march has been amazing.

“I loved seeing all of the involvement from not only women in the community but also the men of Winnipeg,” she said.

Bilan Arte, women’s representative on UMSU council, said she sees new faces each year, which means the movement is getting stronger and wider.

“I think a march is a really good way to take a public space and talk about issues that aren’t public but affect our society at large,” Arte said.

Arte said she felt it was important to participate in the march because as a woman she experiences life through a gendered perspective and it has made her understand the importance of showing strength in numbers.

Councillor Ross Eadie, who spoke at the rally, said he was inspired by the march and was impressed by the large crowd.

“There [are] so many city issues that have an effect on women so I like the idea that they started at city hall,” Eadie added.

Jennifer Black, coordinator for the U of M Womyn’s centre said she thought the march was “cold, but awesome.”

Black said she thinks International Women’s Day is a chance to celebrate women’s achievements and to look at how women’s situations in Canada can be improved.

Caitlin Cote, a student from Windsor Park High School who spoke at the event, said her reaction to the march was that it was really cold but she liked the energy and enthusiasm.

Resistance to Bill 33 must be a collective struggle

Idle No More supporters gather for national day of action