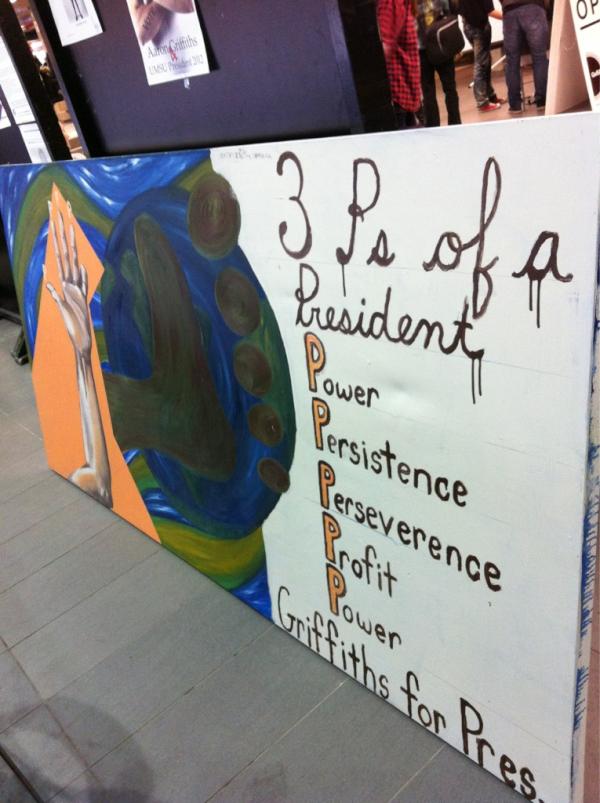 Aaron Griffiths, the independent UMSU presidential candidate, was disqualified from the 2012 general elections, just hours before polling stations closed at the University of Manitoba campus.

The disqualification resulted from a complaint filed by Chief Returning Officer (CRO), Mike Safiniuk, who was advised by the executive director of UMSU, Cathy Dowd, that Griffiths had used a painting belonging to the University of Manitoba Recycling and Environmental Group (UMREG) as a canvas for one of his banners.

According to a report filed by the office of the CRO, Dowd advised Safiniuk that the painting was originally commissioned for UMREG approximately 10 to 12 years ago, and that it was “on a custom canvas frame, and has value.”

The removal of the painting from UMREG “caused significant damage to the painting,” the report states.

An appraisal of the costs to restore the painting performed by Cliff Eyland, an associate professor in the School of Art, determined that the value of the work was between $300-500.

“Restoration costs would far exceed this work’s value,” he said, according to the report.

Safiniuk ruled that Griffiths is responsible for costs related to the damage of the painting, and added the damages to Griffiths’s campaign costs. As a result Griffiths exceed his campaign expense limit of $310 and was disqualified under UMSU election bylaws.

The painting had been located in UMREG offices by one of Griffiths’s volunteers, Scott Leroux, who also works with UMREG.

Leroux said that he was under the impression that the painting was available for use, since it had been “stuffed behind the lockers” after being taken down to make space.

“I was like, ‘we’ve got this big old canvas that’s just been here forever’ . . . It was with the intention of bringing it back, just temporarily using it,” Leroux explained.

However, Anders Annell, manager of UMREG, told the Manitoban that the painting was located in an area of UMREG that was not designated as an area for recycled material to be taken away free of charge, and that it was taken from UMREG without proper authorization.

The banner was originally approved for use as part of Griffiths’s campaign materials. However, Safiniuk said he was unaware of how Griffiths’s volunteers had obtained the canvas for the banner at the time it was approved.

“We review campaign materials to ensure that they are in accordance with the bylaws . . . it’s looking at the content of campaign material, not where it came from, what was it cost, did they obtain it appropriately . . . that is the responsibility of the candidate,” he explained.

Griffiths said he was not aware that the painting was removed from UMREG without proper authorization, or that using it as part of his campaign materials was a violation of the election bylaws.

David Bowles, a volunteer for Griffiths’s campaign, said he felt the decision “proves what a farce these elections are.”

Both Bowles and Griffiths said they were also concerned that the banner was taken down immediately after the complaint was filed and still under investigation, which Griffiths says likely hurt his campaign in the final days of the election.

He added that he was also concerned that the complaint about the banner came forward from UMSU staffers, arguing that this may be a conflict of interest.

Dowd disagreed with Griffiths’s concern, explaining that she was simply trying to ensure that property of UMREG had not been removed from their offices without proper authorization after she recognized the painting in University Centre.

Griffiths filed an appeal to his disqualification with the Elections and Referenda Discipline, Interpretation and Enforcement board. He argued that the appraisal of the painting was “outrageous”, and that damages to the painting should not have been considered a campaign expense.

“Even if the Aaron Griffiths campaign was wrong to recycle the painting, this expense is no different from a parking ticket, which nobody would force a candidate to include in campaign expenses,” he wrote in his appeal.

He also pointed out that the CRO was approximately half an hour late in issuing a written ruling regarding the complaint, which he argued contravened a provision in the bylaws that states the CRO must issue a written response within 24 hours of the complaint being filed.

Safiniuk disputed this claim, stating that he was investigating a violation of the election bylaws that had been brought forward to him by Dowd, not ruling on a complaint, and was thus not subject to this rule.

While the CRO’s office has not released the number of votes Griffiths received, the Manitoban estimates that it would have been between 400-500, based on the reported number of votes placed, and the number received by the two remaining presidential candidates