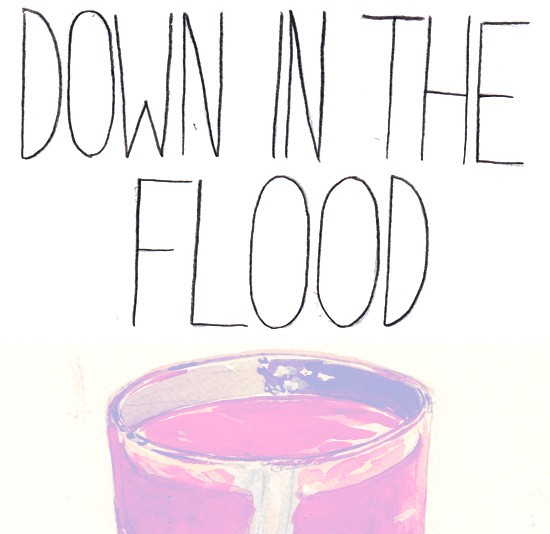 In Canada, certainly in the prairies, we’re no strangers to the plight of enduring uncompromising, sometimes unforgiving, battles with nature. For better or worse the weather turns and we must accommodate the change, both practically and personally.

With Sheldon Birnie’s newly released novel Down in the Flood, this principal takes on new, although not unfamiliar, meaning. Down in the Flood is the story of a man lost in a sea of women, whisky and bad weather; a tale of recklessness set to the backdrop of the Canadian prairies.

Winnipegger’s may recognize Birnie as the frontman of the Canadian rowdy roots rock band Cheering For The Badguy, who released their second album To the Last Drop back in 2010.

Slowly drifting into chaos amidst a season of unprecedented, punishing weather, both the narrator and his best friend Jack must struggle to kick their alcohol addictions during a stint back in their prairie hometown. All the while the two are accompanied by fellow drinkers, buckets of whiskey and a downpour without mercy.

“If we’d been falling apart out west, where the whisky was cheaper the nights longer and the women warmer,” the narrator reads, “then we were bursting at the seams back home. But what did it matter? Seams burst, seasons change, things fall apart.”

True enough, this book is capable of hitting some major chords with its readers and although Birnie has shared common experiences with his fictional counterparts, Down in the Flood is definitively not inspired from life events — it’s more inspired fiction than autobiography.

“The story itself isn’t autobiographical,” says Birnie, “but I definitely drew some of the struggles the character was going through by either my experience or from some friends I’ve known. A lot of stuff that people seem to go through at a certain age when you’re ready to go out with a certain group, get a bit wild and reckless.”

“It’s sort of a process of taking a lot of experiences that may have common elements and creating a story out of them, not necessarily specific instances but kind of a collective experience.”

And it’s that collective experience that can make Down in the Flood, at times, seem so familiar for the reader. Feelings of yearning muddled with resentment for their hometown, these characters are forced to confront their problems dead in the middle of this place they at one time wryly refer to as death. Of course, the weather doesn’t help either.

Short of the emotional journey, readers will also surely identify with the highs and lows these characters go through in terms of, well, their drinking stories. A lot of us have been there before and Birnie manages to take us right back in ways that aren’t heavy handed or hacky. They’re reminders of the headaches but also the excitement a night of boozing can bring.

As far as the book’s official release, Birnie opted to go first with the ebook route making Down in the Flood available first in digital form. Birnie says he was drawn by the appeal of the ebook method, typically an option that leaves much of the control in the hands of the creator.

“I like doing stuff myself almost to the detriment of projects,” says Birnie. “Like with music I’ve always been DIY, it’s always been me calling the shots whether it’s recording, releasing or booking and all that sort of stuff. I’ve often wanted someone to be in a managerial role, but giving them over control of what and when to do stuff, I’ve never been comfortable with that.”

It’s a process of testing the landscape of the digital release platform, according to Birnie, and part of that, an important part of that actually, is determining an ideal price point to make your work available in this new market.

“Even twenty bucks for a nice hardcover book is fine but to pay that for an intangible piece of ones and zeros? It seems too much. I think five bucks is a nice point to say I’m confident I’m not gouging anybody the price of the book, but I’m also getting something for what I put into it.”

Down in the Flood is currently available for purchase ($4.99) through iBooks as well as on the Kindle, Nook and Kobo eReader stores.