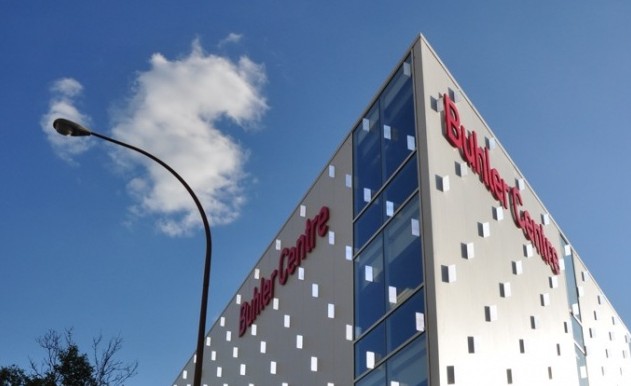 Imagine for a minute that you are an artist. You’re local, from Manitoba and eager to showcase your contemporary work in the belief that it will stretch boundaries, shatter expectations and change the landscape of contemporary art altogether. Museums and formal galleries such as the Winnipeg Art Gallery are seemingly impenetrable to an artist like yourself, one just emerging from the underground world of creative self-exploration and trying to spread your wings. Forty-one years ago, finding a space in which to display your creations, no matter how groundbreaking you believe they are, would have been nearly impossible.

Since 1972, Plug In has provided local artists with a vehicle for creative expression and has fostered an important discourse concerning contemporary art and art practice. From its inception in a small loft at 90 Albert Street, to its clean, modern current location in the Buhler Centre, Plug In ICA has become the prairie’s leading contemporary art gallery and will continue to be a leader in the local contemporary art scene by setting the bar at an unprecedented level.

“It was organized really to be a place where younger artists at the time had an opportunity to meet and show their work and collaborate,” Anthony Kiendl, Director of Plug In ICA said about the origin of the institution.

Kiendl was a 2009 winner of a $15000 national curatorial award, one of two Hnatyshyn Foundation Visual Arts Awards. Kiendl has been Director of Plug In since 2006.

Albert Street in the 1970s was a place and time where anything seemed possible, says Kiendl. Creativity was valued, and the founding artists of the Plug In Institute were “riding a wave” of new ideas including the environmental movement, equality and civil rights, adds Kiendl.

In the minds of artists such as Lorraine Raboud, Suzanne Gillies, Sarah Yates and Robert Mansfield, frustration with the closed off world of formal galleries and the under appreciation of contemporary art as a whole was coming to a head. A small, not-for-profit exhibition space was envisioned; it would be a place where Winnipeg contemporary artists of the same mindset would be able to come together in discussion and camaraderie to display their work for the public. Plug In was born, with Lorraine Raboud and Suzanne Gillies as the founding directors.

“Suzanne [Gillies] described it as a place where if you had just arrived in Winnipeg and you wanted to know where to ‘plug in’ to what was going on, that’s where you would go,” Kiendl said.

The Plug In ICA of 1984 was very different than the Plug In of 1972. Having established itself solidly in the community, Plug In was still committed to shedding light on the undervalued contemporary artists of Winnipeg. Having survived multiple moves (the institute had settled at 175 McDermot Street after bouncing around from two Arthur street locations and a Donald Street setup), and one Fire Department shutdown (in 1977), Plug In was making its mark despite setbacks.

Plug In fostered the creation of Video Pool in 1983, a non-profit, artist-run centre dedicated to independent video and audio production. In 1984, in response to female artists who expressed the opinion that opportunities for women artists were lacking and even Plug In was inaccessible, the institute launched Manitoba Artists for Women’s Art, or MAWA. The initiative was designed to assist female artists in making their career goals possible.

Plug In ICA has never been short of thought-provoking, stimulating and often controversial programming. The first Winnipeg Gay and Lesbian Film and Video Festival was jointly produced by Plug In ICA and the Winnipeg Gay and Lesbian Film Society in 1987, and presented an excellent way to bring several societal issues forward — something that Plug In was beginning to specialize in. The decision to display the works of convicted serial killer John Wayne Gacy was even made at one time, according to Kiendl.

“I don’t think it’s interesting to be controversial for the sake of being controversial but it is an important role in society to bring up these issues in a public forum, one that’s run by and for artists in a non-commercial manner and that there’s an outlet in the community for unbiased conversations about important issues in society.”

“The art Plug In shows has always dealt with contemporary issues and society and inevitably, that will touch on controversial subjects,” says Kiendl.

The ‘90s saw further provocative programming being displayed by the institute in installations such as Festival du Voyeur (put on parallel to the Festival du Voyageur) in 1993, and Moral Imagination in 1996, which highlighted how morals and values are communicated and commented on in society, Kiendl said.

As the new millennium dawned, Plug In made one of its greatest accomplishments to date. Plug In ICA organized Canada’s official representation at the Venice Biennale in 2001 with the Paradise Institute, a multimedia installation that won the prestigious Golden Lion.

“It was a high point for Canada as a country and it was also the first time that an art gallery outside of Ottawa had organized the exhibition and that really set Plug In on an international stage,” says Kiendl, who travelled to Venice himself to co-present the installation. “The Venice Biennale is the oldest and largest contemporary art fair in the world.”

My Winnipeg, a collection of the works of over 70 Manitoban contemporary artists, is wildly popular and was co-presented by Plug In ICA in Paris and in Sete in the south of France in 2011.

“It was great to see Winnipeg highlighted and put on display in Paris, and to have such great critical feedback from the public and from art critics. All the major newspapers came and reviewed the show,” comments Kiendl.

Present day Memorial Boulevard at Colony Street, the Buhler Centre stands, distinctive and unique, shared by the University of Winnipeg and the modern day Plug In Institute for Contemporary Art. A far cry from the loft space Plug In occupied 40 years ago, the new location encompasses wide open space, concrete floors, storefront windows to engage pedestrians and state-of-the-art video technology. Since the move to this prominent new location, public attention for the institute has greatly increased. Pedestrian traffic is heavy here, and proximity to other popular locations like the Bay, the University of Winnipeg and the Winnipeg Art Gallery doesn’t hurt either.

“It’s a much more high-traffic location,” says Kiendl. “We’re kind of at an ideal crossroads; the business community, the university community, the west end neighborhood and the Winnipeg Art Gallery; our audience numbers have gone up about ten-fold.”

Officially opened in 2010, with then-Governor General Michaelle Jean making a speech and unveiling the very first piece to be displayed in the gallery, Plug In was finally home.

The Plug In Institute of Contemporary Art has come a long way from its modest start on Albert Street. Through four decades, all the different locations, and inspiring and controversial programming, Plug In has never been short on artist input, proof that its creation filled a niche that had previously been empty in the Winnipeg art scene. The constantly changing nature of contemporary art is one of the critical characteristics of Plug In’s success and has made Plug In what it is, says Kiendl.

“That change is incredibly important to what we do. It’s always new, always trying to innovate and always trying to change itself and there [will be] younger generations that will come through and do things in a different way and that adds to its vitality.”

Cleanliness really is next to godliness