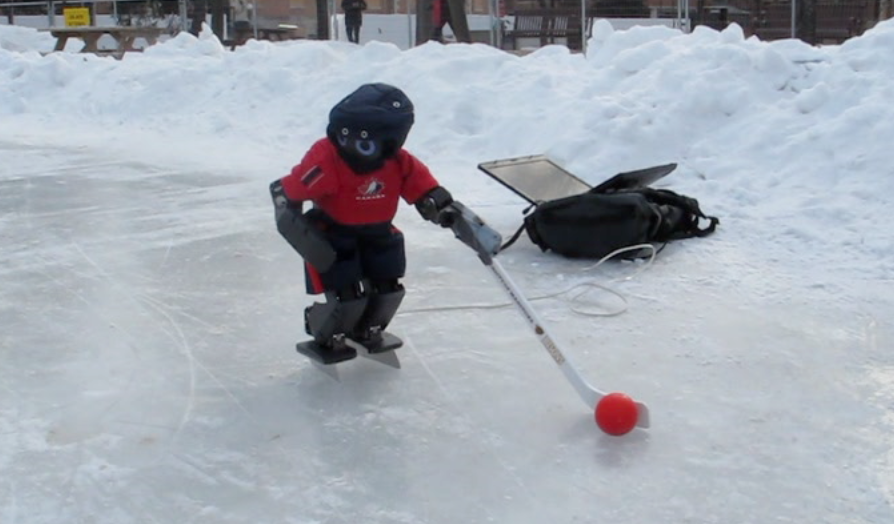 Programmers working at the Autonomous Agents Laboratory may have developed the world’s first humanoid-robot ice-hockey player.

Chris Iverach-Brereton, a computer science graduate student at the U of M, has been programming Jennifer — a DARwin open platform named after Canadian hockey player Jennifer Botterill — for less than a month.

Thus far the robot is capable of taking a shot, stick handling and taking rudimentary strides on some makeshift skates. She makes her moves with a miniature Bison hockey stick.

Jacky Baltes, professor in the department of computer science and Iverach-Brereton’s supervisor, got his student working on programming the multi-sport capable robot to take on Canada’s game mere weeks ago.

Jennifer doesn’t have her own skates yet. Iverach-Brereton told the Manitoban that a customized set of blades was on the way, but had been delayed by a few days.

Jennifer has six motors in each leg and three in each arm. Iverach-Brereton is looking forward to the addition of new motors in the robot’s arms, which will serve to increase range of motion.

Her practice arena is the Duckworth Quadrangle. She, Baltes and Iverach-Brereton have prepared a video entry to the 2012 DARwin-OP Humanoid Appliance Challenge, a competition to reward the most innovative uses of the platform.

“We don’t know anyone else that has tried doing it. There’s other people who’ve worked on aspects of hockey. There’s robots that make slapshots and stuff. I haven’t actually seen a humanoid robot try to do all of it . . . Go Canada!” said Iverach-Brereton.

Look to the Feb. 29th issue of the Manitoban for a more detailed look at sports playing robots at the U of M.