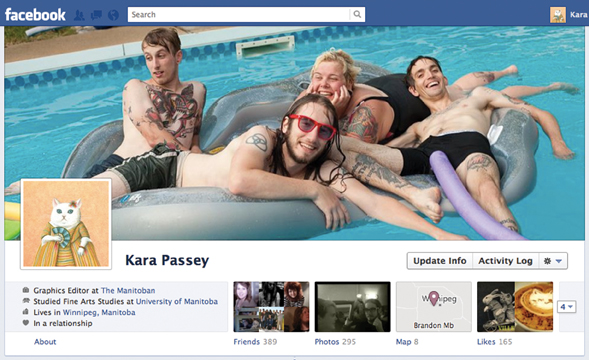 The world of Facebook is currently implementing a substantial change in the form of “Timeline,” a newly designed layout by the company. A Facebook admin’s blog post on Jan. 24th said Timeline (which has been optional up until now) will become standard for all Facebook users “in a few weeks.”

Timeline is designed to emphasize important personal life events, posts and photos that make it to Facebook in order to “tell your life story.” One of the bigger changes in the layout is the appearance of a wide-open space or “cover” occupying the top of the page. Here, users are able to place a photo that best encapsulates who they are as a person and (hopefully) make a strong first impression upon others coming onto your profile page.

While the old design conveniently hid any embarrassing or old photos, the new template makes it much easier for friends to access older photos and posts from your history, dating back as early as the initiation of your account. This is causing many people to criticize the new design, with some users complaining through the bluntly titled “Timeline Sucks” Facebook page.

However, before the non-optional change takes place, users are allowed to take a seven-day preview of the arrangement. They can make any necessary changes to their privacy settings before their Timeline profile is published, allowing control over what people can see.

Other additions include a strong presence of new applications. Although many apps are present on the old template, the new version mixes them into the interface to help “express who you are through the things you do.” Companies such as Ticketmaster, Pinterest, Spotify and Foodily all have their own app for their area of expertise and Facebook suggests that “there will be apps for all interests” over time. Through these apps, the users are able to sync and share exactly what they are doing: “Gabe is listening to Arctic Monkeys on Spotify” or “Shanleigh is cooking an omelette on Foodily.” Whereas Facebook’s main niche is connecting with friends and family, this addition not only broadens interactive advertising on the site, but also steps in on competitor Twitter’s platform, which is based around short messages about what you are doing and what you find interesting.

Facebook was created in Febuary 2004 by Mark Zuckerberg and co-founders Dustin Moskovitz, Chris Hughes, and Eduardo Saverin and was subsequently launched from their Harvard university dorm room. As of July 2011, Facebook had 750 million users on the site and showed no signs of slowing down — some have even predicted that Facebook will reach 1 billion users by the end of 2012.

The company will be releasing its IPO (initial public offering of stocks) within the coming weeks, where it is predicted the company will sell about a 10 per cent stake for an estimated US $5 billion.

The release of Timeline in the coming weeks shows that Facebook has the ability and confidence to change layouts without fear of losing its core users. In this day and age, it is hard to think of a world before Facebook. To Facebook has changed communications is an understatement.

Trouble with a capital “P” / to print or not to print