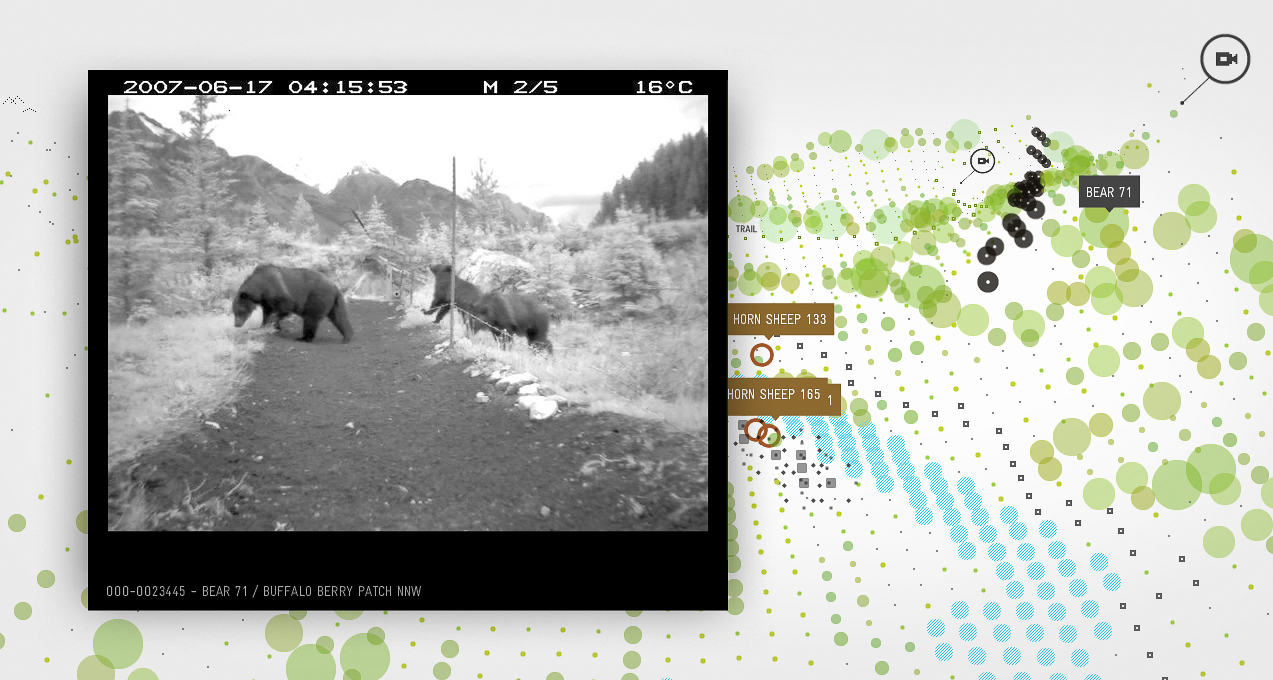 The National Film Board of Canada is drastically changing the landscape of cinema with interactive documentaries such as Bear 71, a multi-user online experience that will also be launched in an installation entitled Bear 71 Live. Bear 71 Live premiered worldwide at the prestigious Sundance Festival earlier this year and is currently available for viewing and interaction online worldwide.

The story, told from the point of view of a female grizzly bear called “Bear 71” (voiced by accomplished Canadian actress Mia Kirshner), outlines how we coexist and interact with nature in the age of technology. Captured and tagged by park rangers at the age of three, Bear 71 is tracked throughout her life in Banff National Park through thousands of trail-cam images from cameras placed in the area. The poignantly written script by Canadian independent journalist J.B. MacKinnon presents an eye opening view of a world we rarely get to see and seldom consider. The question of where the wired world ends and the wild one begins is presented in a unique way through digital interaction.

In the online version of the Bear 71 documentary users are placed in the middle of a digital version of Banff National Park and allowed to wander as they please. Animals, including human users, are numbered. For example, Human 359 642 (you) might come across Fox 53 or Moose 174 along his or her travels. Clicking on either of those animals brings up trail-cam images in which the animal appears in its natural environment. Facts about that species will appear as well, such as current population numbers and recent population decline, lifestyle habits, weight and maybe even a name and a story if the animal has been previously tagged and tracked by rangers.

This digital ecosystem created by the National Film Board of Canada speaks of a simplified world, but one in which life is still always moving. Cougars, bears, crows, foxes, people and even trains and cars move around you at all times. The narrated story of Bear 71 continues for the 20-minute duration of the documentary. Your self-directed wandering time is punctuated periodically by trail-cam images and video clips of key moments in Bear 71’s life. The constant battle against human creations and influence is told brilliantly in this groundbreaking new format.

By their own accord, the National Film Board of Canada, a public film publisher and distributor, is committed to being at the forefront of producing works that “haven’t yet been imagined with technology that hasn’t been invented.” Founded in 1939, the NFB has won over 5,000 awards, including 12 Oscars. Among the 13,000 NFB productions are interactive works, social issue documentaries, amateur animation and alternative dramas; each work provides a unique Canadian perspective. Under the visionary leadership of Government Film Commissioner Tom Perlmutter, the NFB works with emerging and established filmmakers, digital media creators and co-producers in every region of Canada as well as with partners around the world.

“I am driven to unravel that which we do not know, to imagine what is not imaginable; to explore the expressive potential of the digital space to reveal the work in ways that we have never seen,” says Perlmutter via press release.

The interactivity of this documentary isn’t just available to online users; for the physical installation in Salt Lake City or Park City, Utah, interactivity is still incorporated. The half-hour narrative starts at the top of every hour and the audience interacts in real time with the installation. Facial detection software, augmented reality, motion sensors, wireless trail-cams, projection and data visualization all work to enhance the experience of the story.

Bear 71 makes use of quite a bit of irony to get its point across. Using advanced equipment like motion sensors and facial detection technology to emphasize and lament how distanced we have become from nature is a bit of a contradiction. It does make you think though. Is this the new way in which the human race “interacts” with nature?

Sure, in this age of smartphones and global connectivity, we keep tabs on nature more than ever before but keeping tabs isn’t the same as living in harmony with our environment. In fact, as Bear 71 so clearly points out, the opposite may be true. As we rely more and more on technology in our lives, we may grow more and more distanced from our natural surroundings.

The Bear 71 online documentary can be found online at nfb.ca/bear71.

The state of local film is not in flux