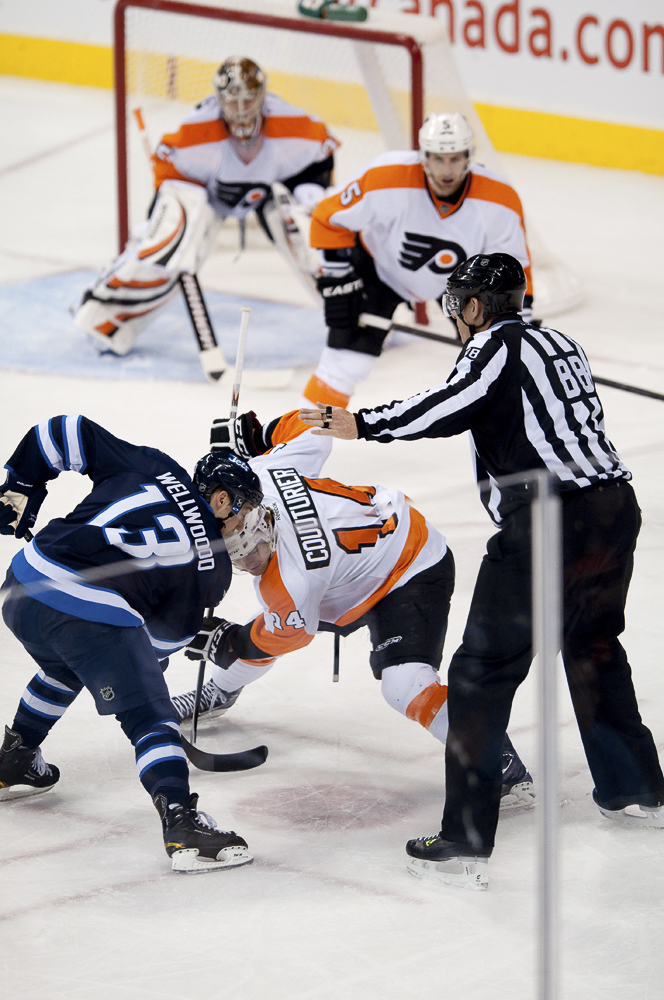 The Jets’ offence needs a patient hand, which management will provide, as well as the addition of some consistency. We’ll find out about the latter by the trade deadline, Feb. 29.

“Not a lot of support out there,” Tanner Glass commented, after the same game.

The Jets do have some valid excuses. Injuries have brought the team outside of its comfort zone. The line up seldom looks the same from game to game.

Evander Kane finished the Jan. 19th game against Buffalo (the last before his injury). It is not unreasonable to hope that the forward’s concussion is minor. Prior to news of his injury, Kane was looking like the sort of blue-line crashing, mesh-rippler in the making he is built up to be. Winnipeg needs to ease up on its criticism of the team’s current leading scorer in order to allow this rising star to mature into a well-rounded asset.

Kane’s first rush in the bout with the Sabres exemplifies this potential: picking up speed in the neutral zone, facing down two well-positioned defence, Kane looked up, made a decision — one he’s come under criticism for avoiding — flipped the puck in and bore down. Anyone voicing lack-of-production complaints should have the sense to see that the alterations in style that Kane is incorporating — the timed dump-ins and the well orchestrated give-and-goes on the rush, the positional awareness on the fore-check — are harbingers of greatness. Not because they’re good in and of themselves, but because they illustrate the strength of a character determined to improve. In a 20 year old with Kane’s speed and skill, there are no better indications of a future goal scorer than drive.

What is Kyle Wellwood doing on the wing? The Jets are nowhere near as deep up front as on defence and squandering a great faceoff taking, adaptable centre like Wellwood won’t help matters. Wellwood is a threat quencher and a trench player — the kind of player I admire most — but he’s best at centre.

Andrew Ladd is not being given a chance to live up to his full potential. He’s 25th in the league for shots on goal and his mere 11 assists tell the story here. He’s a penultimate captain so you’ll never hear a peep out of him but the man is made to distribute the puck. Jets fans have to be getting tired of seeing the sequence of play where the opposing defence keys upon Ladd — with 16 goals a scoring threat in his own right — who then feeds the puck to Jets dominated ice before a golden opportunity is squandered by poor timing or clumsy reception. The Jets’ first line doesn’t need another star: it needs a competent shot.

The Jets’ could use some inspiration. Young Spencer Mahachek’s appearance is a good start. Coach Claude Noel is already praising the young player’s energy. Mark Scheifele will likely be making his rookie run next season. He’s managed 45 points in 31 games with the Barrie Colts. With little to lose in the current season I’d like to see Noel give 20-year-old Alexander Burmistrov a chance on the top lines.

Fans’ cries for a finesse finisher may be loud but with management acting upon a long-term vision don’t expect general manager Kevin Cheveldayoff to veer. The team is built on all round players; expect one more such forward to be signed before the trade deadline.

A look at the age of the Jets tangible assets reveals the likelihood of an approaching an upcurve. Men peak physically around the age of 27. Ladd and Wheeler are 26, and Kane is a mere 20 years of age. The Jets are climbing.