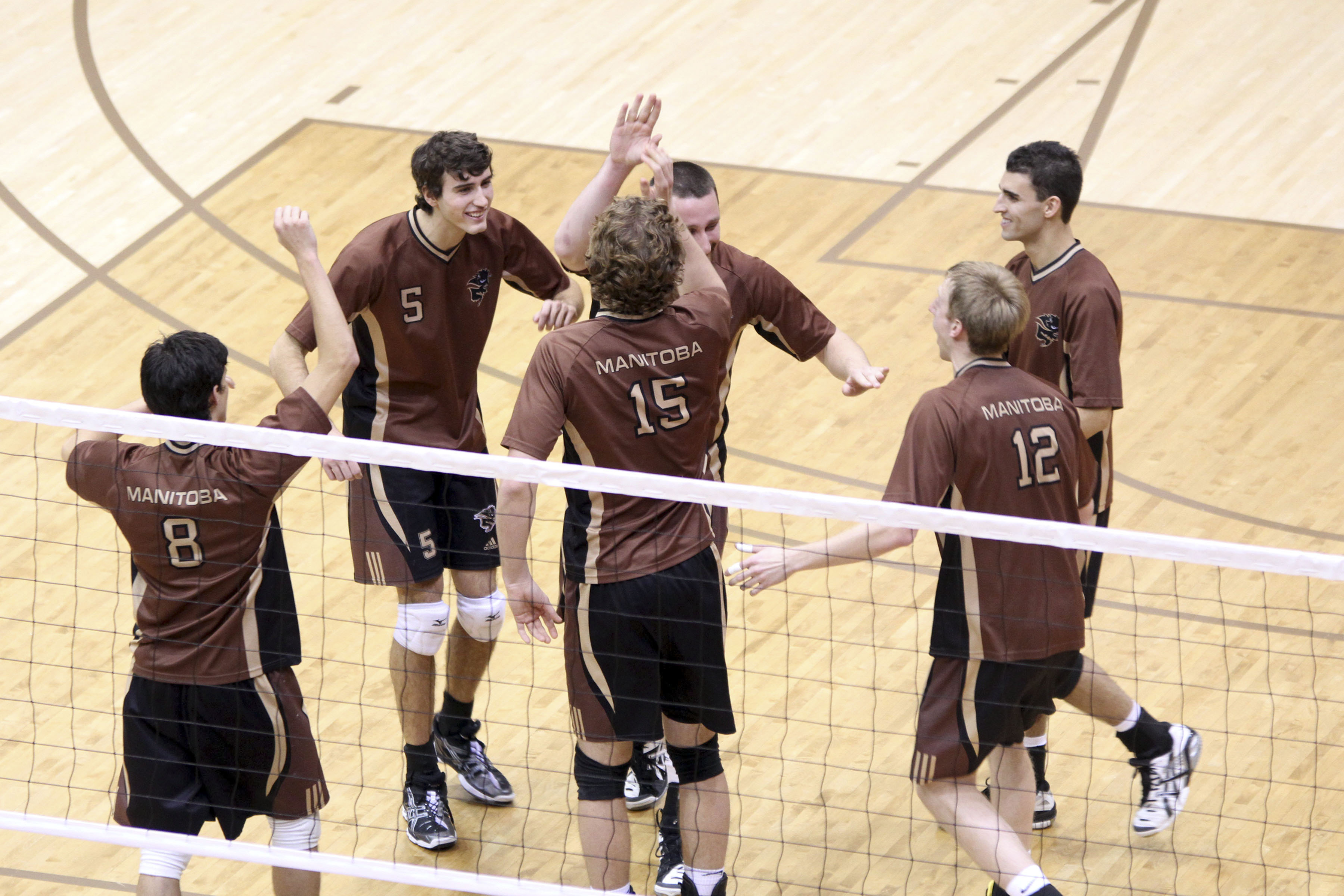 This past weekend, the Manitoba Bison men’s volleyball team completed their regular season, hosting the University of Saskatechwan Huskies for their last two regular season games on Friday and Saturday. By defeating the Huskies both nights (25-14, 31-29, 25-21 Friday and 25-21, 25-22, 25-17 Saturday), the Bisons ended their season ranked number two in Canada West.  Before Saturday’s game began, Bison team captain (No. 7), Ryan Munt was honoured as it was his last regular season volleyball game. Munt is a fifth year student playing in his last year of eligibility in the CIS.

Bison Dane Pischke was the standout scorer of the game with 31 kills.

While the Huskies took the lead early on in the first set, the Bisons were able to close the gap quickly by outplaying and outworking the Huskies. The Bisons soon managed to overtake the Huskies on the scoreboard. Blocking and adapting to Saskatchewan play gave the Bisons the edge, helping them to win the set.

The Huskies hurt themselves at times; they hit several shots out of bounds. Bisons coach Garth Pischke noted, “Saskatchewan has had a real tough time closing games this year. That’s been their trademark, when the game has gone down at the end; they have had trouble coming up with a big play.”

That issue seemed to plague the Huskies throughout the rest of the match.

The Huskies’ starting line-up for the second set was much stronger than in the first. They blocked spikes and defended from Bison attacks. In the first few minutes, the Bisons conceded quite a few points. However, the Bisons were better under pressure and were able to recover and take advantage of the opportunities the Huskies gave to him, which won them the set in the end.

While the Huskies came close to stealing the second set, they were not able to hold together and intimidate the Bisons. The third set was a repeat of the second. Every time the Huskies were in the lead they would begin to make costly mistakes. Huskies coach, Brian Gavlas noted that the Bisons were a strong team and the Huskies mental confidence wasn’t quite strong enough.

“We played at a pretty good level the entire season. When we realized we were in a playoff position we unfortunately were not tough enough to deal with it,” Gavlas said.

The Bisons qualify for the Canada West playoffs, while the Huskies season ends. Gavlas shared his thoughts with the Manitoban: “This weekend was pretty bad. It was a difficult way to end the season. For the majority of the season we had some tough losses that could have gone either way.“