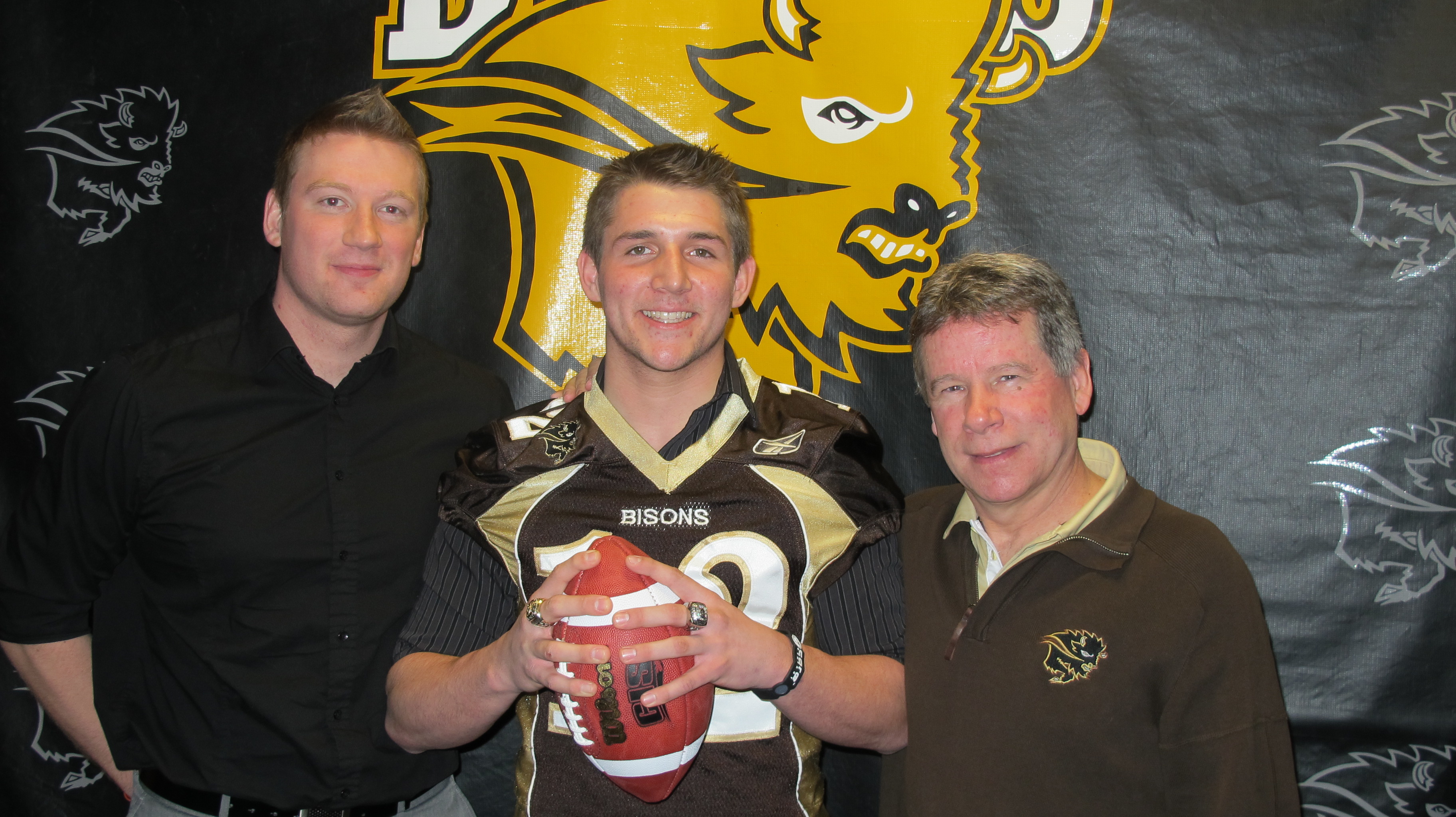 Bison Football has found their next quarterback.

Former Winnipeg Rifles quarterback Ryan Marsch signed his letter of intent for the U of M on Feb. 9. In doing so, Marsch has committed to playing out his CIS eligibility with the Bisons over the next four years.

Head coach Brian Dobie couldn’t contain his excitement at the press conference where he announced the signing of the local talent on behalf of the Bison Football program.

“Ryan has had a tremendous career both in high school representing Manitoba and of course more recently with the Winnipeg Rifles. Last year he absolutely ripped it up,” said Dobie. “He broke records that were set quite some time ago.

“I think it’s very evident who we signed today — the quality of the athlete that we signed.”

After playing high school football at Sturgeon Heights Collegiate from 2006-08, Marsch played for the Rifles in the Canadian Junior Football League (CJFL) for three years (2009-11).

Marsch’s last season with the Rifles was outstanding. He completed 192 passes out of 307 attempts, culminating in 3,030 yards passing (a CJFL record), 31 TD passes and an average of 379 passing yards per game. For his efforts, Marsch was named the 2011 CJFL Most Outstanding Offensive Player, the Prairie Football Conference Most Valuable Player and was a runner up for Manitoba Male Athlete of the year for 2011.

Despite offers to play from many prominent schools from across the nation, Marsch said signing with the Bisons felt like the perfect fit.

“To have a program like this on the uprising with the players and the talent we have now . . . there’s no better option than to go with the Bisons,” said Marsch.

“I believe in the next couple years we will be Vanier Cup champions.”

A bold prediction to make but that seems like the type of expectation Marsch normally places upon himself.

This will be his 11th year playing football and Marsch maintains a strict personal training regimen that sees him working out six days of the week. He appears to embody the confidence and charisma that a coach looks for in a team leader.
Marsch will also be reunited with a pair of teammates from his high school football career. Anthony Coombs and Kienan LaFrance will once again line up behind the quarterback that led the Sturgeon Heights Huskies to the school’s first Winnipeg high school football championship back in 2008. Coombs had an outstanding first season as a Bison, and recently was named Team World MVP at the International Bowl.

“To have the same backfield in university as you did in high school is pretty crazy,” said Marsch. “It’s going to be a big factor. We have talent at running back, we have talents at wide receiver, and we’re bringing in a ton of talent for our O-line, so offensively I think we’re going to be a powerhouse.”

Marsch may not end up catching lightning in the bottle during his first season at the helm of the Bison offence. Regardless, this upcoming season will be memorable for the Bison Football program, with the future looking very bright despite a 3-5 record in 2011.