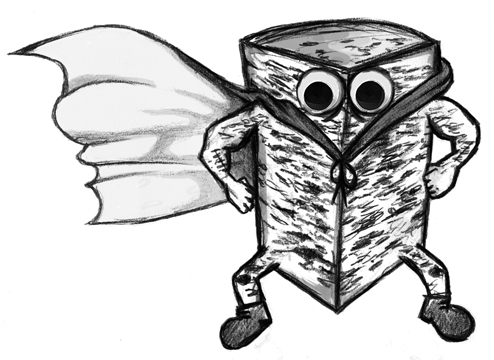 It is evident when cheese goes bad. A foul-smelling odour paired with the presence of uniquely coloured moulds and fungi renders this once pleasurable food item uneatable. As much as your roommate may protest, the overdue cheese must be thrown out.

However, your mouldy cheese may now find use in another field: sterilization. Researchers from the Swiss Federal Institute of Technology in Zurich, Switzerland have successfully taken hold of the fungus found on many blue cheeses to create a self-cleaning foil that dissolves food materials. “Incorporating microorganisms into polymer layers provided bioinspired functional living materials,” published in the Jan. 3 issue of the journal Proceedings of the National Academy of Sciences, describes one of the first instances where scientists have combined a living organism with a material component to generate a possibly useful tool.

Cheese is a general term used to describe curdled milk or cream. Because of the ability to be selective about the concentration of the milk as well as the variance in methods of curdling milk, many different cheeses have been produced globally, each with their own unique characteristics. France and Switzerland excel in the fabrication of cheeses — more than 400 French, and over 450 Swiss varieties of cheese are produced.

Some cheeses, such as Roquefort, gorgonzola, and camembert rely on a mould, Penicillium roqueforti, to craft and shape the cheese. P. roqueforti functions in ripening the cheese as well as protecting the surface of the cheese from other microorganisms it may come in contact with.

The foil consists of three distinct layers: a base layer, a living layer and a covering layer. The base layer, which was made of polyvinyl chloride (AKA “PVC”), provided a level of independent support for the living layer to operate upon. The living layer, made of agar (gelatin obtained from red seaweed), was where the P. roqueforti were maintained and able to grow. The role of the porous, polycarbonate membrane-cover layer was to act as a protective barrier, a means of “communicating” between the living fungi layer and the external environment, as well as a layer for transporting and filtering nutrients down to the living layer.

A sugary broth, made from potatoes, was poured onto the foil and the fungi culture in the foil began to digest the broth. Fourteen days later, the broth had been completely digested. After digestion, the fungi went into a dormant state. It was observed that the fungi’s growth and consumption was wholly dependent upon the amount of nutrients made available by researchers.

In the event of a change in the amount of nutrients present — from a period of some nutrients, to a period of none being available — researchers noted that the fungi would enter an intermediate state of inactivity to assist in preserving energy and survival. The fungi only became active again when more food material was poured onto the plastic membrane cover.

To keep the mould active and functional, the material had to be kept from becoming too dry. The mould remained functional even after being rubbed with alcoholic hand disinfectant or dishwashing soap. P. roqueforti is adaptable to changes in its environment. The resiliency of the mould was attributed to the protective cover layer. As long as the mould remained moist, the generated material had the ability to last for long periods of time.

Even though this is one of the first studies to show a combination of a living organism with a material component, other types of fungi have been extracted to help us solve problems in many different fields, such as agriculture and medicine. Most famous is the synthesis of penicillin, derived from penicillin mould, discovered by Sir Alexander Fleming in 1928. Used to fight bacterial infections within the human body, penicillin was one of the first antibiotic agents ever discovered and is widely utilized to this day.

Although it took two weeks for the full digestion of the broth by the mould to be completed, the ease with which researchers combined microorganisms with a material component is encouraging. The results of the study help to illustrate future applications for this technique in utilizing the functions of microorganisms.