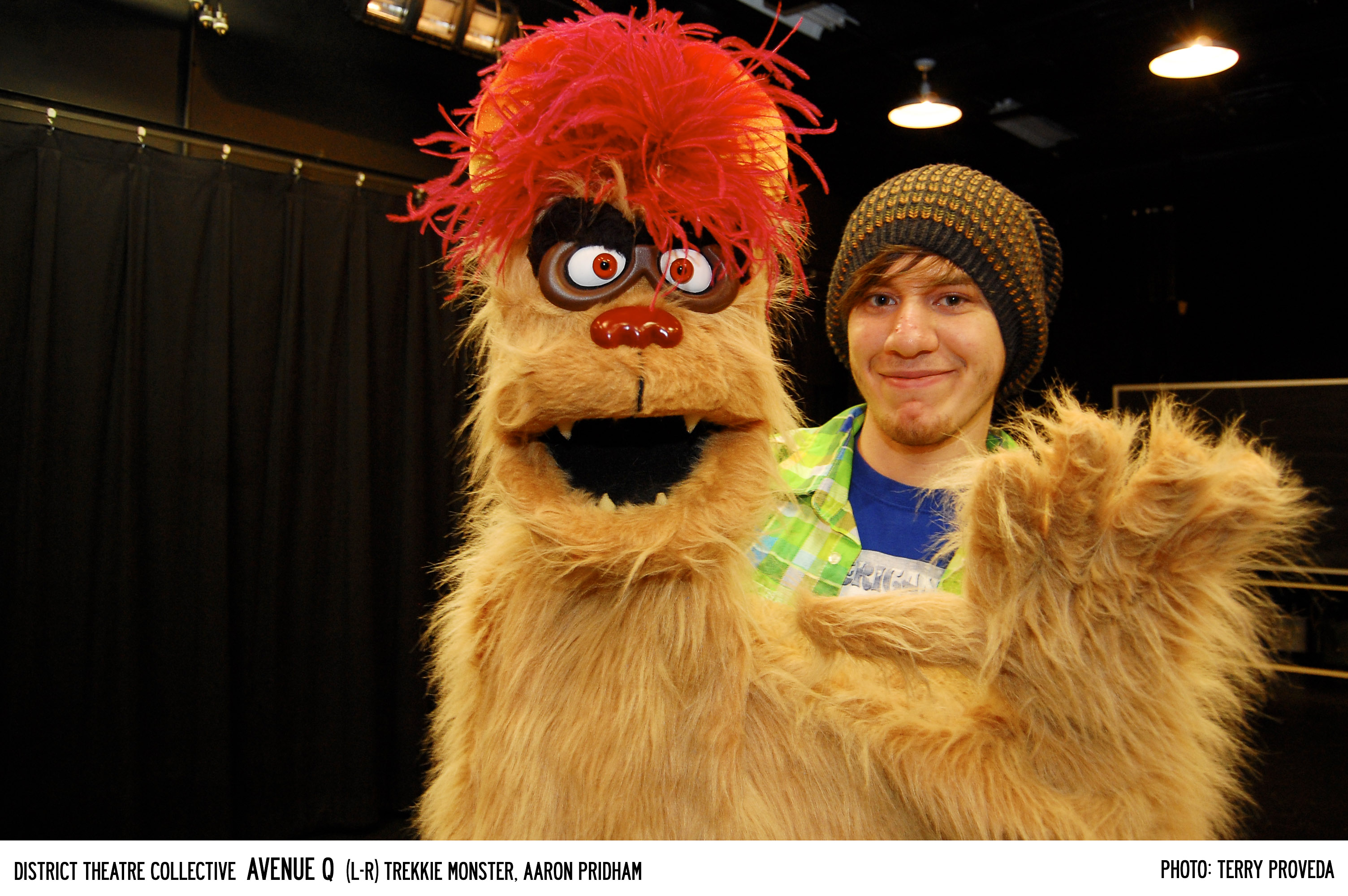 From Feb. 2 – 5, Winnipeggers will have the chance to meet the cuddly cast of Avenue Q when the much-anticipated smash hit Broadway musical comes to the Gas Station Arts Centre here in Peg City.

For those of us who’ve grown up watching shows like Sesame Street, Avenue Q is surely to strike a chord. The show, including a cast of quirky puppets and varied musical numbers, reads like Sesame Street with an adult twist. “Who am I? Where do I belong in this world?” These questions and more will surely be answered as the main character, Princeton, a recent university graduate, stumbles his way through the world in search of his place in it. When he takes up residence in the only area he can afford in New York City, Avenue Q, he’ll meet many interesting people (some friends, others not so much) that contribute to his journey of self discovery. Kate (the girl next door), Rod (the Republican), Trekkie (the internet addict) and Lucy the Slut (self explanatory) are all looking for the same thing as Princeton: a good job, a stable relationship and a purpose.

“He meets a bunch of the characters on the street who live around him and they’re all trying to figure out who they are, what they want to be and what they want to do,” commented Avenue Q’s producer Ryan Segal, a recent graduate of the U of M.

Winner of the Tony “Triple Crown” for Best Musical, Best Score and Best Book, Avenue Q opened on Broadway at the John Golden Theatre in 2003. It was directed by Jason Moore and was nominated for six Tony Awards. Following rave reviews and a tremendous amount of success, Avenue Q was taken on the road — two national tours, international productions and one dedicated Las Vegas show soon opened.

“It was supposed to be a television show actually,” said Segal. “[Robert Lopez and Jeff Marx] thought it would be really interesting to do a Sesame Street for adults, kind of showing you all the things that you want to know when you’re 20 years old, but taught through puppets.”

Avenue Q is quite obviously a complex production; the upcoming Winnipeg performances feature a cast of eight talented individuals and 26 puppets. The company is comprised of recent graduates of Theatre, Music and English programs at both the University of Manitoba and the University of Winnipeg. Aaron Pridham, the actor portraying the main character Princeton, comments: “As someone who grew up watching Sesame Street, it’s pretty much like a dream come true for me.”

Also among the cast are Joshua Balzer, Nyk Bielak, Scott Forbes, Jackie Kurceba, Connie Manfredi, Colin Peterson, Paige Pooley and Stephanie Sy; all of whom have gone through rigorous puppet training in order to prepare for their roles.

“It was pretty difficult, other than the fact that you have to hold [the puppet] up for an extended period of time and that’s just hurting your arm alone,” says Pridham about the training workshops led by puppet directors Tim and Becca Bandfield.

“When you lip sync, you want to have the bottom lip move and not the top lip as much because as humans, we move our bottom jaw, we don’t move the top of our mouth when we talk. Trying to [make] just our thumb move rather than the top of our hand when we have our hand in the puppet was one of the hardest challenges that we [faced] at the beginning.”

While the dialogue is reputed to be hilarious, witty and raunchy all at once, the production is a musical. According to Paul DeGurse, the production’s music director, the songs and styles of music in the show are quite varied.

“The show is a satirical look at Sesame Street and they used a whole wide variety of music on the show, everything from R&B to gospel to kid’s nursery rhymes to get educational messages across to kids,” DeGurse said. “Avenue Q being a satirical look at that, we use the same thing. There are all kinds of musical styles.”

While the production has been an obvious success in many theatres around North America, the show is not without its challenges for both cast and crew. Directing puppets in addition to actors doubles the rehearsal load, says Segal.

“It’s been a huge challenge, but a really exciting one,” he says. “I know lots of the actors have really enjoyed the opportunity to try something really different and build on their skills.”

Pridham comments that the entire experience for him as an actor has been a lot of fun while still presenting a formidable challenge; he had never worked with puppets before taking part in Avenue Q.

“You want to make the puppet’s actions seem natural,” says Pridham. “You want to make sure that they’re looking where we want them to be looking because if a puppet is looking somewhere where the action is not happening, it kind of breaks the illusion. Combining all that together has been pretty difficult but very rewarding.”

Avenue Q seems like the whole package — humor, wit and relatable adolescent issues combined with a small slice of childhood nostalgia. Despite the puppets, though, a warning is due: explicit language, mature themes and full puppet nudity are all included, so bringing the kids to this one may be an unintended eye-opener. As the website for the Winnipeg Avenue Q show states, however, “if you bring your teenager, they will think you’re really cool.” Both the Friday and Saturday night performances are sold out, though there are still four performances left to purchase tickets for if you hurry!

Avenue Q runs February 2-5 at the Gas Station Arts Centre at 445 River Avenue. Tickets are $18 each and available online or by phone. See avenueqwinnipeg.com for further details and show times.

To the cat cave

Observing the Arctic and reconstructing its profile