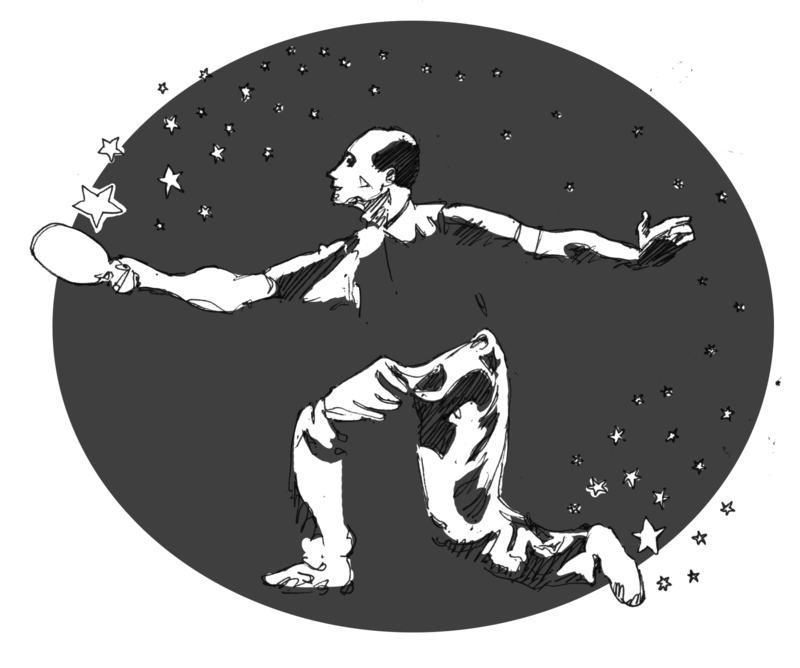 At the age of 16, a plucky young lad named Viktor Barna was named the Hungarian national junior table tennis champion. The honour would be but a glimpse of things to come as Barna would, in later years, blow the doors off the world of competitive table tennis, the sport better known to some as ping pong.

Born 1911 in Budapest, Hungary, Barna was originally given the name Győző by his parents but later chose the more Hungarian-sounding Viktor to avoid the rising anti-Semitism that was pervading the country at the time.

As a lad Barna excelled in various sports, but when his childhood friend Lazlo Bellak received a table tennis table for his 13th birthday Barna knew his true calling. Barna even once said, “[From] the very first time I took a bat in my hand, I knew that this was the sport for me.”

Shortly after his national junior victory Barna joined the Hungarian National Team, leading them to an astonishing seven Swaythling Cups (awarded to the Men’s World Team Table Tennis Champions) over the span of 10 years. Much more than just a team player, Barna was an absolute force of nature in the singles tournament.

Like none before him, Barna projected the quality of an all-time champion. He was charismatic, acrobatic, smart and lightning quick in his reflexes. Barna was even known for his signature backhanded parry, a shot that was deadly when properly executed. At 18 years of age Barna had already helped lead the Hungarian team to a national title; the world of table tennis was simply waiting to see whether or not the young phenom was truly good enough to claim a title in the world singles category.

In an odd, serendipitous twist of fate, Barna’s first ever singles championship match, in 1930, came against none other than Lazlo Bellak, the very person responsible for helping to ignite Barna’s passion for table tennis. Barna won this championship matchup and would repeat that same feat four more times in consecutive order from 1932-35.

On noted cigarette cards, Barna was described as, “Tall, dark and handsome, a perfect-looking specimen of physical fitness, which is necessary to play [table tennis],” as it requires, “speed of eye, hand and foot as well as expert judgment.”

Unfortunately for Barna, the year that marked one of his highest highs would also be witness to one of the table tennis star’s lowest lows. In May, 1935, mere months removed from his numerous title victories, Barna was involved in an automobile crash that left his right arm, his playing arm, severely injured.

While driving in Nantes, France, Barna hit a wet patch of road and lost control. His car flipped over three times before finally coming to a rest. Barna had a platinum plate inserted into his forearm so that he could regain functionality of the injured appendage. The Hungarian had survived the accident, but in the process the world of table tennis had lost its brightest star.

After the crash, Barna struggled to regain the speed and mobility he once had. The man that was famous for absolutely dominating all levels of national competition was now just a shell of his former self. Amazingly, though, Barna still managed one final return to championship form, winning the men’s doubles title with England’s Richard Bergmann in 1939, nearly four years after the devastating crash.

In his time away from professional competition, Barna and friend Bellak decided to take table tennis to India, touring in Bombay, Delhi, Madras and Calcutta. At the time, the Table Tennis Federation of India (TTFI) could only guarantee the two men a portion of whatever money was made at the gate, but the risk more than paid off as both Barna and Bellak played to sold out crowds in each city, making a considerable amount of profit from the tour. To this day, Barna’s tours of India are credited for causing the growth and popularity of table tennis in South Asia.

At the beginning of the Second World War, Barna returned to his adoptive home of England, after having spent time in the U.S., with the express purpose of joining the British Army and fighting the Nazis. The native Hungarian served as a British parachutist in Yugoslavia and after the war settled down with his wife in London.

During his time in England, Barna penned the books How to Win at Table Tennis, Table Tennis Today and, finally, Your Book of Table Tennis.

After the war, Barna also joined the Dunlop Sports Company as a travelling consultant. Barna stayed with the company in this capacity until 1972 when, at the age of 60, the Hungarian national champion died of a fatal heart attack in Lima, Peru.

By the end of his professional career, Barna had accumulated a staggering 41 world championship medals, the majority of which he earned before the age of 25 years old.

Wellek, Felix and the sacred orders