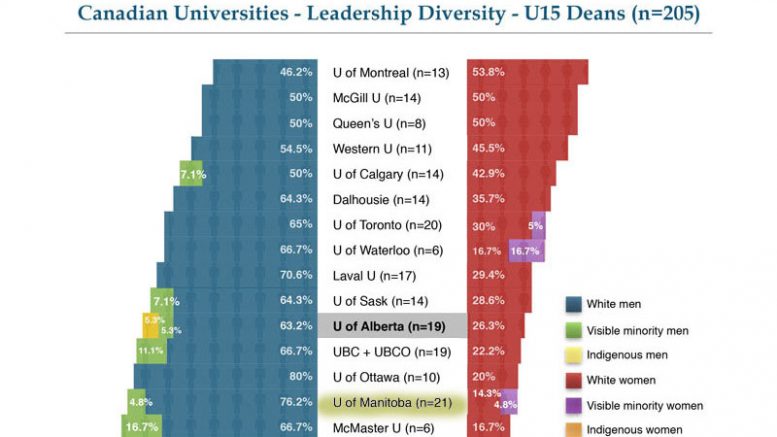 The study found that among top leadership positions at U15 institutions, “women, racialized minorities, Indigenous peoples, and persons with disabilities” are largely underrepresented.

The assessment of social diversity of mid-level and senior leadership positions, including board chairs, chancellors, presidents, provosts, and vice-president academics revealed that those occupying these positions were predominantly white and male.

Visible minorities and Indigenous peoples were underrepresented at mid-level and senior leadership positions.

With regards to disciplinary backgrounds, positions, namely presidents, provosts, and VP-academic, and VP research were analyzed.

According to the study, these positions are mostly filled by individuals from science, technology, engineering, and mathematics (STEM) backgrounds, including the three female presidents and visible minority presidents.

Lastly, an examination of professional backgrounds of board chairs and chancellors revealed that individuals with backgrounds in business, law, politics, and public administration were overrepresented in these positions. Both types of positions are held primarily by white males.

Overall, the U15 research-intensive universities did not include Indigenous females in any of the positions examined in the study.

U of M executive director of public affairs John Danakas said the university’s principles of “equity and inclusion” are reflected in president Barnard’s leadership team.

“President Barnard’s current senior leadership team, for example, includes two vice-presidents who are female, two who identify as members of the [LGBTTQ*] community, and one who is a visible minority.”

He maintained that the university remains dedicated to these principles, and “to continuous improvement with regard to inclusion at all levels of leadership.”