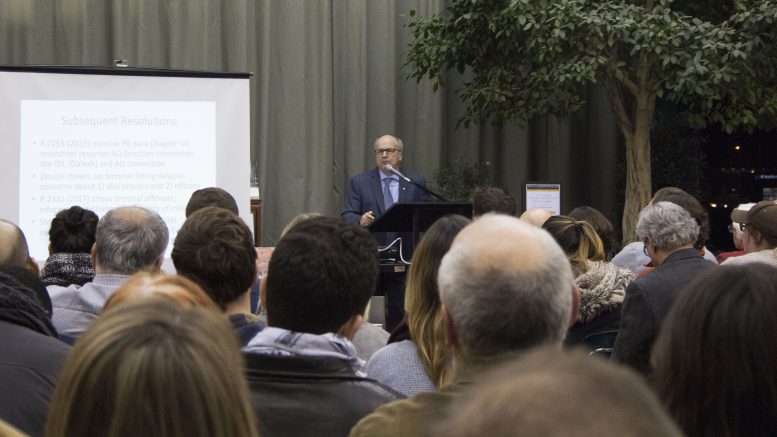 Kicking off the 34th annual J.W. Dafoe Political Studies Students’ Conference, University of Toronto law professor Kent Roach delivered a keynote address assessing the state of counterterrorism in light of the rise of Daesh, also known as the Islamic State or ISIS.

Titled “Counterterrorism at the Crossroads?” Roach’s address examined the sociopolitical implications of counterterrorism measures at the domestic and international levels.

The evolution of counterterrorism in Canada

“When we talk about terrorism,” began Roach, “we are in some ways captive of current and well-remembered events.”

Roach emphasized that terrorism, contrary to notions that tend to bind its emergence to the attacks on 9/11, has existed in Canada “since at least confederation.”

Referencing the assassination of Canadian politician Thomas D’Arcy McGee by a Fenian sympathizer in 1868, Roach said that an important lesson to learn from historical acts of terrorism is the “dangers of overreacting.”

An example presented by Roach is former Prime Minister Pierre Trudeau’s decision to invoke the War Measures Act in response to the Front de libération du Québec (FLQ) during the 1970 October Crisis, when the secessionist movement carried out robberies, bombings, and kidnappings of government officials.

The War Measures Act allowed the government to suspend civil liberties, resulting in 31,700 searches – including 4,600 searches with seizures – media censorship, and the prosecution of hundreds of Quebecers.

Roach also cited the case of Maher Arar, a Syrian-Canadian who was detained at John F. Kennedy International Airport on his way back to Canada from a family vacation on suspicion of being a member of Al-Qaeda in 2002.

“I spent two years working with Justice [Sandra Day] O’Connor on the Maher Arar inquiry which is another example of an overreaction to terrorism that harmed civil liberties,” Roach said.

Arar was held in solitary confinement in the U.S. for two weeks without access to legal counsel before being deported to Syria where he was detained and tortured for almost a year. After no evidence linking Arar to terrorism was found, he was released. In 2007, Arar received $11.5 million after the Stephen Harper government formally apologized for Canada’s role in his “terrible ordeal.”

On Daesh, Roach noted that a key and unique component of the group has been its ability to utilize different forums, like social media, for recruitment.

“As you know from reading the news, Daesh has been defeated in Iraq and Syria [but] it has had a lasting and perhaps counterproductive effect on global counterterrorism,” he said.

“Some of this has to do with a confluence between Daesh-inspired violence, such as the Paris attacks, the migration crisis in Europe, and concerns and anxieties about identity and integration in Europe, the United States and elsewhere.”

“Having lived through 9/11 and lived through our response to 9/11 – and maybe this is just me getting older – I have to say that over the last four or five years, I have found this state of where we are going with counterterrorism to be even more disturbing,” he added.

“It seems to me that internationally, the UN really doesn’t have a particularly good handle on what directions counterterrorism should go,” he said. “And this produces kind of lurching responses to particular acts of violence and it produces a range of tactics without any real sense of overall strategy behind it.”

He noted that the Parliament Hill attack in October 2014 represented a pivotal moment for Canadian counterterrorism efforts.

In response, the Harper government enacted Bill C-51, an anti-terrorism law that gave the Canadian Security Intelligence Service (CSIS) authority to take measures to reduce threats to Canadian security that critics charged violated the Charter of Rights and Freedoms.

Roach voiced his critique of the bill, saying that even if CSIS could accurately identify potential terrorists, “that’s not the same as convicting them criminally.”

In September, Prime Minister Justin Trudeau’s government introduced a new national security bill – Bill C-59. Roach said that although the bill is not ideal, “it fixes quite a bit.”

Unlike under Bill C-51, CSIS is not authorized undertake any action that would impose a limit on rights outlined by the charter without judicial authorization.

While Roach said he thinks careful legislation is key to sound counterterrorism, he emphasized the role of continued evaluations and assessments of legislation.

“If you’re going to have a whole-of-government approach to terrorism and security, you should match that with hope of government review.”

Roach said that with counterterrorism efforts, two scenarios are possible.

He described the pessimistic scenario where “we can have a spiralling of anti-Muslim and anti-immigrant sentiment combined with double standards towards other forms of political violence.”

Roach said the optimistic scenario “is that we will have more evidence-based and multidisciplinary prevention and rehabilitation.”

“We will define citizenship and the criminal law as a common strength that helps protect us,” he said. “We will welcome migrants who are in part victims themselves of Daesh and other acts of terrorism and we will celebrate the considerable resilience that we have seen throughout the world of communities after acts of terrorism – which I fear will continue with some regularity for the foreseeable future.”