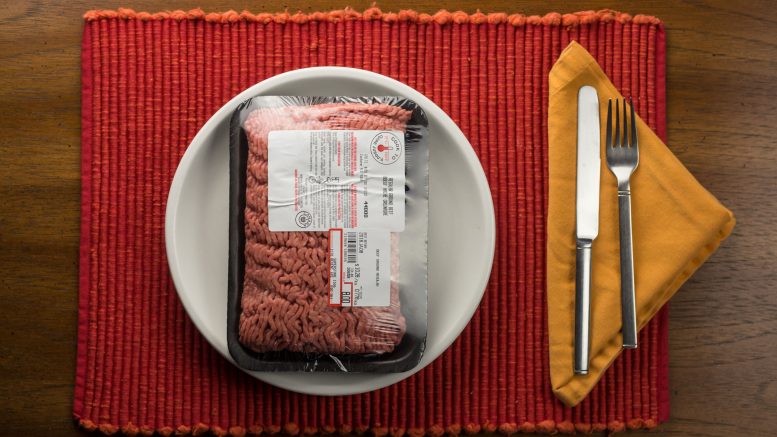 For a month, I left society’s cult of meat and adopted a vegetarian diet.

While I was eating vegetarian, there would be times when I craved certain meats – but what I was craving focused more on comfort foods involving meat rather than wanting the meat itself. This revelation of wanting meat-related comfort foods caused me to reflect on why I choose to eat meat every day and led me to discover the following: I was socialized by a culture obsessed with meat into thinking that eating meat is biologically and socially necessary to sustain my health.

Meat is used as a means of status differentiation. The meat you consume – be it expensive cuts of steak versus ground beef, or your choice or lack thereof for expensive meat-based meals at restaurants – signals your economic standing. Culturally, North American society values meat as an indication of health and success.

Shopping at Costco while on a vegetarian diet brought home the realization of how few vegetarian options there are in grocery stores, especially when compared to meat options. For instance, Costco only offered for sale one style of black bean burger, yet had isles upon isles of frozen and fresh meat and meat products. When shopping at Walmart, I noticed an entire wall of coolers full of meat. Freezers along other isles were replete with pre-made meat dinners. I never perceived the abundance of meat in our society until I had to critically evaluate what foods I was and was not able to purchase from a grocery store.

Upon becoming aware of the taken-for-granted nature of meat by forcefully removing it from my diet, the countless visual displays and celebration of meat around stores becomes astonishing. In meat marketing, there is no consideration for the animal, its respective history and future, or environmental impact: none of these major factors are apparent when buying cleanly cut, prettily packaged meats.

Meat is simply a commodity whose marketing entails no consumer consideration of the implications of widespread meat production and consumption. Society’s mass marketing structure encourages a culture of ignorant consumption: the only information presented to consumers when buying meat are abstract nutritional details, not the wider impact that meat products has on the environment.

Ultimately, the dominance of packaged meat products in grocery stores and the scarcity of contextual knowledge on meat packaging illustrates our capitalist economy’s goal of growth with no concern for the environment. The focus of those in power who control societal institutions and dictate what products consumers may choose from are focused on what product has the highest demand and thus greatest profit. The consumption norms of our culture reflect the institutions which push meat products, and in turn societal values project onto institutions a greater want for meat.

Consumer, producer, and institution – all fundamental elements of our economic culture – need to shift priorities in order to end our reliance on meat production.

Coffee: drink it, know it, love it