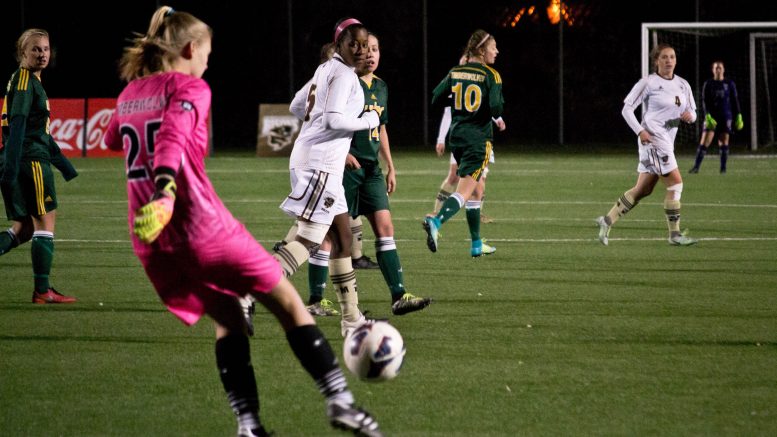 The University of Manitoba women’s soccer team were in tough against the University of British Columbia this weekend in the Canada West playoffs. Manitoba lost 3-1and was promptly eliminated from playoff contention.

All hope is not lost for this Bison team, as they will be hosting the U SPORTS National Championships on Nov. 9-12. Manitoba will await the results of each of the conferences from across Canada to see who will be coming to Winnipeg.

Manitoba has never beaten the UBC Thunderbirds in the program’s history, and now has a 0-13-3 record against the West Coast school.

The T-Birds got to work right away against the Bisons, with Jasmin Dhanda  scoring in the fourth minute. Manitoba was gifted an opportunity in the 40th minute when there was a handball in the UBC 18-yard box. Germans are famously good at taking penalties, and German born Bison midfielder Florin Wagner  made no mistake from the spot, drawing the Bisons level.

Both teams headed into halftime level at one apiece. Emma Cunningham gave the lead back to UBC, pouncing on a scramble in front of the net in the 55th minute. Twenty  minutes later, Dhanda scored her second of the game to ice the game for the T-Birds, dashing the Bisons’ playoff hopes.

Manitoba had only three shots on target, while UBC had 11. Bison goalkeeper Justina Jarmoszko made eight saves in the loss. Jarmoszko was one of the busiest goalkeepers in the Canada West in the regular season, making 86 saves, second only to Dannielle Robertson  of Thompson Rivers University.

Wagner and Hailey Lavarias finished the regular season with seven goals each to lead the Bisons, and join a fifth-place five-way tie for goals in the Canada West.

Manitoba now has a week off before the U SPORTS National Championships held at the Ralph Cantafio Soccer Complex on Nov. 9-12.