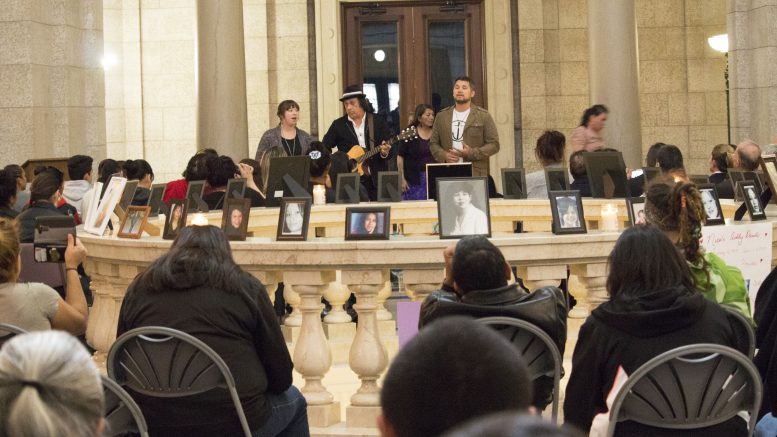 More than 200 people gathered in the rotunda of the Manitoba Legislative Building on Oct. 4 as Manitoba observed its first legislated day remembering missing and murdered indigenous women and girls (MMIWG).

The event started with an opening prayer and pipe ceremony lead by an elder in recognition of MMIWG families.

“It’s also a day to be able to show families the amount of support and love that’s out there for them as they continue to seek justice for their loved ones,” she added.

Fontaine introduced Bill 221, the Missing and Murdered Indigenous Women and Girls Awareness Day Act, in 2016. It received unanimous support in the legislature in May.

Since 1980, more than 1,200 Indigenous women and girls have gone missing or been murdered in Canada, according to a 2014 RCMP report.

Recognizing this with a legislated day of observance aims to spread awareness on the “tragic issue of MMIWG” in Canada.

Further, the legislation aims to use Oct. 4 as an opportunity to educate Canadians on the issue of MMIWG, which Fontaine referred to as a “national crisis.”

“The spirit behind the bill was to acknowledge that these women and girls are Manitoba citizens, they are Canadian citizens, and they deserve to be honoured and recognized,” she said.

“Today, here in Manitoba, is an opportunity, a moment for us to honour them and to stand in solidarity and to support them,” Fontaine added.

Bernadette Smith, the NDP MLA for Point Douglas, was elected in a June by-election, becoming the first MMIWG family member elected to the Manitoba Legislature. Smith was sworn in on Oct. 4.

Claudette Osborne, Smith’s sister, has been missing since 2008. Smith is a long-time advocate on behalf of MMIWG families and is the co-founder of the Manitoba Coalition of Families of Missing and Murdered Women in Manitoba.

Smith said it is crucial for Canadians in general to see themselves reflected in buildings where important decisions are made.

“I think it is super important as a woman, as an Indigenous woman, as a family member of missing and murdered [Indigenous women and girls], that they know that they have a voice inside the legislature,” said Smith.

“I’ll bring their message and their voice into that space and will stand up against this government in ensuring that there’s supports for families.”

Fontaine, expressing her feelings on Smith’s swearing-in, said, “It’s quite something extraordinary that today, on Oct. 4, we will have our first MMIWG family member ever elected, certainly to the Manitoba Legislature, but probably across the country. So how fitting that today she takes her seat for the first time.”

The then-NDP provincial government appointed Fontaine as special advisor on aboriginal women’s issues 2010, in preparation for the National Inquiry into Missing and Murdered Indigenous Women and Girls. That position has remained vacant since Fontaine was elected in 2016.

“That position solely supported families and brought [their] voice to the Manitoba legislature,” Smith said.

“With this new government, we have seen no support” Smith added, emphasizing the need for continued support for family members.

Under Prime Minister Justin Trudeau, the federal government launched a national inquiry into MMIWG in 2015. Since its launch, the inquiry has been surrounded with controversy as families have said hearings have shown a lack of interest in engaging them, and more than a dozen staff members, including commissioners and researchers, have resigned.

“After serving on this commission for the past 10 months, I realized the vision I hold is shared by very few within the national inquiry,” Marilyn Poitras, a professor at the University of Saskatchewan, who resigned as a commissioner, told CBC News this summer.

Fontaine maintained that the inquiry’s timeline of two years was “unrealistic” from the start.

“Anybody that understands national inquiries knows that at a minimum you need five years to set up the infrastructure and then all the supports and structures you need to be able to execute this really traumatizing work on a myriad of different levels,” she stated.

“Right across the country, families were saying that they wanted to be involved in it, that they wanted a families-first approach. I don’t think with this current inquiry that we’re seeing that,” she said.

“They need to go back, listen to the families and take the information from the pre-inquiry gatherings” and “they need to ensure that there’s supports before, during, and after, and I know that that is not happening, and that is the most important thing,” she added.