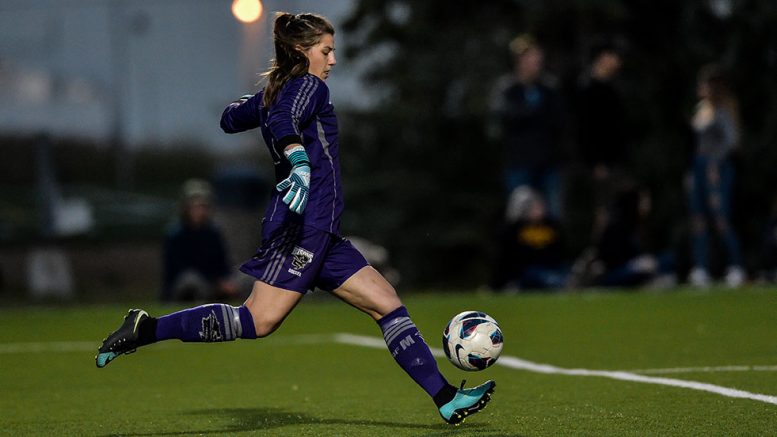 ustina Jarmoszko boots the ball against the Regina Cougars on Sept. 8.

Justina Jarmoszko’s principle when she’s on the pitch is simple.

“My goal is just to be the best athlete I can be out there on the field, and just to help my team out any way I can to show them that I’m there for them,” she said.

Jarmoszko has done that, and then some, during a soccer career that began when she was just three years old.

She was the MVP for her high school team, West Kildonan Collegiate in 2013-14, and earned the same recognition with the Manitoba Blizzard – an elite girls soccer program for players looking to play at the university level – from 2012-14.

Jarmoszko said her time playing with the Blizzard was invaluable, due in part to the fact that she was able to participate in prestigous tournaments in the U.S. against some of the best high school competition America had to offer.

“The intensity was there and it was just kind of like a high you get from it,” she said. “It was just going so fast and it gets your heart pumping, and I just loved it.”

With such an impressive soccer resume, it’s no surprise that Jarmoszko continued playing in university. She joined the University of Winnipeg team in 2015, and despite a less than stellar team record, her individual stats stood out.

Jarmoszko started and played in all 14 regular season games as a rookie, and led the conference with 117 saves and 1,260 minutes played.

Jarmoszko has high expectations for herself, and her stat line was a product of all the hard work she put in.

“Just being that newcomer, that rookie coming in, you had so many expectations on you. The challenge was there and I took it,” she said. “I thought it was great.”

Despite the strong showing, Jarmoszko made a difficult decision at the end of the season: she left the Wesmen soccer program.

“I felt like, as an individual, I wasn’t becoming the athlete I wanted to be. I wasn’t improving there,” she said.

Jarmoszko said her goal was always to continue playing university-level soccer. However, she had to sit out the 2016 season due to U SPORTS transfer rules.

There’s no way you could accuse her of getting rusty, though. She joined the Winnipeg WSA North Stars soccer club, winning a provincial championship, and then going on to competing in that year’s nationals.

“It was good because I feel like once you step back and you’re not at that university level, it takes, I think, a level back from your play,” she said.  “And just having that constant competitiveness kept you on your game.”

Fate would eventually bring Jarmoszko to the Bisons as, during a friendly game against the herd in the summer of 2016, Manitoba head coach Vanessa Martinez Lagunas offered her with the opportunity to join the program.

After taking some time to consider her options, Jarmoszko ultimately decided to come on board with Manitoba, and, despite being only six games into the season, the keeper said she already feels a strong bond with her new teammates.

“Things are great,” she said.  “I really enjoy the group of girls we have here, I feel like there’s chemistry and magic starting to go, and we’ve just got to keep that consistency together, and I think we’ll do really great.”