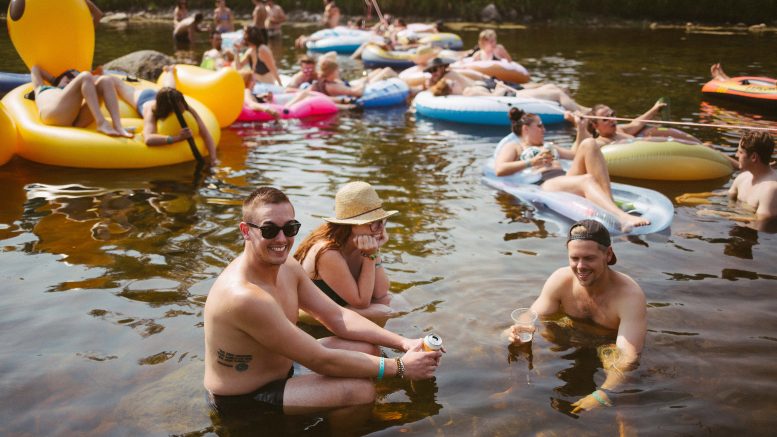 Festival go’ers have a lazy float down the river between sets.

Tucked away on the banks of the Rousseau River, just south of St. Malo, Manitoba,  the Rainbow Trout Music Festival (RTMF) takes place in a location unlike any small festival you’ve been to before.

Upon entering the site, you haul your camping gear down into a miniature valley that makes you feel like you’ve walked into a remote oasis filled with everything you could hope for. On one side of the campground is a beautiful river that is always full of festival attendees basking in the sun, relaxing on tubes with a drink in hand. Or both hands.

This was my first time at Rainbow Trout, and I can tell you that having a river to take a dip in right beside the campground is an absolute game changer, a perfect escape from the often overwhelming heat of a mid-August day. Bordering the campground on another side just a minute walk away you have the stage, a beautifully laid out area complete with food vendors – including the delicious Johnny’s Sticky Buns – artisan vendors, a large tent for watching in the shade, and a raised stage with a vibrantly painted backdrop.

On the night of Aug. 18, the ninth instalment of the annual festival started off with a bang, transitioning from the energizing yet relaxing and smooth sound of Ivory Waves, to the beautiful melodies of the female trio Veneer, to the local rap group 3Peat, who never fail to get the crowd’s hands pumping up and down in the air.

After the music ended there was plenty of dancing left to be had as a DJ played a set under the night tent for those who were just having too much fun to settle down.

After waking up and going for a much-needed afternoon swim to cool down in the blistering sun, Saturday brought another day filled with exceptional music.

Finding a shaded area in which to watch the stage from, the afternoon crowd was blessed with music from the likes of such bands as The Grey Jays with their upbeat melodies and catchy hooks, and the unique ambient sounds and hypnotic voice of Selci.

At 5 p.m. there was a break in the music at the main stage as the festival gathered around a small man-made pond for an hour-and-a-half of open mic where attendees could sign up to play a song in front of the whole festival. This open mic slot is an idea unique to RTMF and it was also absolutely one of my favourite parts of the weekend.

Artists were limited to just one song each. Hearing such a diverse group of artists playing a few minutes of their music, while adults and kids alike were splashing around and having water gun fights in the pond, was as much fun as it was eye-opening to how much talent the music scene in Winnipeg and the surrounding area has to offer.

Saturday night was a party, to say the least. The fast-paced indie group Slow Spirit took the stage at 9 p.m., right before a drag show called Sunshine Bunch left the crowd with hands either covering their mouths with joyous astonishment or lifted in the air with roaring applause. The music really took off when the electro-R&B trio ATLAA S rocked the stage into early Sunday morning, followed by out-of-towners The Avulsions and reggae group The Rastamils, who had everyone on the feet jamming to their infectious rhythm.

The night wrapped up with the otherworldly Smoky Tiger playing a DJ set that, if you’ve seen Smoky Tiger perform before, you know is an experience that is almost impossible to describe.

As a first-time RTMF attendee, I could not have been more impressed, felt more relaxed, or had more fun than I did at this year’s festival. With its picturesque location and incredible acts, Rainbow Trout Music Festival is one event that you don’t want to miss.