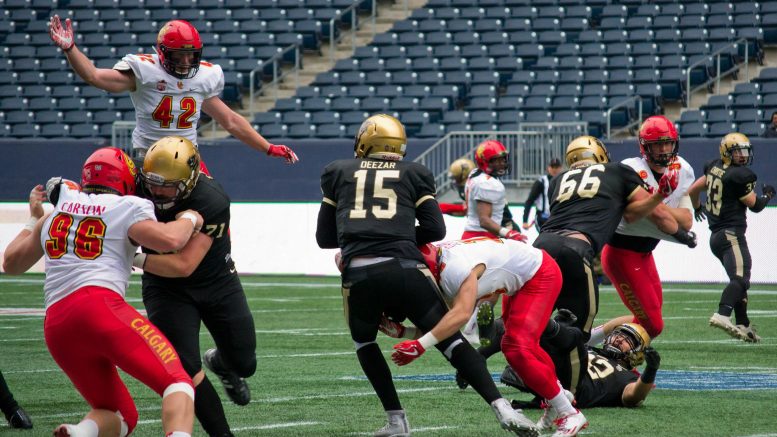 The game was essentially over by halftime, after the Dinos turned five Bison turnovers into 28 points first-half points.

The turning  point in the contest occurred late in the first quarter. Manitoba had driven the field offensively and led 3-2.

Bison defensive back Shae Weekes  appeared to have intercepted Dinos quarterback Adam Sinagra  on the ensuing drive. However, the play was reversed and Calgary continued on to score on the same drive with a quarterback sneak. A two-point convert gave the Dinos a 10-3 lead, which they wouldn’t relinquish for the remainder of the game.

“That interception when we were hot, getting that taken away really, really hurt,”said  Bisons head coach Brian Dobie. “That was big.”

The Dinos kept rolling on the following Manitoba drive, forcing a fumble that took a few bounces and was eventually recovered for a major by linebacker Boston Rowe.

The second quarter was the same story, as the prehistorics blocked a Manitoba punt in the opening minute and turned it into a touchdown on the next offensive drive.

Not even two minutes later, the Dinos were on the board again after another fumble recovery set them up at the Manitoba 30-yard line. It took just one play to make the score 32-3 on a 30-yard touchdown pass to receiver Michael Klukas.

Calgary rounded out the half with two more passing touchdowns – one of which was set up by a recovery on an onside kick.

“I thought we played with them physically, I didn’t think that was the issue,” Dobie said. “But they were such a mature, disciplined, and seasoned team – and a team that knows how to win.”

Dinos pivot  Sinagra threw just 15 passes in the first half but he amassed 153 yards and two touchdowns, due in part to limited pressure from the Bisons front-four. Klukas was the leading receiver, with 73 yards on just two receptions.

Sinagra finished with 15 completions on 23 attempts for 263 yards.

Defensively, Calgary sacked Manitoba pivot Theo Deezar  four times in the first half, holding him to just 59 yards through the air.

Despite the score, Bison receiver Macho Bockru  and running back Jamel Lyles  were Manitoba stand-outs, as Bockru collected plenty of yards after the catch, and Lyles amassed over 150 total yards from scrimmage – 51 on the ground.

The second half was a wash, as Calgary slowly began introducing their backups into the game. Lyles kept on trucking for the Bisons, and finished with 179 rushing yards and two touchdowns, to go with 136 combined punt and kick return yards.

The Bisons head to Regina next to play the University of Regina Rams on Saturday, Sept. 23 at 3 p.m.