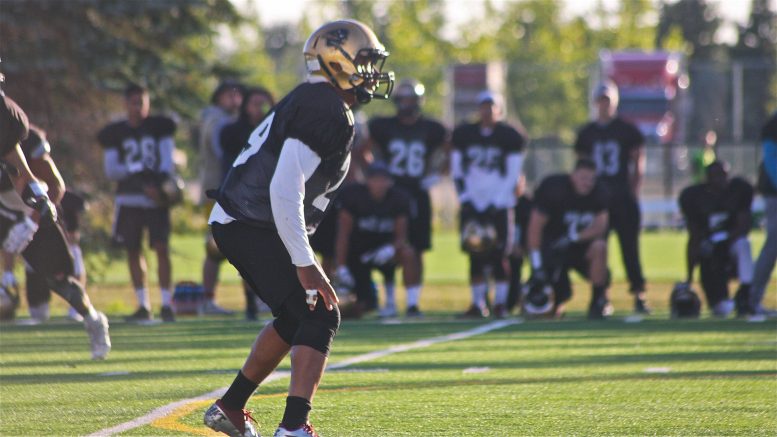 Nick Thomas in action at Bison training camp in August.

You can forgive Bison football linebacker Nick Thomas for being a late bloomer in the game of football.

For starters, he played rugby growing up and invested a significant amount of time in that sport. Secondly, his high school in Surrey, B.C., didn’t even have a football program.

In fact, it’s safe to say that as the years went on, strapping on the pads was nowhere near the top of his thoughts. After all, he had quickly become a high-level rugby player, and was thinking he would continue to play for a men’s club team while attending a local university.

“It just never came across my mind I guess. I was just playing rugby, honestly,” Thomas said.

But as the end of his high school years began to creep closer, Thomas started to have second thoughts regarding his athletic future. He knew he wanted to go to university, and the opportunities seemed larger if he were to pursue football.

“The thing with rugby, there aren’t as many scholarship opportunities,” Thomas said. “Guys that I’ve played with, they’re on Team Canada now and they play at UBC and they haven’t gotten full rides or anything, so I think football had a lot more fan base and money that goes into their programs.”

With that thought in mind, and entering Grade 12, Thomas decided to try his hand at the game for the very first time, making the 15-minute drive to Langley to play community football for the Langley Stampeders.

Not surprisingly, Thomas’s first game had its fair share of hiccups, but he continued to train in his free time to improve his game.

“My first game of community football, I looked at that game and I didn’t know what I was doing,” he said. “I was just hitting people. I honestly knew there was a running back, I hit the running back, and I hit receivers.

“During the end of the season I was really learning. I was watching YouTube videos on how to read offensive lines and how to read quarterbacks.”

While the ins-and-outs of the game took a bit of time, the physicality was never an issue for Thomas. This is due in part to having been a  flanker in rugby, where one of his main goals was to tackle the opposition and try to steal the ball.

“They’re both aggressive sports, so the tackling transitioned for me because that’s what it’s like on defence,” he said.

At the end of his first season of community ball, Thomas was eager to see if he might be able to continue playing at the next level. But he didn’t have a highlight tape, so he simply fired off an email to Bison football head coach Brian Dobie. He never received a response.

His second season with the Stampeders produced entirely different results, as coaches and evaluators were able to see just how hard-hitting and aggressive he was on the field.

The two started talking around the end of January, and Thomas ultimately decided to commit to the Bisons.

He saw his first action in front of Dobie at spring camp in April and, while Dobie admitted that he was “raw” and had “a lot to learn,” he was also quick to praise the rugby star’s upside.

“He can run, and he’s physical,” Dobie said. “His tackling is so good, so to get him out on our field, rather than just see him on film, that was pretty big.”

For Thomas, the learning curve from community football to the collegiate level was large at first, but now that he’s had the time to adjust, he says things are starting to slow down.

And ultimately, for him, the fundamental principles between rugby and football haven’t changed much at all.

“You’ve got to be the alpha out there,” he said. “You can’t be scared of anyone, you can’t be afraid to show that you’re [willing] to tackle anyone, so you really have to be that alpha dog when you’re playing.

“When I go out there, I’m going to tackle anyone.”