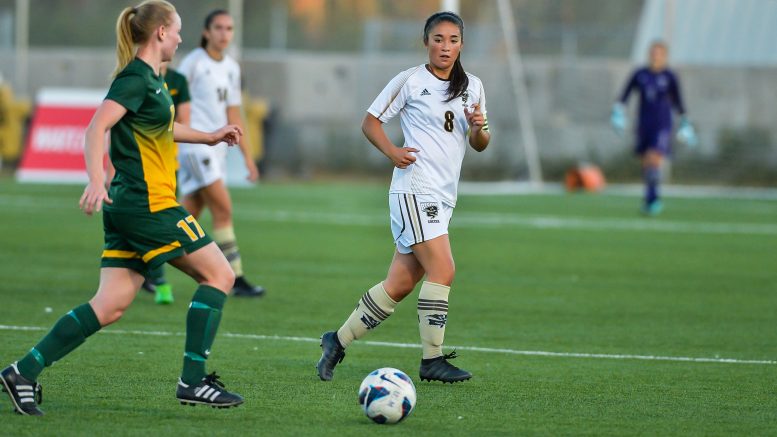 Amanda Wong in action against the Regina Cougars on Sept. 8.

Bison women’s soccer captain Amanda Wong has had a stellar career up to this point. However, her resiliency during moments of tribulation is arguably what stands out most in her story.

When Wong was 13 years old, she tore her ACL for the first time. It was a difficult recovery process, but she made it through.

Just a few seasons later, she helped lead her club team – FC Northwest – to an undefeated campaign, being named the Manitoba Soccer Association’s outstanding female youth player of the year for that season.

Fast forward to 2015, Wong’s second season with the Bisons and first year as captain. Optimism was high for the talented midfielder, who had started and played in all 12 regular season games the year prior.

But before Wong was able to gather any form of sustained momentum, disaster struck, and she tore the same ACL for a second time just one game into the schedule.

“When it happened, it was obviously super devastating. I kind of had a feeling in my head that that’s what had happened, just because I had done it once before,” Wong said.

“It was really hard to be sitting on the bench for that entire season, and some of the graduating girls I would’ve liked to have played with for another season, which is too bad.”

Having gone through it all once before, Wong knew exactly what to expect from the rehabilitation process though, as she observed, “That didn’t necessarily make it any easier.”

It took roughly seven months for Wong to get back to full contact, which is to be expected. What she said surprised her was the adjustments she had to make with regards to the rest of her lower body.

“It was different in the sense that I got a different tendon used as the graft,” Wong said.

“It was majorly different actually. It was hard to even activate my quad muscle or lift my leg for a month.

“It was harder the second time and also just because I was older, the body’s not as young.”

Despite the setback, Wong continued in rehab and was back on the lineup for the Bisons’ first pre-season game of 2016.

To put the icing on the cake, she scored Manitoba’s first goal of the contest.

“That was a huge moment for me and it was super exciting just to know that I had gotten back to the level,” Wong said.

The former standout for FC Northwest was also named captain for the second consecutive year in 2016, and she didn’t disappoint, helping the Bisons make it to the Select Six for the first time since 2008, while also earning her first nod as a Canada West all-star.

“I guess that was just validation, especially for all the work that I’d put in over the last year,” she said.

“My hard work paid off, and I was really proud of myself.”