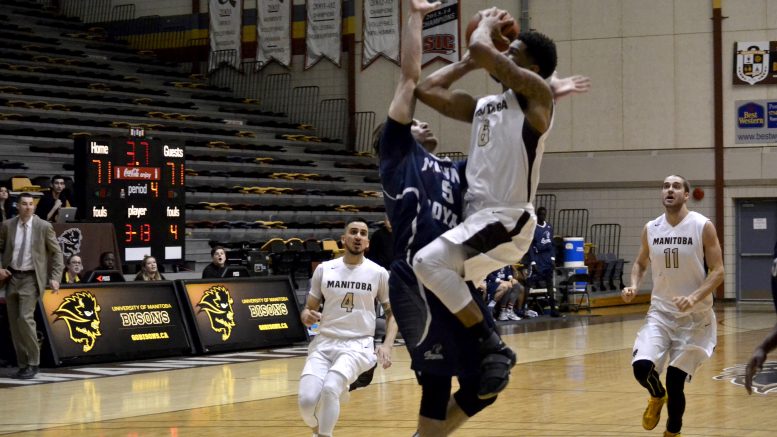 On Friday, Feb. 10, the Bison men’s basketball team got in the win column with a heart stopping 72-71 victory over the Mount Royal Cougars. The win improves Manitoba’s record to 11-8, while the Cougars drop to 8-11 in conference play.

Manitoba stormed the court early on, going on an 8-0 run, and following it up with a 9-0 run to put them up 19-3. The teams exchanged points throughout the remainder of the quarter, with the Bisons taking a 27-14 lead into the second.

The Cougars were able to slow things down in the second, allowing Manitoba to score just 12 points within the quarter. Manitoba’s defense continued to roll holding the Cougars to 15 points. Brett Jewel ended the frame with a vicious dunk, energizing the fans, and sending the herd into halftime up 39-29. Justus Alleyn scored 10 of his 16 points in the opening half.

Mount Royal accelerated to a 16-0 run early in the third, to steal the lead and put them up 48-43. Rookie James Wagner was huge for Manitoba, keeping pace with Mount Royal and scoring the next nine points for Manitoba, contributing to the Bisons 54-52 lead.

The teams were back-and-forth for the entirety of the fourth, and AJ Basi collected eight of his 12 points in the frame. The game was tied at 71 in the dying seconds when Alleyn was fouled on his attempt with just 1.8 seconds to play and made no mistake, giving Manitoba a one-point win.

The home side’s first half wasn’t great last weekend in Brandon, but the strong effort in the first quarter saved them in this game.

The teams will face again on Saturday, February 11 at the Investors Group Athletic Centre. The Bisons will honour their seniors; tip-off is at 6 p.m.