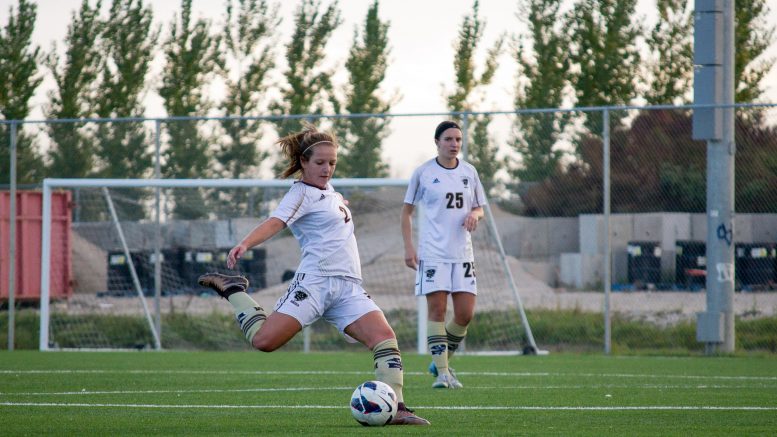 On Saturday, the University of Manitoba Bisons women’s soccer team fell victim to a late game-winning goal, as they lost 2-1 to the UBC Thunderbirds. The Bisons came into this final weekend of the regular season in a close playoff battle for the last two spots in the conference. This was not how they wanted to start, especially with being so close to earning a point before giving up the late goal.

In the first half, the Thunderbirds had plenty of chances with Bison goalkeeper Maddie Wilford saving seven shots. The Thunderbirds would finally breakthrough in the 43rd minute, with a goal from forward Jasmin Dhanda. Wilford had no chance to make the save with Dhanda placing the ball perfectly in the top left corner for her tenth of the season. The Thunderbirds took a 1-0 lead into halftime.

Early in the second half, Bison midfielder Sara Schur had a chance to even the game for the Bisons. She was able to get around the UBC keeper for a shot on the open net, but it was blocked by a Thunderbird defender.

The Bisons came out much more aggressive in the second half, as they were in the offensive third more often than in the first half. The Bisons evened up the score in the 76th minute with Alanna Shaw capitalizing on a cross from fullback Sara MacLennan for the forward’s first goal of the season.

“It felt good to tie up the game, scored my first goal this season, so that was exciting” said Shaw post-game. “Sara [MacLennan] crossed the ball in and I kind of got a touch and the centre back was right on me, and I turned and volleyed it into the net”.

The Bisons would give up a heart-breaking goal in the 85th minute, as the box was crowded and Thunderbird forward Shayla Chorney scored her fourth of the season as she pushed the ball passed Bisons keeper Wilford, to give her team the 2-1 lead, and ultimately the win.
Head coach Vanessa Martinez Laguanas was proud of her team after the game, and said they just need to work on the little things for their final game.
“We just need to keep working in those small milliseconds, and be focused for the whole time,” she said.

Although the Bisons lost the game late, Shaw believes that her team can keep their momentum going into their final game.

“Definitely feel like we have the momentum, and especially me, I got the first goal, let’s keep it going.” Shaw explained post-game

The Bisons host the Victoria Vikes on Sunday, with the team needing a win or tie for a chance to qualify for the post season.

Bisons boast talent from all over the world