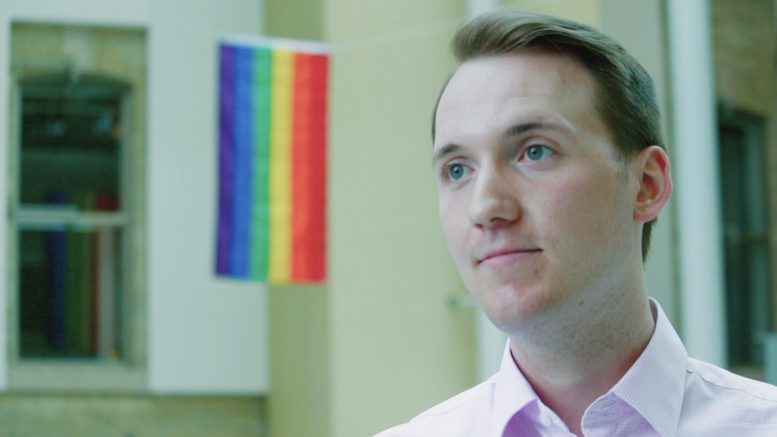 LGBTTQI* Mentorship Group co-founder Shayne Reitmeier in front of the Pride flag in the U of M's Brodie Centre. Photo by Asad Aman.

Students, university officials, and community members gathered in the atrium of the Brodie Centre on the Bannatyne campus May 30 for a flag-raising ceremony marking the University of Manitoba’s first-ever official participation in Pride Winnipeg.

A flag was also raised without ceremony on the Fort Garry campus at the intersection of University Crescent and Chancellor Matheson Boulevard.

Medical students Tharuna Abbu and Shayne Reitmeier, co-founders of the LGBTTQI* Interest Group and LGBTTQI* Mentorship Group for medical students at the U of M, raised the rainbow flag following speeches from David Barnard, the university’s president, and Albert McLeod of Two-Spirited People of Manitoba, Inc.

The ceremony kicked off a week of events including a drag show, a panel discussion on LGBTTQ* health care, an archival display at the Elizabeth Dafoe Library, LGBTTQ* awareness training sessions, and a Zumba party for all bodies and all genders. The U of M also had a float in the Pride parade June 5 and a booth at the Pride festival at the Forks.

Aside from participation in the events, the U of M is also a sponsor. Taken together, this is a level of official involvement in Pride that has never been seen before at the university.

“The university wants to be a community that’s inclusive to everyone, inclusive of everyone, and welcoming to everyone,” said Barnard. “So when the idea arose it seemed a very natural thing to support it.”

In his speech at the ceremony, Reitmeier described the U of M’s official support as “long overdue.” In an interview afterwards, he added that overt and visible support is especially significant.

“The reason I keep emphasizing that it’s visible is we do have student counselling offices, we have certain faculty members who will put up the positive space flag in their office. However, it’s not a unified front by the entire university,” he said.

Reitmeier said the university is “doing a good job at starting to be an inclusive space.”

“However, I feel like we have a long way to go,” he said.

Unlike the Fort Garry campus, which has Rainbow Pride Mosaic, a student-run safe space for LGBTTQ* students, Reitmeier found the Bannatyne campus, which mainly serves students in the health sciences, to be lacking an overtly safe place.

“When I started on the medical campus here, I felt very unsafe,” he said.

“So one of the things that our group has done is have a positive space campaign, which really quite simply was putting up posters around campus so that there was a visual indicator that this is a safe place for everyone.”

The flag-raising took place just a stone’s throw from the front entrance of the Health Sciences Centre, and health care was a major theme of the ceremony. In an interview, Abbu discussed some of the ways new doctors can learn to be more responsive to the needs of LGBTTQ* people.

“I think for the most part people are on board with the fact that you shouldn’t be a jerk,” they said.

“For the most part people get that point […] It’s a little more difficult to recognize how your physical environment or clinical space is unsafe or contributing to stress or unwellness of your patient population.”

Abbu cited education as a solution. For example, they said doctors can be trained on how to prescribe hormones to patients looking to transition, or given up-to-date, sex-positive sex education. Abbu said they see room for improvement in transgender-inclusive health care.

“Many trans people don’t even feel safe going to a family doctor or going to the ER because they’ve had either personal terrible stories in the past, or they’ve heard from other people about really terrible care.”

The theme for the 2016 edition of Pride is “Be Authentic.” In an interview, Abbu gave their two cents on what that means to them.

“I think for me being authentic is a work in progress. It’s something that can often take a lot of courage. There are often very many barriers […] that people have to overcome in order to be their true selves, and it can take many years in order to get to that point where you feel comfortable and where you’re in a safe environment to do so.”

“When I started medicine I was in a place where I wouldn’t even speak about my sexuality and I was very fearful,” he said.

“I was putting on a front that wasn’t genuine. But I had the opportunity to kind of drop a lot of those negative feelings over the years and slowly learn what it is to be authentic.”