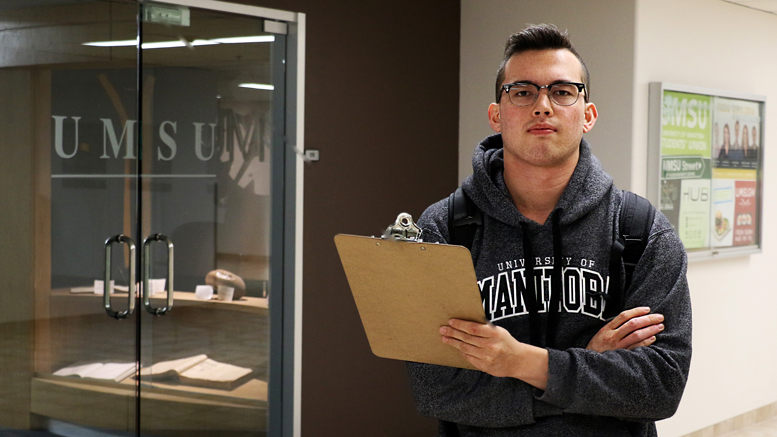 A petition to hold a referendum to remove University of Manitoba Students’ Union (UMSU) president Jeremiah Kopp from office has collected nearly half the signatures required to spark a recall vote.

Isaac Weldon, vice-president of the Arts Student Body Council (ASBC) and one of two students spearheading the petition, said more than 1,000 students have signed on in support of holding a referendum vote to recall Kopp, whose term is scheduled to end April 30.

Under student union bylaws, a petition to recall an executive needs the support of 10 per cent of UMSU membership.
Weldon estimated he’ll need a little more than 2,100 signatures. The union has a total of 22,349 members, according to figures provided by UMSU chief returning officer Dana Gregoire, suggesting a minimum of 2,235 signatures would be required to trigger the referendum.

According to Gregoire, a referendum could run up a tab in the $20,000 range and the earliest a result could be reached is April 15 – two weeks and one day before Kopp’s term expires.

For that deadline to be met, signatures would have to be collected and delivered to UMSU council at its March 24 meeting. A three-week campaign period similar to an UMSU general election would follow.

Gregoire also noted the vote would fall during exam period – regular classes wrap up April 8 – which could impact how many students vote, noting a turnout of less than five per cent could possibly render the referendum invalid.

Weldon acknowledged students have questioned the expense and timing of the recall motion but said a goal of forwarding the petition is to shed light on the issues facing council and engage the student body.

“As [things] are right now, there is a significant disconnect between what UMSU does and what the students need or what they want,” he said.

“Part of that separation is due to ignorance and hopefully now that the issues are coming to light, there will be a movement towards a change in what UMSU does and how it acts.”

Weldon said students have been receptive to the petition and that most cited Kopp’s alleged misuse of an UMSU executive credit card for supporting the initiative.

Kopp was cut off from use of the credit card at an UMSU council meeting March 10 after nearly $14,000 in allegedly unapproved were presented to council.

The questioned expenses include items as innocuous as $2.50 purchases from Coca-Cola machines and $11 U of M parkade fees to nearly $4,000 in office furnishings, a more than $600 bill at Joey restaurant, $350 at the Manitoba Liquor Mart, and $230 at Shoppers Drug Mart for Lindor chocolates.

“The students themselves don’t have those kinds of luxuries,” said Weldon. “It’s something that should be kept in mind when spending any kind of student money.”

“Regardless of whether or not UMSU approves these expenditures, it’s student money and at the end of the day it’s up to the students to decide how they want their money spent,” he added.

When Weldon and ASBC chairperson Cole Kubay first presented their petition to council at the same March 10 meeting the allegedly unapproved expenses came to light, they said the petition was motivated by two factors.

One was a letter written by a former University of Winnipeg Students’ Association president claiming Kopp and vice-president advocacy Rebecca Kunzman floated the idea of increasing UMSU’s levy on students to offset university budget cuts at a meeting with the provincial minster of education and advanced learning in the spring of 2015. The other was Kopp’s course enrolment, which exceeds the eight credit hours allowed for members of the executive, according to the student union’s bylaws.

Both Kopp and Kunzman said the letter misrepresented what was actually said at the meeting. UMSU council passed a $64 annual fee increase in December.

At the March 10 meeting, UMSU council approved a motion triggering a forensic audit of UMSU finances for the 2015-16 year-to-date to begin no later than March 31.

Student union administration is currently compiling proposals and cost estimates which could be presented to council as early as its next meeting, March 24.

“Whether or not it comes back with any sort of evidence that the money was misspent, I think what we started now – and what’s really important – is that there’s a movement towards a more responsible student government wherein money is spent on things that everyone can agree upon or at least a majority of students can say that this is a good use of our money,” said Weldon.

Kopp said all the expenses are legitimate and told the Manitoban he is confident an audit will find the same, claiming the issue was brought up as a political attack against him by vice-president student services Jessica Morrison, and many of the expenses were in line with UMSU’s established practices.

“It’s what’s been done at the organization for many, many years,” Kopp said in a previous interview with the Manitoban.

However, Morrison – who tendered her resignation the same meeting – claimed otherwise.

According to financial statements made public at the March 10 meeting, Kopp had spent a total nearly $29,000 on the credit card since taking over in May.

Cathy Dowd, who spent two years as an elected UMSU executive until 2006 and served as executive director of the union from 2008 to 2013, took umbrage at Kopp’s claim that spending student money on things like alcohol and elaborate meals is standard procedure.

“I guess, in hindsight, there should have been something that was clear [and] written out that these are the standards,” she said.

“I never had any problems with any executives […] They didn’t want to spend money that they couldn’t justify,” she said.

“Whether it’s at council or on the front page of a newspaper, they don’t want to have to justify to students why they’re spending their money on frivolous things like alcohol and things that aren’t accessible to all students.”