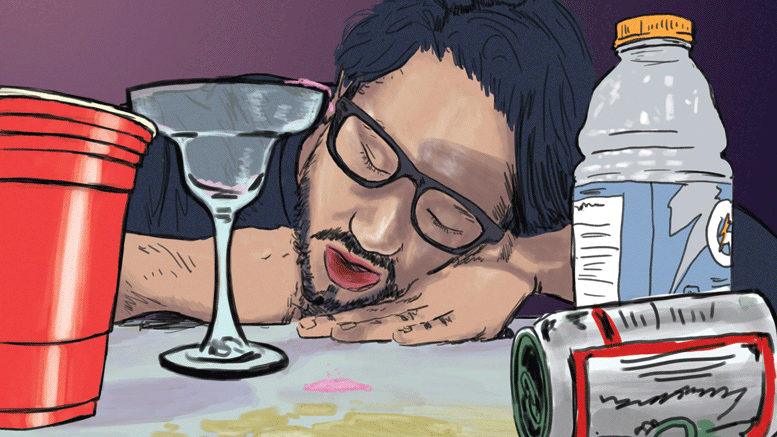 Most individuals drink alcohol and experience a rather balanced mix of pleasant and unpleasant effects. However, some individuals have alcohol intolerance – colloquially known as alcohol flush syndrome – which makes alcohol consumption a mostly negative experience.

Between one-third to one-half of individuals of East Asian descent have alcohol intolerance.

Alcohol is literally a poison; luckily for humans, the liver is adept at eliminating all sorts of poisons from the body, including alcohol.

The elimination of alcohol from the body is dependent on two liver enzymes called alcohol dehydrogenase and aldehyde dehydrogenase.

Dehydrogenases are enzymes, proteins that speed up chemical reactions. They work by ripping hydrogen atoms off of the alcohol molecules.

Ripping hydrogen atoms off of molecules is the main way our body harnesses energy from the food that we eat; it liberates electrons from molecules, which are later used to drive energy-producing processes in the mitochondria of our cells.

Once alcohol enters the body, it is converted into acetaldehyde by the alcohol dehydrogenase enzymes.

Acetaldehyde is a toxic molecule and is damaging to cells and tissues. The compound is also mutagenic, which means it causes mutations in DNA. These mutations can cause cancer, making acetaldehyde carcinogenic as well. Acetaldehyde is also thought to be partially responsible for hangovers.

The two alcohol-metabolizing enzymes are polymorphic, meaning that they have different variants between populations, which are called isoforms.

Alcohol intolerance is caused by faulty versions of these two genes, particularly ALDH2.

The mutant form of the ALDH2 gene is called ALDH2*2 and has almost no activity. Since ALDH2 cannot function to eliminate acetaldehyde, the toxic molecule accumulates in the body.

For some people, it gets worse.

Two alcohol dehydrogenase variants found in Asian populations are associated with faster alcohol metabolism. One of these variants has been shown to work up to 100 times faster than other common isoforms.

These individuals not only feel the inebriating effects of alcohol for a much shorter time period, but start accumulating acetaldehyde faster as well.

This efficient variant of alcohol dehydrogenase, compounded with improper acetaldehyde elimination by faulty ALDH2*2 enzymes, makes drinking an unpleasant experience for many individuals of Asian descent.

There are some benefits, however, and many individuals believe that these mutations arose in populations for this exact reason.

For one thing, individuals with this mutant combination are at a much lower risk for alcoholism. Moreover, ALDH2*2 has been shown to correlate with higher levels of oro-pharynx and esophagus cancer in individuals that drink.

Even despite the unpleasant side effects of alcohol intolerance, individuals will still choose to drink, often due to social pressures. Happy St. Patrick’s Day!

The philosophy of stress