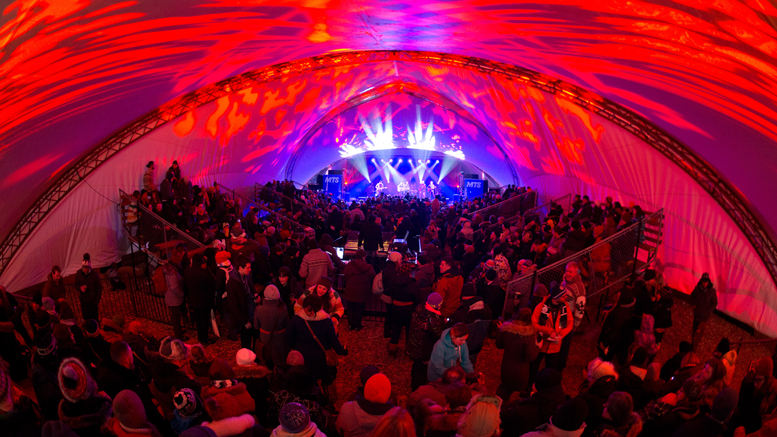 Festival du Voyageur has been a staple of Franco-Manitoban culture for almost 50 years.

Hailed as the largest outdoor winter party in Winnipeg, Festival will bring French- and English-speaking Winnipeggers alike to Whittier Park from Feb. 12 to 21 to get their fill of diverse, quality musical acts, local history, and assorted winter activities.

Festival usually falls on reading week and did so again this year, perfect for university students looking to unwind from their studies.

Chances are good that if you grew up speaking French in Winnipeg, you grew up going to Festival. Julien Desaulniers, artistic producer for Festival, is no exception: his first concert was at Festival when he was just a few years old.

At 18 years, Desaulniers found himself playing his first paying gig as a musician at Festival. A number of years later, he progressed to booking the bands himself.

Desaulniers has a lot on his plate this year, with 140 artists booked to play – more than there has ever been. He is particularly excited for the performance by Sweet Crude, an indie-rock band from New Orleans that has never been to Festival.

Other highly anticipated acts include Les Hay Babies – a popular Québec-based folk band – and Coeur de Pirate, an internationally known singer-songwriter from Montreal. There are a few English-speaking bands as well, such as Bend Sinister from Vancouver.

When selecting the bands to play at Festival, Desaulniers’ main goal is to reflect the francophone community and its culture.

“The goal is to reflect the community, so just as many francophone bands as we can get, and that’s it,” said Desaulniers.

He seeks out high-quality bands, starting with acts from Québec, New Brunswick, Nova Scotia, and sometimes a few international acts.

From there, he looks for talented musicians of Manitoba’s French-speaking community. Festival is always looking to support emerging artists as well, to showcase new talent alongside more seasoned acts.

Many of the acts at Festival are high energy full bands, featuring rapid-fire fiddling, and encouraging amateur jigging in the crowd. For those seeking a more relaxed environment this year, singer-songwriters will be performing more laid-back sets on select days in the Snow Bar at Voyageur Park.

The Université de Saint-Boniface Portage tent is another new addition to Festival this year. It used to be the Souvenir Tent, but was not being used to its full potential.

At night, the Université de Saint-Boniface Portage tent is featuring events to appeal to a wider range of people, like karaoke and a singles night on Valentine’s Day.

While Festival is a staple of Franco-Manitoban culture, it’s by no means exclusive to just the francophone community.

“The focus is francophone culture of course, but we’re trying to be as inclusive as we can with our programming, and we want everyone to be a part of it.”

Festival du Voyageur runs Feb. 12 to 21. Further information on schedules, prices, events and activities, and exhibits can be found at www.festivalvoyageur.mb.ca