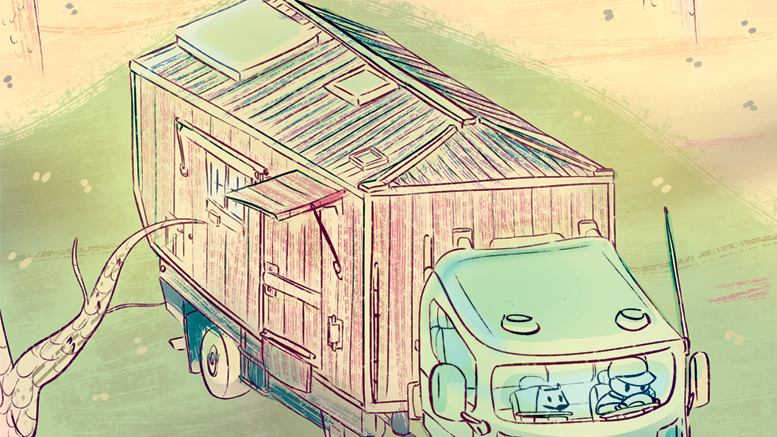 The housing market is a major issue across many large cities in the western world. Finding affordable, quality living space is a challenge in places like New York, San Francisco, London, Toronto, and Vancouver. For today’s young professionals, trying to get by with entry-level wages, while paying off student loans and living day-to-day, can be a difficult and fragile balance.

Emerging from this economic climate are various alternative lifestyle movements which free young professionals from the financial drain of large mortgages with high interest rates, and enable them to channel their money towards student debt, travel, and their savings account, sacrificing only the traditional concept of what a home is.

Here is a look at three movements that are gaining traction in North America.

Micro-lofts, also known as micro-condos or micro-apartments, are generally between 250 and 450 square feet, and laid out in a way that allows the bedroom, living-room, and kitchen to co-exist as one large space. They are basically the same thing as bachelor suites in apartments, typically seen as a single-person unit.

Micro-lofts are generally built in a way that cleverly maximizes every inch of space available. Usually innovative architecture and engineering is involved, such as multi-functional furniture, manipulation of vertical space, or portable room dividers. The goal of a micro-loft is to provide a single space in which you can sleep, eat, work, and entertain. The philosophy is to have an affordable place to live without sacrificing any of the convenience or comforts of a traditional home.

Micro-lofts have begun popping up in cities like Vancouver and Toronto, where they have been met with mixed reaction. According to Vaughan, in Vancouver, where the cost of living is significantly higher compared to other cities in Canada, Reliance Property established one of the first micro-apartment buildings in the city. The project was started in 2013, with an expected completion date of 2016. In just over one month after opening, application for unit rentals that were between 219 and 291 square feet, every unit was claimed.

Currently, there are some questions on the long-term marketability of micro-lofts. With these questions, some banks may be hesitant to provide mortgages. Additionally, micro-lofts are cheaper overall than more traditional homes, but are more expensive on average per square foot. Some experts question whether or not the introduction of micro-apartments will have a negative impact on the housing market for this reason.

Micro-lofts also depend on the occupant to be predisposed to a certain lifestyle. Generally, this means minimalists who don’t own a lot of possessions, and may spend a significant amount of time away from home, such as at work, local coffee shops, or libraries. Micro-lofts can also be difficult to manage for more than one person, let alone families.

Very recently in Manitoba, a company called Manitoba Mini Homes opened its doors to customers interested in small customized homes. Unlike mini-lofts, these are small, individual housing units, which are insured as trailers by Manitoba Public Insurance.

Starting at $28,000, they range in size from 100 to 400 square feet, and can function as temporary, seasonal, or year-round residences. Mini-homes have all the necessities of traditional homes, including a kitchen, shower, toilet, washing machines, living-room, and bedroom. The homes, usually about 9,800 pounds, can be transported on wheels, but a more permanent foundation can also be built.

Darrell Manuliak and Anita Munn started the company and began showcasing some of their mini-homes in November. Their website describes the homes as energy efficient, environmentally friendly, and an affordable option for homeowners.

Over the summer, the Tiny House Festival was held near Montreal, where various mini-homes ranging from 200 square feet to just over 300 square feet were showcased by exhibitors. The largest home shown was valued at around $50,000.

When news outlets picked up a story on a 23-year-old Google employee in San Francisco living in a 128 square foot truck, many were not sure whether they should consider him crazy or a genius.

The employee purchased a 2006 Ford cargo truck for US$10,000 and added in a bed, a dresser, and a clothing rack, then parked it in the campus parking lot. Since Google provides employees with meals and a gym with shower facilities, he doesn’t require a kitchen or a bathroom to get by. His only fixed cost is insurance, which costs him about US$121 per month.

The employee stated that he could not justify spending the minimum of US$2,000 per month on rent for just a single bedroom. By living in the truck, not only does he save on the cost of rent, but also subsidizes the cost of transportation.

The lifestyle has afforded him the ability to enjoy his life in San Francisco by freeing up money available for going out and dining at nice restaurants. He has already paid off a significant portion of his student loans, and estimates that he will pay off the remainder within the next six months.

Although it has insofar received limited media coverage, van dwelling is actually a well-established movement, with entire online communities of individuals committed to living in vans who share stories, tips, and photos of their living space.

Van dwellers, as they call themselves, generally opt to purchase vans which enable them to live clandestinely – typically in work vans with few or no windows.

Some of these van dwellers sink lots of time and money into renovating the cargo area to provide all the necessities they need to live. Generally, this includes a bed, a small kitchenette, solar panels to generate electricity, and storage space. Some install a portable shower. Others rely on publically accessible Wi-Fi for Internet access and day-passes at local gyms for shower facilities.

A number of van dwellers are also travellers who drive their vans from city to city, sometimes working remotely or living off of the money they’ve saved.

The lifestyle attracts those wanting to free themselves of the geographical and financial burden of a traditional home.

Some vagrancy laws and no-camping laws make van dwelling an illegal activity. Most van dwellers have reported little difficulty when encountering law enforcement. They are usually just asked to leave the street or property they are on, or given a fine at worst. It is, however, possible to be arrested.

While these unusual living arrangements are not for everyone, they most certainly are some of the more interesting and creative solutions to enable this generation to have it all: a home to live in, the ability to travel (whether through saved money or by living in a van), and financial freedom.

Drought signals need for sustainable agriculture
Climate challenges lie ahead, but governments can reduce risks by investing in food