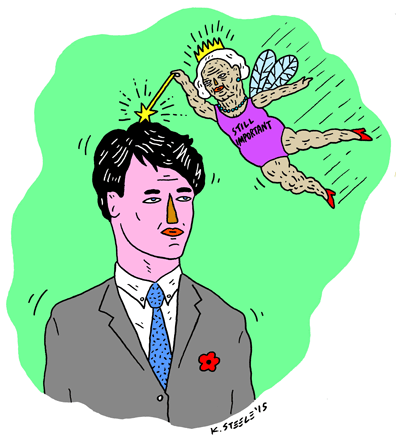 Watching Justin Trudeau and his 30-member cabinet being sworn in earlier this month, something struck me as extremely off-putting about the whole affair.

It wasn’t the spectacle they made of Trudeau, his family, and his ministers’ long walk to Rideau Hall, where he was to be sworn in. Not the excited members of the public who came to watch what was ultimately a long process of 31 people filling out paperwork for a new job. Not even the media’s swooning as they spoke excitedly about who might make the cut for cabinet.

These sorts of ceremonies are always dressed up with excessive formality and theatre. But all of those tradition-based idiosyncrasies aside, one aspect seemed particularly dated: the oath Trudeau and his ministers made to our head of state, the monarch of Canada, Queen Elizabeth II.

“I, Justin P. J. Trudeau, do swear that I will be faithful and bear true allegiance to Her Majesty Queen Elizabeth the Second, Queen of Canada, Her Heirs and Successors, so help me God,” he said, first in French, then in English.

“I, Justin P. J. Trudeau, do solemnly and sincerely swear that I will be a true and faithful servant to Her Majesty Queen Elizabeth the Second, as a member of Her Majesty’s Privy Council for Canada. I will in all things to be treated, debated, and resolved in Privy Council faithfully, honestly, and truly, declare my mind and my opinion. I will keep secret all matters committed and revealed to me in this capacity or that shall be secretly treated of in council. Generally, in all things, I shall do as a faithful and true servant ought to do for Her Majesty, so help me God.”

Finally, he ended with an oath more relevant to his responsibility to Canadians.

“I, Justin P. J. Trudeau, do solemnly and sincerely promise and swear that I will truly and faithfully, and to the best of my skill and knowledge, execute the powers and trusts reposed in me as prime minister, so help me God.”

After his oath he shook hands with Governor General David Johnston, who serves as the Queen’s representative in the country, and was met by a roaring round of applause and a standing ovation by those in attendance. Afterwards, each of the incoming ministers came up one by one to make similar oaths.

It shows a special sort of cognitive dissonance to swear an oath of fealty to a British monarch as part of the ceremony to be recognized as the elected leader of Canada – specifically, in the year 2015, with no threat of violence to our country. In Trudeau’s defence I have little doubt both Thomas Mulcair and Elizabeth May would do the same if they had won – we already know from previous ceremonies that Stephen Harper was willing to take that oath.

Despite the seemingly ubiquitous willingness among Canadian politicians to swear an oath to serve that British lady with all the funny hats, I’m convinced it’s not the kind of tradition I want my country to be a part of.

The power of the Queen and the governor general is often argued to be symbolic, but that’s not necessarily the case. In December 2008, we were treated to a prorogued Parliament at the will of then-governor general Michaëlle Jean. Stephen Harper went to her with a request to prorogue Parliament – temporarily shutting it down – to prevent opposition parties from triggering a vote of non-confidence for his minority government, and replacing it with their own coalition government.

In the time that Parliament was out of session, Harper was able to secure the support of the Liberals to maintain power through a stimulus budget.

Jean’s decision on whether or not to intervene had a major impact on the future of the country. As nice as she appears to be – I’ve heard great things about her charity work and time with the CBC – I’m not really comfortable leaving that sort of decision to someone approved by, and representing, a foreign monarch (even if she was recommended for the position by then-prime minister Paul Martin). It’s hard enough giving that sort of authority to elected politicians.

The same argument applies to our current governor general, Dave, or His Excellency the Right Honourable David Johnston (as his friends like to call him). He’s a well-respected academic and administrator, and I don’t know of anything he’s ever done to make me think he wouldn’t make for excellent company at dinner.

That being said, the pomp, the prestige, the power, all tied to the birthright of a family of thin-blooded Brits, needs to go.

Even if the Queen’s position of head of state came with no power and was restricted to the symbolic gesture it’s argued to be, it remains an offensive gesture. What message does it send when our country guarantees a special place of honour and authority for any person as a birthright?

Defenders of the monarchy

The reasoning I hear in defence of the monarchy ranges from ridiculous to incomprehensible.

I’ve been told that the legal implications of removing our Queen as the head of state would be too complicated to overcome, but that can’t be the case because other countries seem to have figured it out.

I’ve also heard arguments that the country has thrived under the monarchy and that severing our connection with the monarchy would fundamentally change who we are as a nation. The former is a facile take on a complex history and while I wouldn’t necessarily disagree with the latter, based on the way it was said I’m guessing they meant it was a bad thing.

Perhaps the sincerest, and simultaneously the most frustrating, defence of the monarchy in Canada is hearing people suggest that we give it up after the death of Queen Elizabeth II. The proponents of this position (some of my friends and family amongst them) have pointed out that Queen Elizabeth II seems like a nice woman “and she’s already been Queen for so long…” they say before trailing off.

Apparently wanting full practical and symbolic freedom to self-determination as a country is something you don’t want to offend anyone over.

Overall, most people don’t seem to care much, which is maddening in its own right. We just held an election in which 17,559,353 people participated by voting because they wanted a say in who governed our country. Of those, 6,930,136 voted for the Liberal party, giving them enough seats across the country to form a majority government and guaranteeing Justin Trudeau became the next prime minister of Canada – pending the approval of Queen Elizabeth II (or as the case happened to be, the governor general in her absence). Whether that decision is a symbolic gesture or not, it’s an affront to the nearly 18 million people who participated in the election.

The Queen holding the position of head of state is, like most unquestioned power dynamics, a wacky tradition. If we were to reinvent our political system from the ground up now, no one in their right mind would suggest we select our head of state to be handed down generation to generation like an old photo album. And they definitely wouldn’t pick an old lady to act as head of state for Canada from her castle in Britain. We can think of our current predicament as an accident of history at best and a vestigial remnant of a more openly colonial era at worst.

Either way, it’s time to make a clean break: there can’t be a monarch, symbolic or otherwise, in a serious democracy.