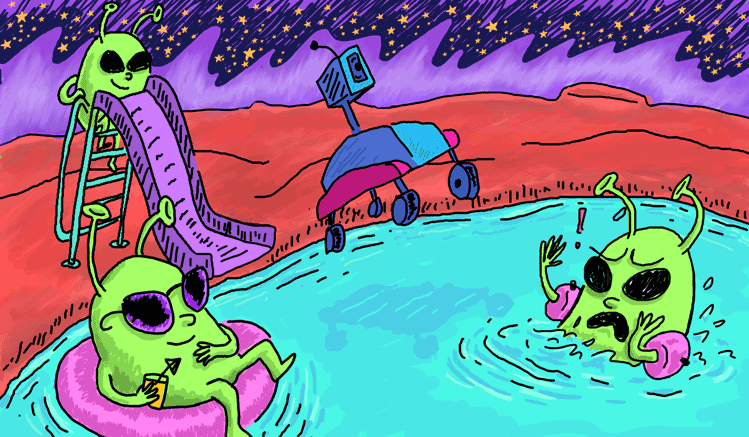 Recently NASA announced that liquid water has been found on Mars. This water was discovered after analyzing streaks that appeared on slopes which disappeared in cold weather and reappeared in warm weather. The discovery was made through data collected by the Mars Reconnaissance Orbiter (MRO).

Scientists believe that this liquid is a hydrated mixture composed of magnesium perchlorate, sodium perchlorate, and sodium chlorate. It is also thought that the streaks are the result of water being absorbed to the surface from below the surface.

Over the past decade, the MRO has been monitoring and collecting data on the red planet. The purpose of the MRO’s mission is to study the history of water on Mars by collecting photographs, analyzing minerals on the surface, measuring the distribution of dust and water in the atmopshere, and tracking Martian weather. The MRO was launched from Earth in 2005 and has been orbiting Mars since 2006.

Mars on average is much colder than Earth, with an average temperature of -50C. The streaks of salty water appear at a relatively warm -23C. The Martian polar ice caps were already known to contain frozen water and carbon dioxide.

The discovery of liquid water on Mars is significant because of the implication that the environment could potentially sustain life or have once sustained life. Life as we know it thrives in environments where liquid water is present.

A meteorite from Mars that was discovered in the Antarctic in 1996 was thought to possibly have the fossils of microbes, which may have come from the neighbouring planet.

The discovery of life on another planet would be one of the biggest discoveries in human history.

In an interview with MSNBC, Bill Nye, the CEO of the Planetary Society, said, “if we were to discover life on another world […] it would change this one. It would change the way everybody feels about what it means to be a living thing in the cosmos […] It would change human history.”

Mars is not the only place where scientists are looking for water. Many of Jupiter’s moons are thought to harbour water below the surface, including Europa, Ganymede, Callisto, and Enceladus. Saturn’s moon Dione is also a candidate for the presence of water.

The Dawn space probe is currently investigating Ceres, a dwarf planet in the asteroid belt, also thought to potentially have water.

The red planet, our closest neighbour in the solar system, has been a point of fascination and intrigue due to many of its similarities to Earth and potential as a future home for humans.

It is thought the planet may have once had oceans similar to Earth and may have been a habitable environment.

Currently there are several ongoing Mars missions. Aside from the MRO, there are the Spirit and Opportunity rovers, the Curiosity rover, Mars Express, Mars Odyssey, and the Mars Atmosphere and Volatile Evolution mission. The InSight mission is scheduled to launch in 2016.

These missions’ mandates include analyzing composition of the atmosphere, photographing its surface, searching for water, analyzing the Martian poles, studying radiation, studying the planet’s interior, and determining Mars’s potential for habitability.

Five reasons Winnipeg is still better than Mars, even if it’s colder sometimes