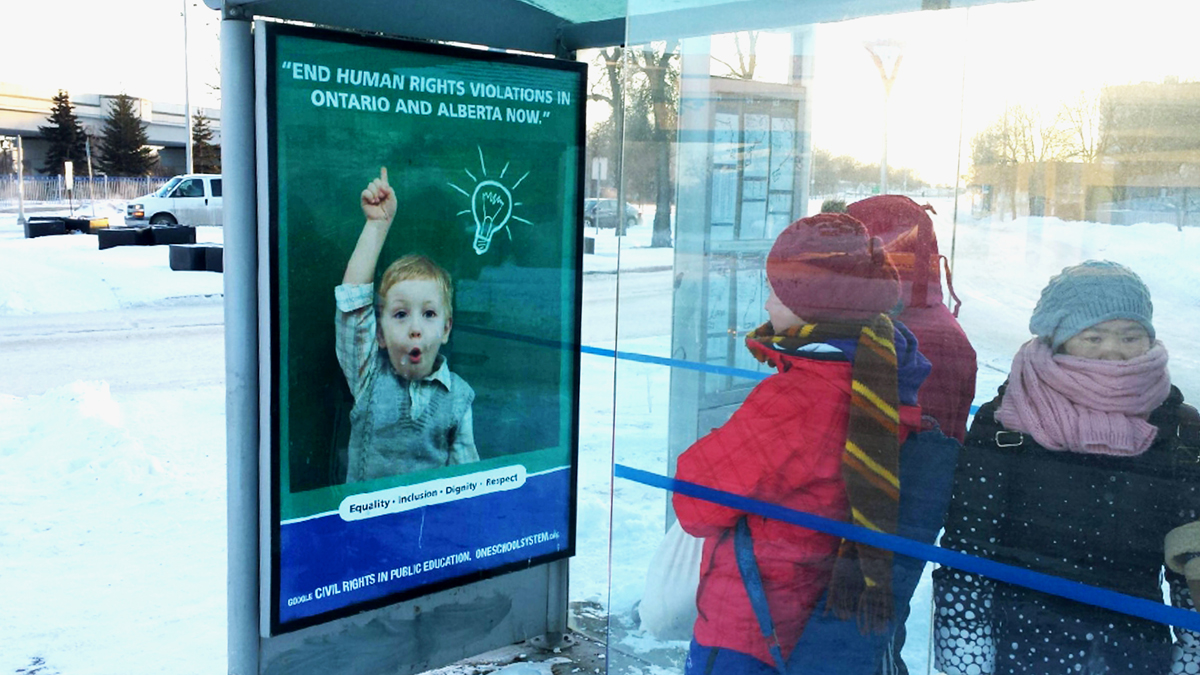 Winnipeg bus shelters are presently the platform for advertisements against policies for providing full funding to Roman Catholic schools while denying funding to other religious schools in Ontario’s public school system.

“End human rights violations in Ontario and Alberta,” reads one of the bus shelter billboards—on the route of the 160, travelling along the Southwest Transitway—facing north on Southbound Main Street at Stradbrook Avenue.

Other advertisements are located throughout the city along major transit routes to and from the University of Manitoba, including one at the bus stop at Osbourne Street and River Avenue, and another at Portage Avenue and Broadway Avenue.

Featuring slogans against human rights violations and an image of a child with an arm raised and a finger pointing upward, this particular advertisement is posted less than one kilometre from the Canadian Museum for Human Rights.

Launched in Winnipeg, the campaign is expected to run for eight weeks, with various other advertisements located throughout the city.

“This is a human rights issue right here in Ontario,” Thain said in an article published by the Ottawa Citizen.

Ontario’s school system
To this day, Ontario is the only province with legislation to exclusively fund religious schools of Roman Catholic faith.

The Government of Manitoba Public Schools Act requires schools to be non-sectarian but states that instruction in religion may be conducted in any school in Manitoba if authorized by a bylaw passed by school boards. On the other hand, the public education system in Ontario functions with funding for four school systems: English Roman Catholic, English non-Roman Catholic, French Catholic, and French non-Roman Catholic.

Anne Bayefsky of the Osgoode Hall law school at York University at the time, who brought the case forward to the UN back in 1999, said that Ontario should not end policies and funding to Roman Catholic schools, but should end religious discrimination by extending distribution of public funds to other religious schools.

The UN ruling meant that Canada had 90 days to respond. Their motion to comply meant that Ontario must extend funding to other religious denominations or end funding to Roman Catholic schools.

Provinces are constitutionally responsible for upholding the rights granted by national and international law. Section 93 of the Canadian Constitution Act of 1867 provides provinces exclusive jurisdiction over education.

Ontario’s minister of education at the time, Janet Ecker, said that she would not obey the UN’s decision.

The Legislative Assembly of Ontario passed Bill 30 to create a school board and implement full funding to Roman Catholic and Protestant separate school boards. In 1987, the bill garnered questions for the Court of Appeal, referred to by the Government of Ontario, about whether it was consistent with the Constitution of Canada, including the Canadian Charter of Rights and Freedoms. The Court of Appeal voted in the negative.

To this day, Ontario’s Education Act maintains policies about religious freedom and equality, stating that education programs shall provide for the study of different religions and beliefs without giving primacy to, or indoctrination in, any particular religion or beliefs. The Education Act also states that their policies about religion in schools do not apply to Roman Catholic or Protestant school boards.

Religion in education
In spring of 2014, the Ontario Superior Court ruled that parents have the right to exempt their youth from religious classes and activities in Catholic high schools.

That group, according to the director of the London Catholic District School Board, Linda Staudt, as reported by the Globe and Mail in August, does not include Catholic students whose parents designate themselves Catholic school supporters on property tax statements.

In response to the court decision that gave students the right to be exempted from religious classes, Thomas Walkom, the Toronto Star’s national affairs columnist, asked, “What’s the point of a religious school system if students can opt out of religion?”

Despite contradictions, some parents argued in favour of public funding for Catholic schools, believing that they provide better education, structure, and discipline than non-Catholic public schools.

In the upcoming provincial elections in Ontario, the debate is expected to remain stagnant.

Ads against religion allegedly discriminated against
The anti-separate school advertisements targeting Ontario’s public education system were slated to run in Winnipeg in time to coincide with the opening of the Canadian Museum for Human Rights. The advertisement campaign was reported to be strategically featured in Winnipeg—rather than in Ontario—to take advantage of the hype surrounding the opening of the museum.

The advertising campaign against discriminatory public funding and policies, sponsored by Thain, was supported by various groups such as Civil Rights in Public Education and OneSchoolSystem.org. The latter is “a non-governmental human rights organization and education advocacy group seeking the amalgamation of Ontario, Canada’s public and Catholic school systems into a single, secular school system for each official language.”

“Our corporate policy regarding any advocacy advertising that we place on any of our advertising spaces is that the advocate (and some means of contacting that advocate) must be clearly identified on the ad.”

The company asked for the advertisement to be modified to meet their advertising standards, Pattison later received a letter forwarded from Thain’s lawyer that said that Pattison’s refusal to run the advertisement was “an infringement of [Thain’s] human right to freedom of expression.”

“After receiving that letter, we did not receive any further communication or creative from Dr. Thain or his lawyer and the contract was subsequently cancelled,” Otto said.

The work was offered to Outfront Media, the advertisement company contracted for work on transit bus shelters.

Outfront Media accepted the offer. By Nov. 17, 2014, the advertisements were launched on bus shelters throughout Winnipeg, including instructions to “Google” information about the groups behind the sponsored advertisements.

The eight-week bus shelter advertisement campaign is set to end this week.